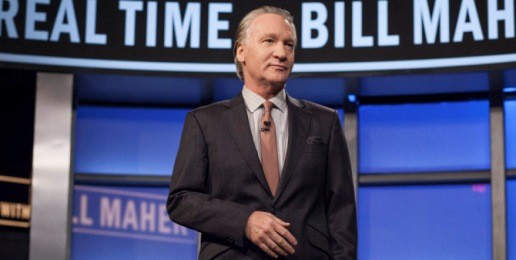 With the dozen Muslim killings fresh on the news, the self-proclaimed liberal addressed the massacre to the audience for what he believes it truly was: a jihadist attack by merciless Islamic terrorists on infidels for dishonoring their religion’s founder and prophet.

“It’s not a presume [sic] — no, no it’s Muslim terrorists,” Maher told Kimmel and his studio audience on ABC. “This happens way too frequently. It’s like … Groundhog Day, except the groundhog kept getting his head cut off.”

As a political commentator, TV host, writer, producer, actor and stand-up comedian, Maher showed his appreciation and admiration for the four French journalists boldly doing their jobs despite previous Muslim attacks on satirists. “Let’s also give some credit to this newspaper,” Maher pleaded with the crowd.

How is this not a Muslim attack?

While the three masked jihadists fired rounds from their AK-47 assault rifles at the Charlie Hebdo magazine headquarters in Paris, France — yelling “Allahu Akbar” (meaning their god [Allah] is greater) and screaming that they are “avenging the prophet” (Mohammed) — 12 French were slain, including four of the publication’s top editors and two police officers. Their vengeance was aimed at paying the publication back for satirical cartoons it published depicting the Muslim prophet Mohammed. After the incident, one of the three suspects turned himself in. The other two gunmen were killed earlier today when French police stormed a printing plant north of Paris where they were holding hostages.

Maher insists that no matter how offended Islamists might be by political cartoons, tolerating such heinous acts of revenge are despicable and unpardonable and should not be shielded under the veil of politically correct religious tolerance or marginalized as a random unorganized terrorist attack.

“For the crime of being satirists — for the crime of drawing cartoons — this has to stop, and unfortunately, a lot of the liberals, who are my tribe (I am a proud liberal) [are saying the attack was not Islamic in nature],” Maher proclaimed. “No, I’m not turning on them [liberals], I’m asking them to turn toward the truth as I have been for quite a while.”

So what kind of liberal denials is Maher talking about? Look no further than former Democratic National Committee (DNC) chairman Howard Dean, who said the Charlie Hebdo assassins are not Muslim despite their Islamic chants.

“I stopped calling these people Muslim terrorists,” Dean expressed on MSNBC’s “Morning Joe” about the jihadist murderers of a dozen Parisians. “They’re about as Muslim as I am. I mean, they have no respect for anybody else’s life — that’s not what the Koran says. Europe has an enormous radical problem. I think ISIS is a cult. Not an Islamic cult. I think it’s a cult.”

Such reasoning reflects the common montage frequently proclaimed by President Barack Obama, who has consistently insisted that ISIS (the Islamic State) “is not Islamic,” declaring Islam to be a “religion of peace.”

The liberal host could not see how his fellow leftists could rally behind a group in the name of cultural tolerance — one that stands against the very principles of freedom of speech and expression that liberalism champions.

But Maher could not look past his leftist colleagues just not getting it, such as CNN commentator Sally Kohn, who recently made light of the Charlie Hebdo killings by turning the attack toward conservatives.

Islam … really a religion of enlightenment and peace?

Maher pointed out the injustices and atrocities most of the world looks past out of so-called religious tolerance — or out fear of being avenged or being deemed as politically incorrect.

“There have been studies … We have facts on this, [such as Muslims’] treatment of women,” Maher asserted. “They studied 130 different countries. Seventeen of the bottom 20 were Muslim countries. In ten Muslim countries, you can get the death penalty just for being gay. They chop heads off in the square in Mecca. Well, Mecca is their Vatican City. If they were chopping the heads off of Catholic gay people, wouldn’t there be a bigger outcry among liberals?”

He maintains that zero tolerance should be afforded to a religious group that slaughters people in the democratic world for just doing their job — all because their religion, which most liberals call a “religion of peace,” calls for the execution of those who don’t submit to Allah or disrespect his prophet, Mohammed.

“So to bring it home to us, because we are satirists … and I deal with this subject particularly … it’s kind of scary that some people say you cannot make a joke,” Maher added. “That’s off-limits. We saw this with [North Korea’s] Kim Jong-Un.”

Publicly proclaiming to be no lover of religion, Maher concedes that they’re not all the same and that he particularly detests some basic religious precepts much more than others.

And he insists that it is not just the supposed “extremist” Muslims who advocate blood for not honoring Mohammed.

“That is mainstream in the Muslim world … When you make fun of the prophet, all bets are off,” Maher contends. “It’s also mainstream that if you leave the religion, you get what’s coming to you — which is death. Not in every Muslim country, not in the majority, but this is a problem we have to stand up to.”

Maher notes a big difference between Muslims and some other people groups he champions as a liberal, making the distinction that Islamists are the oppressors wielding their unchecked tyranny.

“And again, I’m the liberal in this debate … I was brought up in a liberal family,” Maher concluded. “The reason we were liberals is because we were against depression. I was a little kid when my father told us We‘re with Kennedy and against the Southern governors who stand in the doorways and don’t let black kids go to school. And all my life I’ve been for people who have been the downtrodden, the oppressed, the minorities. I’ve been for blacks, gays, women, Mexicans, whoever it is.”

Islam in America:
A Christian Response