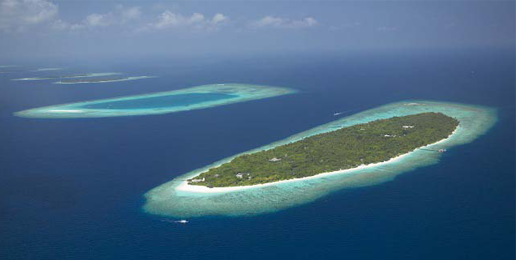 A report derived from government officials’ predictions shocked the world 30 years ago, warning that the tropical paradise archipelago would soon suffer the same fate as the lost city of Atlantis.

“A gradual rise in average sea level is threatening to completely cover this Indian Ocean nation of 1196 small islands within the next 30 years,” the Agence France-Presse (AFP) reported in September 1988.

Serving alongside the UN at the time, Environmental Affairs Director Hussein Shihab gave precise “calculations” about the extent to which the Maldives would become submerged.

“An estimated rise of 20 to 30 centimeters in the next 20 to 40 years could be ‘catastrophic’ for most of the islands, which were no more than a meter above sea level,” Shihab told AFP at the time.

The alarmism did not stop there, as many islanders were led to believe by affiliated of the global peacekeepers that they had just several years to evacuate the island before it became inhabitable.

“The article went on to suggest the Maldives – along with its 200,000 inhabitants – could ‘end’ sooner than expected if drinking water supplies dry up by 1992 ‘as predicted,’” The Daily Caller News Foundation (DCNF) reported. “Today, more than 417,000 people live in the Maldives.”

Power the Future Executive Director Daniel Turner mocked the alarmists at the UN and their affiliated climatologists.

“Call Noah and have him build another Ark,” the leader of the pro-energy group mused while speaking with DCNF. “Bring out the Coast Guard. Send all the boogie boards and floaties you can find – for the Maldives is going down!”

For decades, the UN has claimed that the Maldives would be the first to go under the sea once the “catastrophic” effects of climate change induced by human pollutants began.

“The Maldives are among the island nations often held up by United Nations officials as being on the ‘front-lines’ of man-made global warming,” DCNF Energy Editor Michael Bastasch noted.

In fact, Republic of Maldives President Mohamed Nasheed addressed other world leaders at the UN General Assembly Summit on Climate Change in August 2009 to alarm attendees that entire populations across the world will drown as glaciers melt – and increase the ocean depth by just 4.5 feet – because of manmade airborne pollution.

“You know that with a sea-level rise of over 1.5 meters, hundreds of millions of people would be dead,” Nasheed told the UN Chronicledays after speaking at the summit. “They would simply be wiped out.”

Behind the dire warnings of the Green agenda is reportedly the green glow of money, but the alarmism was not enough to quickly secure the exorbitant funds ultra-environmentalists were trying to pander from climate-change believing nations across the globe.

“The island nation was among the first to apply for Green Climate Fund aid, but the funding hasn’t been flowing, according to The New York Times,” Bastach explained.

Just last year, Maldives Energy and Environment Minister Thoriq Ibrahim made it clear that he wanted immediate access to funds … before it was too late.

“That’s too long to wait,” Ibrahim insisted to The New York Times in November. “There’s no use having a fund somewhere if you can’t access it quickly.”

However, 30 years of panic did not usher in the consuming seas or the desired funding for the UN, as the Maldives are still perched right above sea level, with its beautiful sandy beaches still beckoning tourists to lay down their towels and unfold their beach chairs – not to head for high ground … if there were any.

“The Maldives are indeed low-lying islands with its highest point only reaching about eight feet above sea level,” Bastach informed. “But obviously, decades-old warnings [that] the Maldives were on the verge of being swallowed by the seas didn’t pan out.”

Getting bigger, not smaller?

Despite what many climatologists report concerning rising sea levels, research conducted by New Zealand scientists on Tavalu’s nine atolls and 101 reef islands between 1971 and 2014 indicates that the Maldives and other coral islands in the region are actually getting larger – not shrinking and sinking.

“The Pacific nation of Tuvalu – long seen as a prime candidate to disappear as climate change forces up sea levels – is actually growing in size, new research shows,” a report on a University of Auckland study revealed in February. “It found eight of the atolls and almost three-quarters of the islands grew during the study period, lifting Tuvalu’s total land area by 2.9 percent – even though sea levels in the country rose at twice the global average.”

In fact, Paul Kench – co-author of the research – argued against climate change alarmists’ assertion that low-lying island nations will soon succumb to rising seas and be completely submerged.

“We tend to think of Pacific atolls as static landforms that will simply be inundated as sea levels rise, but there is growing evidence these islands are geologically dynamic and are constantly changing,” Kench contended the scientific report on the study. “The study findings may seem counter-intuitive, given that (the) sea level has been rising in the region over the past half century, but the dominant mode of change over that time on Tuvalu has been expansion – not erosion.”

This argument for island expansion – as opposed to island shrinking that global warming climatologists often claim – is corroborated by other research, as well.

“The results [of the Kiwi study] echoed a 2015 study by the same lead author that also found coral island expansion,” Bastach noted. “Study lead author and scientist Paul Kench told The New Scientist ‘that the Maldives seem to be showing a similar effect.’”

More warnings of old not coming to fruition

Several months before the UN’s September 1988 alarmism attempting to scare inhabitants off the Maldives with visions of overwhelming ocean waters, The New York Times was already busy putting illusions of catastrophic rising seas and temperatures in the minds of Americans through ominous predictions.

“[If] the current pace of the buildup of these gases continues, the effect is likely to be a warming of 3 to 9 degrees Fahrenheit [between now and] the year 2025 to 2050,” the Times’ Philip Shabecoff warned in a June 1988 article, according to WND. “[This should produce a rise in seal levels of] one to four feet by the middle of the next century.”

WND noted that Shabecoff was using predictions of Hansen and Michael Oppenheimer to come up his anticipated figures.

Such cataclysmic forecasts by past and present climate change activists have been derided as the foreboding climatic events never actually take place – or even appear to be taking shape, for that matter.

“In August, Rob Bradley, Jr., the CEO and founder of the Institute for Energy Research, described Shabecoff’s claim as the ‘opening salvo’ of global-warming activism, and also pointed to the failure of claims made by NASA climate scientist James Hansen and Al Gore,” WND’s Art Moore recounted. “Bradley – who has testified before the U.S. Congress as one of the nation’s leading experts on the history and regulation of energy markets – argued that the mid-point of Shabecoff’s predicted warming would be six degrees.”

He called out the global warming alarmists for grossly overestimating rising temperatures and sea levels.

“At the 30-year mark, how is it looking?” Bradley asked on his website, WattsUpWithThat.com. “The increase is about one degree – and largely holding (the much-discussed ‘pause’ or ‘warming hiatus’).”

It was also stressed that a very modest global warming trend has been in effect for thousands of years.

“[The world has naturally warmed since the end of the Little Ice Age, which is] a good thing – if climate economists are to be believed,” Bradley added. “[Concerning rising sea levels,] the exaggeration appears greater. Both before and after the 1980s, decadal sea-level rise has been a few inches – and it has not been appreciably accelerating.”

The energy expert asserts that the extremist alarmism disseminated by climate change scientists and the activists behind them will fade away into the myths of yesteryear.

Child Abuse in Plain Sight
b
a
x
r