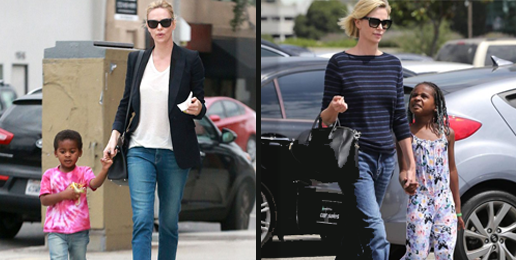 During Holy week, a manifestly unholy thing was revealed about actress Charlize Theron. It was revealed that she’s pretending along with her 7-year-old son Jackson that he is a girl. Theron permits him to dress in distinctly female clothes, wear his hair in long braids, and refers to him as “her,” declaring he is “every bit as much a girl as her three-year-old sister.” Well, except for those pesky scientific realities like his penis and every cell of his body which declares his male DNA.

Theron made this astoundingly foolish statement:

Yes, I thought she was a boy…. Until she looked at me when she was three years old and said: “I am not a boy!”

A fatherless 3-year-old boy says he’s not a boy, Theron believes him or pretends to believe him, and the state doesn’t remove him from her home?

The government conducts extensive background checks, home inspections, and interviews to determine parental fitness, because the government has a role in protecting both the rights of individuals as well as the public good. Today we have a government that not only allows parents to facilitate the chemical sterilization and surgical mutilation of their children but mandates that adoption agencies place children only in homes that will permit such grotesque abuse.

Theron doesn’t explain exactly how she knows her son’s perception that he’s not a boy proves he’s a not boy, nor does she explain why he dresses in pink tutus since the Left tells us pink tutus have nothing to do with femaleness. Isn’t Theron reinforcing arbitrary and destructive stereotypes through his clothing and hairstyle requests?

“those institutions standing between the individual in his private life and the large institutions of public life.” They help bridge the gap between each of us and the overarching society that we live in.

The two mediating structures over which “progressives” have not yet gained total control are the family and the church, but they’re working like the devil to control those. Nothing delights “progressives” quite like the prospect of using power to quash parental rights, intellectual diversity, and the First Amendment.

The arrogance and ignorance of Leftists who control one of our large cultural institutions—the one by which “progressives” will capture the mediating institutions of family and church, thereby securing  their iron-grip on the larger institutions—is exposed in a short video of Kerrie Torres, Assistant Superintendent of Educational Services in the Brea Olinda Unified School District in California who was recently asked why the school is teaching high school freshmen about pedophilia and pederasty.

This is done because we are discussing historical perspectives of how gender relations and different types of sexual orientations have existed in history. This is something that’s occurred in history, so this is really important to include.

Many believe pederasty is a form of pedophilia. Those people are unaware of the finer distinctions the sexually perverse among us make between different forms of perversion. “Chronophilias” are age-related sexual attractions, such as pedophilia, hebephilia, and ephebophilia—terms that signify the age of children that arouse the sexual interest of adults. Pedophiles prefer prepubescent children as their victims. Hebephiles like their victims to have reached puberty but not be too old, so 11-14 is their target group. Ephebophiles are fond of minors in later adolescence, preying on 15-19-year-olds.

But there are already some who believe “chronophilias” should be considered “sexual orientations,” which is what Torres seems to think. In the service of slowly normalizing yet another form of sexual deviance, they’ve renamed pedophilia “minor attraction,” and view it as a natural “sexual orientation” that ought not be stigmatized.

A 2013 article in the LA Times reports that

pedophilia once was thought to stem from psychological influences early in life. Now, many experts view it as a sexual orientation as immutable as heterosexuality or homosexuality. It is a deep-rooted predisposition—limited almost entirely to men—that becomes clear during puberty and does not change.

Who believes the current exclusion of hebephilia and ephebophilia from the list of sexual orientations will endure, and why should it? If, as the Left claims, “love is love,” isn’t age an arbitrary, socially-constructed, exclusionary limitation?

To conceal from scrutiny the next phase of the sexual devolution, Leftists huff indignantly that they would never sanction “minor attraction” because minors can’t offer consent. But how long will it be before “progressives” argue that 14-year-olds, 13-year-olds, and even 12-year-olds are, indeed, capable of offering meaningful consent. After all, if they are old enough to consent to an abortion or to be euthanized (as they are in Belgium where a 9- and 11-year-old chose to be euthanized), aren’t they old enough to consent to sex?

Moreover, many homosexuals believe not all sexual encounters between adults and minors are abusive. Many argue they’re even beneficial. Milo Yiannopoulis got himself into hot water for admitting what many homosexuals believe, which is that he was not harmed by his sexual interactions as a young teen with an adult man. Eve Ensler, lesbian and author of the infamous Vagina Monologues, wrote a scene about “sexual healing” between a 13-year-old girl and an adult woman—a scene she was forced to change due to public opposition. She changed the teen’s age to 16. Can’t have the public learning the unsavory truth about the homosexual community—yet.

In every society throughout history and across cultures that has accepted homosexuality, the dominant form it assumes is between an adult male and a pubescent boy. As more Americans become blinded to the wickedness of homosexuality or unwilling to accept the persecution that will come to those who speak truth about it, expect to see the Left clamoring to lower the age of consent.

Researcher Michael Seto, Forensic Research Director at the Royal Ottawa Health Care Group and Associate Professor of Psychiatry at the University of Toronto, calls  chronophilias “sexual orientations for age.” He explains that “up to 1 percent of men” experience pedophilia, which makes it perhaps twice as common as “transgenderism.” Pedophilic men say their enduring attraction began very early in life, and research suggests brain differences between pedophilic men’s brains and non-pedophilic men’s brains.

Aren’t these the same factors (i.e., age of emergence of attraction, intractability of attraction, and brain chemistry) that Leftists use to justify cultural approval of homosexuality?

I think chronophilias are the result of errors in age detection, where heterosexual male preferences for youth cues… are not offset by sexual maturity cues…. For pedophilia, hebephilia and ephebophilia, the youthfulness cues dominate.

This raises the question, why is no one permitted to examine whether a homosexual orientation—long known to be fluid—could be the result of some type of cue errors perhaps resulting from environmental factors?

Another question arises: Why should Torres stop at chronicling the chronophilia of pederasty for students. Since zoophilia has existed throughout history and since some view it as a sexual orientation, isn’t it equally important to have students study it?

In a study published in 2005 titled “Is zoophilia a sexual orientation,” researcher Hani Miletski wrote,

It was found that some people  (the majority of the participants in the current study) have feelings of love and affection for their animals, have sexual fantasies about them, and admit they are sexually attracted to animals—three components that describe sexual orientation. The current study further reveals that the majority of its participants reported being happy and not wanting to stop having sex with animals.

Why should speciesism—that is, “prejudice or discrimination based on species especially discrimination against animals”—be allowed to limit love and the definition of “sexual orientation”? There are people who identify as zoophiles. They not only enjoy sex with animals but feel affection for them. They too have existed throughout history. Torres should be chomping at the bit to teach teens about the love of man for horses.

The danger of including “sexual orientation” to antidiscrimination policies and laws should by now be obvious to all.

Two worldviews are colliding with cataclysmic results. The worldview shaped by historical Christianity views the world as a place purposefully created by God with a physical and moral reality, both of which are corrupted by the Fall. We need guidance to live rightly, and we rebel against God’s created order and guidance at our own temporal and eternal peril.

The alternative worldview shaped by worship of fallen man views the world as a place of randomness and purposelessness that self-creation and satiation of temporal desires provides the only meaning we can hope to find.

Theron expressed that vitiated and attenuated view when she said this about her children:

They were born who they are, and exactly where in the world both of them get to find themselves as they grow up and who they want to be, is not for me to decide. My job as a parent is to celebrate them and to love them and to make sure that they have everything they need in order to be what they want to be.

Neither Theron nor other “progressives” have a clue about the job of parents or the needs of children.

As America descends into spiritual, moral, and intellectual chaos, the first victims are children.