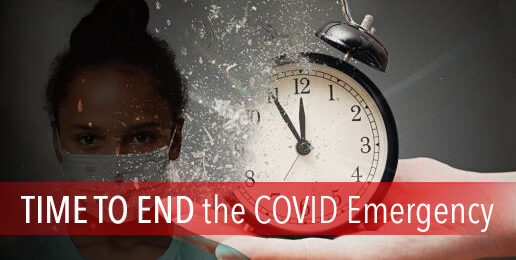 The time has come for states and the federal government to end their COVID declarations of emergency and the accompanying closures, restrictions, propaganda, distancing requirements, forced masking and vaccine mandates. COVID may circulate at some level forever, but Americans can now protect those vulnerable to it with standard medical procedures. They can treat it as they would the flu. Emergency measures need continuous justification and there isn’t one anymore.

Omicron has become the dominant variant. Over the past two months, the Delta variant strain—Omicron’s main competitor and the most recent aggressive version of COVID—has been declining in the U.S. That is true both in proportion of infections (62 percent on Dec. 18 fell to 2 percent on Jan. 15, then to 0.1 percent on Jan. 29) and the number of daily infected people (97,000 to 14,000 to 400), according to the Centers for Disease Control and Prevention. During the next two weeks, Delta cases will almost certainly decline to the point that the variant essentially disappears, as did the strains that came before it.

Omicron is mild enough that most people, even many in high-risk categories, can adequately cope with the infection. Omicron infection is no more severe than seasonal flu, and generally less so. In America, many of those vulnerable to COVID are already vaccinated and protected against severe disease.

Treatments have also vastly improved since the early days of the pandemic. The medical community has learned much about the utility of inexpensive supplements like vitamin D to reduce severe disease risk, and there are a host of good therapeutics available to prevent hospitalization and death should a vulnerable patient become infected. For young people, the risk of severe disease—already low before Omicron—is minuscule.

There’s evidence that Americans have built up additional immunity through the recent Omicron wave. Daily Omicron infections peaked around Jan. 11 and have been declining. Mortality from COVID, including some from remaining Delta cases, is now declining as well. Influenza in typical seasons peaks in mid-February. That Omicron has been decreasing since early January suggests that the decline may have less to do with seasonal factors than built-up population immunity. If substantial new variants arise, this suggests case and death counts could still remain relatively low.

There is no longer any justification for the federal government and states to maintain their declarations of emergency. The lockdowns, personnel firings, shortages and school disruptions are doing at least as much damage to the population’s health and welfare as the virus. The state of emergency is unjustified now, and it can’t be justified by fears of a hypothetical recurrence of a more severe infection at some unknown point in the future. If the government can grant itself such power, then the limits imposed by the federal and state Constitutions are effectively meaningless.

Americans have sacrificed their rights and livelihoods for two years to protect the general public health. Government officials must now do their part and give Americans their lives back.

Dr. Risch is a professor of epidemiology at the Yale School of Public Health. This op/ed was originally published by the Wall Street Journal.

Wonder Land: President Biden must declare the pandemic over,
so that Americans can return to normal lives, in which Covid-19 is treated as endemic.
Images: AFP/Getty Images/Image of Sport/Zuma Press Composite: Mark Kelly