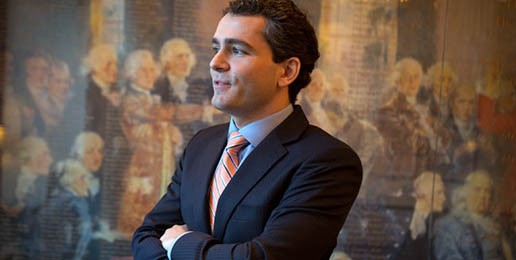 The Washington Post published a profile of Ryan T. Anderson, a Heritage Foundation fellow who is a leading intellectual defender of traditional marriage, and a genuinely nice guy. Excerpt:

Justice Samuel A. Alito Jr. cited his work twice in his dissent from the court’s opinion in United States v. Windsor, which struck down part of the federal Defense of Marriage Act. Anderson is becoming a prominent face of the opposition in news media appearances.

His appeal in part owes something to counter-programming. A Princeton graduate with a doctorate in economic policy from Notre Dame, his views are at odds with other elite academics with whom he has so much in common. They are the opposite of those in his demographic. A devout Catholic, he nonetheless believes it a losing argument to oppose the legality of same-sex marriage on religious or moral grounds.

Also in his favor: He’s telegenic, an enthusiastic debater, and he can talk for hours.

But Klarman, who wrote the book “From the Closet to the Altar: Courts, Backlash, and the Struggle for Same-Sex Marriage,” adds, “It’s almost inconceivable to me that he persuaded anyone in the audience by his arguments.”

Anderson says he has been taking unexpected positions all his life, as an antiabortion activist in college and as a conservative at the liberal Quaker Friends School in Baltimore, where he grew up.

He was the fourth of five boys, and his parents paid for all to get the rigorous academic background Friends School provided. But they told their sons that college would be on them.

Anderson paid for the part of his Princeton schooling that scholarships did not cover with the proceeds from a lawn business — Cutting Edge, he named it — started when he was an adolescent.

He seems almost surprised at the reaction he provokes.

Read the whole thing. So, when the Friends School of Baltimore posted on its Facebook page a link to the WaPo story about its well-known alumnus, students and alumni freaked out, prompting this gutless response by the head of school:

As many of you know, earlier today we posted a Washington Post article profiling a Friends School alumnus who is a prominent national legal advocate opposing same-sex marriage. At 5:45 this evening, I removed that post from this page. I will be posting a more detailed explanation of why I have chosen to do so later this evening.

I regret that by highlighting this article, we have caused pain to many members of our community, first and foremost, to our students. We have no greater responsibility than to continually strive to create a safe, nurturing environment for all the children in our care, and it is clear to me that leaving this article in place on our Facebook page is counter to that goal. – Matt Micciche

“Safe”? A profile in the Washington Post makes these crybabies unsafe? The hysterical mob mentality here is disgusting.

Ryan T. Anderson, a devout Catholic, advocates respectfully and intelligently for a position that an overwhelming majority of Americans held 20 years ago, and that a third of all Americans hold today. Hillary Clinton and Barack Obama professed it until practically the day before yesterday. And yet he is some kind of Nazi to these elites who spend nearly $30,000 per year to send their kids to this playpen?

Intellectually bankrupt, morally corrupt. Illiberal elitist liberalism at its ugliest. These people have the power, and will have the power. It unnerves me to think of what they will do with it.

This really upsets me more than I can quite convey. Twelve years of Ryan Anderson’s being part of this school community, and his family’s long devotion to it, mean nothing — all because he defends his faith, and does so in an intellectually robust, winsome manner. They’ve basically thrown him out of the community because he doesn’t conform on this one issue. It’s madness. Where does it stop?

“Trans”-Cult Has Religious Liberty in Its Sights