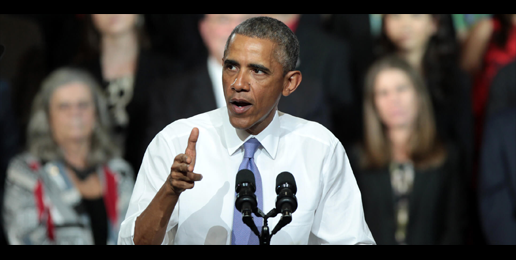 I don’t doubt for a moment that we still have race issues to address in America. And I don’t believe that, to date, we have fully overcome the legacy of hundreds of years of slavery and segregation in our history. At the same time, I do not accept former President Obama’s claim that the 2016 election of Donald Trump was, in part, a reaction to having a Black man in the White House.

In a widely reported excerpt from his forthcoming book Promised Land, Obama claims that “millions of Americans” were “spooked by a Black man in the White House.”

To quote him more fully, he argued that Trump “promised an elixir for the racial anxiety” of “millions of Americans spooked by a black man in the White House.”

These same Americans, we are told, were prey to “the dark spirits that had long been lurking on the edges of the modern Republican Party – xenophobia, anti-intellectualism, paranoid conspiracy theories, an antipathy toward black and brown folks.”

Yes, he writes, “It was as if my very presence in the White House had triggered a deep-seated panic, a sense that the natural order had been disrupted. Which is exactly what Donald Trump understood when he started peddling assertions that I had not been born in the United States and was thus an illegitimate president.”

How should we respond to this?

There are certainly White racists in America, and they must have hated having the Obamas in the White House. (It may surprise you to know that I have never met such a person face to face, heard from them on my radio show, or, to my memory, interacted with them on social media. I’m sure they exist. I just don’t know any of them).

And, while I do not believe Trump is a racist, he surely knows how to push certain buttons to get people from different backgrounds in his camp.

But the fact of the matter is that there were no anti-Black, White supremacist, race riots when Obama was elected, nor were there any protesting his presidency during his eight years in office.

Not only so, but no one was boarding up stores in anticipation of his victory, which would surely have been the case had “millions of Americans” been “spooked” by his election and had his victory “triggered a deep sense of panic.”

Where, pray tell, was that panic? What evidence does the former president provide?

The reality is that in 2008, Obama received 43 percent of the White vote (compared with 55 percent for McCain), which hardly speaks of a racist nation in panic. In fact, going back to 1980, this tied for the highest percentage of White votes for a Democratic candidate.

And in 2012, despite fears that Obama would see a significant drop in White votership, the percentage only dropped from 43 percent to 39 percent.

The Washington Post even carried a November 8, 2012 headline reading, “President Obama and the white vote? No problem.” As the article noted, Obama “won a clear popular vote victory — with a majority of his total vote nationwide coming from white voters.”

Where was the deep sense of panic? Where was the extreme, racist reaction? Where were the many millions who were spooked by a Black man in the White House?

The reality in 2012, as in 2008, is that the majority of Obama’s total vote count came from White voters. That is a simple demographic fact.

But Obama’s claims are nothing new. He was, sadly, a divisive leader, specifically when it came to race.

This very eloquent, charismatic, and gifted leader who could have helped unite our nation only divided us further, promoting identity politics and playing the race card. President Trump simply deepened that divide and poured salt into the wounds (while at the same time increasing the racial and ethnic diversity of his base). That, to me, was a terrible missed opportunity from our first Black president.

Many Americans felt as I did, unable to vote for Obama because of policy but excited to have a Black leader in the White House.

Personally, I was hoping that that this was yet another step towards racial healing, feeling it could also bring great hope to Black Americans. Anything is possible. Dream your dreams. You could be president one day, too.

That’s how my trainer at the gym expressed things. A married Black man with a young son, he told me that he never expected to see a Black president in his lifetime. Now, his own son could see that anything was possible here in America.

Interestingly, earlier in the year, while taking a short flight on my way to California, I sat next to a Black bishop, leading to some wonderful interaction.

I asked him, “In your opinion, what was the aftermath of the Obama presidency?”

I was shocked to hear that perspective from this very learned, spiritually sensitive brother, seeing that I had never in my life heard such a sentiment from a White colleague or friend.

Perhaps such sentiments do exist, and to the extent that they do, they should be exposed and denounced, loudly, clearly, and categorically.

But that is not why more than 70 million Americans voted to elect (or, reelect) Donald Trump. And that’s why Lawrence Jones, himself Black, was right to say, “I feel like President Obama has started to demonize some of the very people that voted for him.”

He added, “I don’t like the demonization … to paint 70 million people as just these cold-blooded racists. I don’t think that’s true.”

Indeed, “When you take the highest office in the land, you’re going to receive criticism and you can’t just say that it is deeply rooted in race.”

Every survey I have done indicates that a solid, conservative Black candidate would garner far more votes from White conservatives than would a White leftist. No doubt about it. Ideology, not race, is the driving issue when it comes to our vote.

Unfortunately, just when former President Obama could have brought words of healing to a deeply divided, hurting nation, he has pushed identity politics again and insulted millions of well-intentioned Americans.

It looks like healing will not come from either Obama or Trump (or Biden). We’ll have to make it happen on our own (with God’s help).