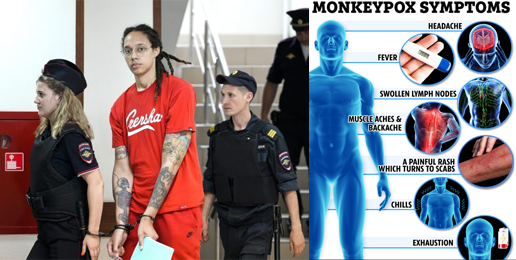 Brittney Griner is the gun-toting, hashish-vaping WNBA player with a temper who seduced, assaulted, and abandoned her pregnant former “wife.” She’s now in a Russian prison for violating their drug laws. Despite Griner’s support for the Second Amendment, her abusive treatment of women, and her arrogant disrespect for another culture demonstrated by breaking their laws, the left will celebrate her. Why? Because Griner is a lesbian and hates America’s national anthem.

It’s curious that Griner, who happily profited from playing basketball in Russia for “6 1/2 years,” has never publicly condemned the Russian government or Russia’s national anthem even though Russia is far more oppressive than America.

It’s curious too that Griner’s possession of a drug illegal for both recreational and medicinal purposes in a country where she lived for 6 1/2 years could be “unintentional.”

No wonder celebrities love Griner. Like them, she stands steadfastly and courageously in defense of her leftist principles unless they get in the way of making money.

Quote ‘o’ the Day comes from two homosexuals writing about the Monkeypox scourge for GQ Magazine, one of the writers of whom is a doctor:

[C]alling for abstinence is not effective. It’s also, we would argue, not moral to tell queer people, who have been told time and again by the world not to fulfill what is a basic human need, to simply do so again.

First, there exists no “basic human need” for men to engage in homoerotic sodomy or oral-anal acts—none.

Second, if engaging in homoerotic sodomy and oral-anal acts were “basic human needs,” then surely being with loved ones, including dying relatives, is a basic human need. And it’s a need that the government denied thousands of people during the Communist Chinese Covidpox. People die from loneliness. People don’t die from abstaining from homoerotic acts.