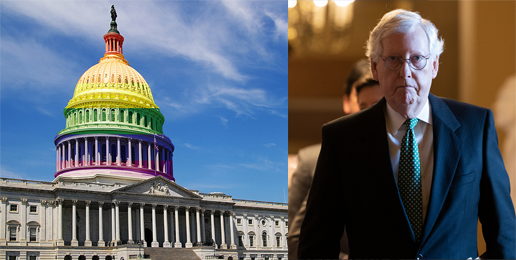 As of this writing, 85 national and state organizations—including the Illinois Family Institute (IFI)—have signed a letter written by the Alliance Defending Freedom (ADF) and sent to U. S. Senate Minority Leader Mitch McConnell denouncing the ironically named “Respect for Marriage Act” (H.R. 8404)” and urging him and U.S. Senate colleagues to reject it.

As IFI has historically warned, citizens must pay more attention to how the language of a proposed law could be interpreted and applied than how the bill’s sponsors claim it will be applied. For example, H. R. 8404’s supporters claim that the Dis-Respect for Marriage Act will merely codify federal protections for existing same-sex marriages in the event that the right to define marriage (rightfully) returns to the states.

Turncoat Collins deceitfully claims that “this bill is very straightforward. … All it does is put into federal law the protection for the million same-sex marriages that are out there today.”

Well, that is decidedly not all that the Dis-Respect for Marriage Act will do if it becomes law.

As I recently wrote,

[T]he Disrespect for Marriage Act recognizes in federal law “any marriage that is valid under state law.”

While there is a provision requiring states to recognize marriages from other states, that provision specifically limits the type of marriages that must be recognized to those composed of two people. No such limit is placed on the federal government in the Disrespect for Marriage Act.

The Dis-Respect for Marriage Act requires the federal government to recognize any type of union legally recognized as a “marriage” in any state, and if leftists can redefine “woman” to include men, imagine the bizarre ways they will redefine “marriage.”

If one state were to recognize plural relationships, incestuous relationships, platonic friendships, or adult-minor relationships as legal “marriages,” the federal government would be required to do so also.

Further, the Dis-Respect for Marriage Act states the following:

ADF explains that the U.S. Supreme Court has held that the term “under color of State law” “might apply where an organization participates in a joint activity with a state, is performing a function traditionally performed by the government, or when its operations are entwined with government policies.”

ADF clarifies how leftists will use the Dis-Respect for Marriage Act to erode the liberty of people of faith and faith-based organizations:

The passage of the corrosive H.R. 8404 would be a disaster for children, families, religious liberty, and the nation. The arc of the moral universe in America is being bent backwards toward evil, and the only political party that has been standing for truth is bending too.

Please send a message and then follow up with a phone.

**UPDATE: According to various news sources, the U.S. Senate vote on H.R. 8404 has been pushed back to September.