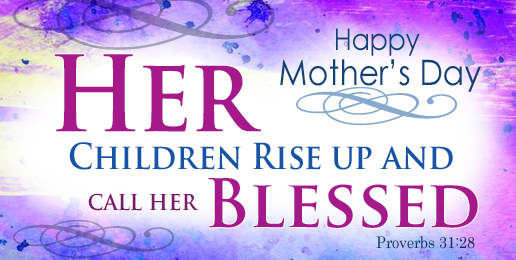 Being a mother is often a thankless job. I know because I wasn’t properly thankful for my own mother when I was young (sorry, Mom!), and I also see how often my own young children take my wife for granted.

Not only that, but our culture is becoming increasingly conflicted about motherhood. On the one hand, we do recognize the importance of moms, and many of us are thankful for the role our own mother played in our life. But at the same time, we’re seeing a general devaluing of a mother’s role and the whole concept of motherhood. Too often children are viewed as encumbrances to a woman’s education, career, or life goals.

In other words, having kids is fine and good once you’ve reached a certain point in your life, but they’re not worth sacrificing your future for.

Perhaps that’s why we’re seeing the average age for first-time motherhood increasing and the number of intentionally childless couples on the rise.

The holy purpose of bearing and raising children is being lost in our culture. Raising the next generation is increasingly an afterthought to college and career—something we do after everything else has been taken care of, and even then perhaps only if we really want to and think it will be meaningful and fulfilling.

With all of that in mind, I’d like to say emphatically and without equivocation that moms matter. Raising the next generation for the glory of God isn’t a lowly calling. It’s not a second-class job compared to pursuing a career, running for office, writing a book, traveling the world, or starting a business.

That might not be the message of the world, but it’s a message we need to hear.

If the value of a job is determined by how long its impact lasts, you’d be hard pressed to find a calling that outranks motherhood. After all, as a mom, you’re shaping lives that will most likely last for decades on this earth, and then for eternity beyond. Not only that, the children you’re raising will impact others for both life and eternity as well.

I’m not here to demean anyone’s career, but how many professional women can say that their daily responsibilities and decisions will resound through endless ages to come?

If the value of a job is determined by the effort it demands and the hours it requires you to be available, you would again be hard pressed to find a calling that surpasses motherhood. Few other jobs require you to be constantly available and on call any hour of the day or night. The demands are high and the sacrifices are real.

If the value of a job is determined by the wisdom required to perform it well, motherhood again outranks virtually all other options. How much wisdom does it require to nurture young hearts and minds, helping our children learn to navigate life in a way that honors God and allows them to lead fruitful lives?

Frankly, such wisdom can only come from God. But I believe He delights in granting it to the overwhelmed mom who cries out for it with a needy and believing heart.

By any of these measures, motherhood is indeed a high calling.

And I would dare say you know that. But perhaps it doesn’t hurt to be reminded.

Speaking more personally for a moment, it’s no exaggeration to say I don’t know where I would be without my mother. She wasn’t perfect, but she worked faithfully to fulfill the calling God gave her.

And that, I think, is something all parents would do well to copy.

There are so many things a godly mother should be: kind, just, capable, encouraging, wise, firm, and loving, just to name a few. But these would matter little if they weren’t undergirded by daily faithfulness.

Faithfulness as a mother matters because motherhood itself matters. Your children matter. And they need you.

Don’t let anyone tell you that being a mom isn’t important. And don’t let our messed up culture get you down, feeling like you’re a second-class citizen if you’ve made the noble choice to be a full-time mom instead of pursuing a career.

So I challenge and encourage you: be a faithful mom. Fulfill the high calling God has given you.

And one day, your children might even say thank you.