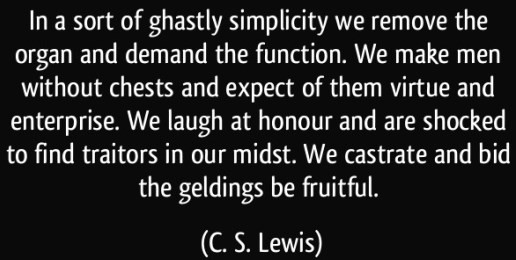 The world will soon belong to the men without chests. As it is, many of the first-world nations are already steered by such men, including America herself. Britain, France, Iraq, Spain, and our own United States are all run by men without chests. Looking at Congress, the courts, and the heads of Industry, this epidemic is not confined to the walls of the White House either. Our schools are generating men without chests at a spectacular rate. Masculine traits are eradicated from young boys before they graduate from high school and the mission continues in college where being male is considered a deformity which requires an apology.

I still remember sitting in a Philosophy & Feminism class in college (I was there to pick up chicks, don’t judge…) when the professor embarked on an epic diatribe against manhood in our society. She was halted in her rant when an errant bee found its way to the front of the class, forcing her to shriek and cower behind her lectern. She only emerged after a guy in the front row stood up and escorted the bee out the nearest window. Oblivious to the irony, she stepped forward and continued to rant about the uselessness of all things male.

Pop culture does a great job of watering down masculinity when it affirms that pink is cool, to remain dependent into mid-adulthood is natural, and that parents exist for sponging until one can find a woman from which to sponge. When Maury interviews the (so-called) man who has more Baby Mamas than years of school completed, our society’s reaction is tolerant amusement instead of indignant outrage.

Sadly, women are encouraging this male devolution in many ways, ranging from well-meaning overprotectiveness during child-rearing to actively engaging in relationships with losers who don’t merit affection or attention. Ladies, this has to stop. Quit encouraging juvenility in your dude. Whether you are deliberately attempting to keep him docile and under your control or doing it because that’s what you learned at home about managing a spouse, stop it. God intends for your man to stand tall astride this globe, unashamed of his masculinity, treating you with honor and respect as he conducts a relentless campaign to win your heart and make you his wife. He expects your man to lead his household with integrity, serving as a mentor for children and a protector of financial and physical security. Anything you do to detract or distract him from this mission is detrimental to his identity as a man, your family, the community in which you live, and ultimately the nation itself.

This means no settling for less than is described above. If your fellah isn’t treating you with honor and respect, or isn’t leading his household with integrity, then you are contributing to the problem by continued involvement with a manpubescent. The silver lining is that he’s probably too pathetic to commit to anything longer than a commercial break, so it might just be a question of slotting him into the ex-boyfriend category and seeking more manly pastures. And to be honest, there’s no reason not to do so if he isn’t fulfilling his duty as a man. To think about this situation in economic terms, free market forces are not at work in your relationship because you are deliberately subsidizing a faulty product. If a deodorant gave you body odor, how long would you continue to purchase it? If a restaurant served you melted milkshakes every time you ordered, would you keep paying them for more melted milkshakes? Why would you stay in a relationship with a man-child who is content to shirk the responsibilities given him by God Almighty?  (This assumes that you’ve at least kept the bare minimum of God’s criteria and not allowed yourself to be unequally-yoked to an unbeliever.)

Men, it’s time to fish or cut bait. At the end of the day, regardless of what the women in your life encourage or tolerate, the responsibility for your masculine duty is yours alone. If any of the following statements apply to you, keep reading:

It is your duty to handle your household. This means you should run your household finances in order to manage and grow the resources you’ve been given. You are to commit to the development of the children in your home. This is especially important in today’s public school environment where school officials are actively seeking ways to undermine your authority. This also means that Sunday School should be seen as supplemental spiritual education, not the primary source. You should cherish and love your lady. Her well-being (physical/spiritual/moral) is more important than your hormones. A worthwhile woman would never be interested in “hooking up” with you and why would you want to waste your time and attention on a woman who isn’t worthwhile?

Simply put, our standards have slipped. We have allowed the criteria of what constitutes a man to atrophy nearly to the point of androgyny. There are many factors to blame, but primarily this is due to progressive ideology which seeks to erase all gender distinctions. It is up to both men and women to right the ship. As it stands currently, our kids are confused and their kids will be lost. We will not be allowed much longer the luxury of surprise when the boy-men we raise display feckless treachery instead of the honor and virtue we seek.