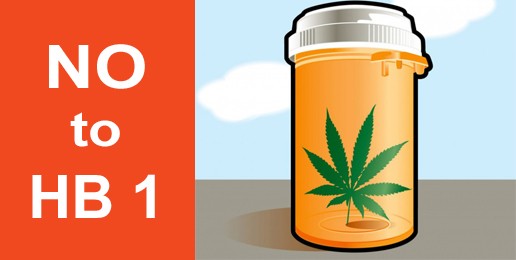 On Wednesday, May 8th, the bill to legalize marijuana as “medicine” was heard in the Senate Executive Committee.  The bill, sponsored by State Senator William Haine (D-Alton), passed by a vote of 10-5, and now advances to the full Senate for consideration.  It has already passed in the House.  (See how your state representative voted HERE.)

Legitimizing the use of marijuana for medical purposes will encourage and increase destructive behavior, especially among young people. Marijuana is the most widely used illicit drug in the United States. Research has found that adolescent and teen drug use rises as the perception of harm diminishes.

1. Its actual or relative potential for abuse

2. Scientific evidence of its pharmacological effects

3. The state of current scientific knowledge regarding the drug

4. Its history and current pattern of abuse

5. The scope, duration, and significance of abuse

6. What, if any, risk there is to public health

7 .Its psychic or physiological dependence liability

8. Whether the substance is an immediate precursor of a substance already under control

If marijuana is classified as medicine, marijuana use among youth will increase. Colorado has seen an explosion of adolescent and youth entering addiction facilities while California saw admissions for drug treatment more than double, according to the federal government’s first-of-its-kind report.

These potential harms were pointed out at a conference held at Moraine Valley Community College on April 15th to sort fact from fiction about how marijuana impacts health and safety, Illinois’ youth, drugged driving, the workplace while creating a law enforcement nightmare.

In the video below, Peter B. Besinger, former Drug Czar of the Drug Enforcement Administration (DEA) under Presidents Jimmy Carter and Ronald Reagan, warns against legalizing marijuana as medicine and the implications for everyone in the state if this legislation is approved.    For example, Bensinger pointed to Colorado as a state that legalized “pot” as medicine as an example of why the drug is dangerous.

Quoting the Colorado Department of Transportation, he said the number of motor vehicle fatalities in accidents where the driver had used marijuana has more than doubled from 23 in 2007 to 52 in 2011.  Besinger asserts that “marijuana has psychoactive ingredients that effect judgment, time, coordination and depth perception.”  Illinois’ HB 1 would allow a “medical” marijuana patient to operate a motor vehicle at their own discretion, even though research shows that a single marijuana joint with moderate levels of THC can impair a person’s ability to drive for more than 24 hours.

After watching the video, you will want to take action!  Please do so this week. The bill has already passed in the Illinois House.