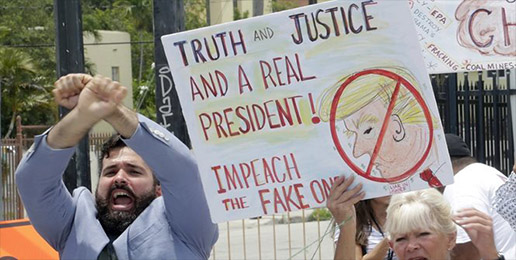 Looking at the current political and cultural climate in Washington, D.C., you might get the idea that the ruling class is in the midst of a conniption.  Even the walls of the National Cathedral are vibrating with weirdness – more about that later.

In “Summer of Our Discontent,” Washington Post staff writer Dan Zak lays out the mood gripping Washington, D.C., or, as the headline in last Tuesday’s Style section describes it, “the capital of the resistance.”  Here’s the third paragraph:

“Here we all are. The start of a mad hot American summer in the nation’s capital. A president violating norm after norm. Immigrant children wailing for their mothers. A Supreme Court seat, open like a wound. A midterm election hurtling toward us like an avenging angel, or a killer asteroid. The resistance girding for war, or curdling into hysteria, depending on your view.”

Let’s opt for hysteria.   This is the shark fin of a Deep State that is determined to bring down the Trump administration by whatever means necessary.

“It’s reached a point of desperation,” explains Amanda Werner, described by Mr. Zak as a campaign strategist. “We’ve been civil (did she say this with a straight face?) and having endless debates, and all we’ve seen is the decimation of everything we care about.”

Two weeks ago, Ms. Werner and a dozen others invaded a D.C. restaurant to heckle Homeland Security Secretary Kirstjen Nielsen and also came to her residence to scream, “We’re here to wake up your neighborhood.”  Last Sunday, the D.C. chapter of the Democratic Socialists of America chanted slogans outside the Alexandria home of just-retired Immigration and Customs Enforcement bureau Director Thomas Homan, accusing him of “fascism” (a socialist variant, but perhaps they don’t know that).  On June 22, the owner of the Red Hen restaurant in Lexington, Virginia kicked out White House Press Secretary Sarah Huckabee Sanders and then led a crowd to heckle her party at another eatery.

“I think now is the time to start seeking them out and invading their spaces,” Ms. Werner told the Post.

So, what are we in for now?

Anthony Oiveira has some ideas.  The University of Toronto instructor wrote a column for the Post on Friday titled, “Welcome to LGBTQ Wrath Month.”  Not enough fealty was paid to LGBTQ demands during Pride Month in June, so he calls for something stronger: “Stonewall. The White Night. Riots. ACT UP. Wrath Month is a chance to remember that before our symbol was a rainbow, it was a hurled brick. Civility be damned….”

And it will be, if Rep. Maxine Waters has her way.  The Democrat from Los Angles has called for more crowds to harass Mr. Trump’s cabinet.

Here’s the amazing part.   After her party’s congressional leaders, Nancy Pelosi and Chuck Schumer, declined to endorse Ms. Waters’s mob warfare scheme, nearly 200 “Black women” and other Progressives for whom Ms. Waters “is our shero [sic],” signed a letter demanding that the top Democrats apologize.

The signers were torqued that Ms. Pelosi and Mr. Schumer called the rent-a-mob tactics “unacceptable” and “not American,” and accused the Democratic leaders of — what else — racial insensitivity.  As a practical matter, this gives a free pass to Ms. Waters to say and do anything, no matter how offensive or bizarre.

Staring into the abyss of the upset election on June 26 in New York in which a socialist Millennial unseated Democratic House Caucus Chair Joe Crowley, a 10-term congressman, Pelosi promptly issued a statement blaming President Trump for the attacks on his staff and hailing Waters as a “valued leader.”

Moving on to the world of religion, the Post reports that the Episcopal Church USA has begun debating how to further edit the once-incomparable Book of Common Prayer that they “improved” in 1979.

Ms. Kelly Brown Douglas, the canon theologian at the Washington National Cathedral, wants to cleanse the book of masculine references.  Instead of “Lord,” which implies maleness, she wants to use “Creator, Liberator, Sustainer.”

Another theologian on the language committee, Brite Divinity School Professor Wil Gafney, says she already routinely ditches “King” for “Ruler” or “Creator” and sometimes uses “she” to refer to God.

Others propose language about conserving the Earth, blessing a transgender person’s adoption of a new name and performing a same-sex “wedding.” So far, no one reportedly has offered up a prayer to bless having an abortion.  But wait for it.

Ms. Gafney did draw the line at altering Jesus’s opening to the Lord’s Prayer, which he gave his apostles in Matthew 6: 9.

“’Our Father,’ I won’t fiddle with that,” she told the Post.

What refreshing humility.   If only the rest of the Resistance could learn to be so humble.

This article originally posted at Townhall.com