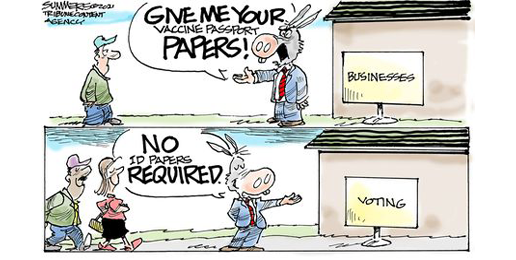 As Leftists unravel and incinerate the fabric of America, it’s helpful—unpleasant but helpful—to recall some of their now legendary acts of hypocrisy and deceit, including the widespread use of Newspeak. So, let’s start with that.

While claiming to have a corner on compassion and love, Leftists now refer to human beings by the soulless, utilitarian term “human infrastructure”—something to be used, manipulated, repaired, or destroyed and rebuilt in ways that better serve the omniscient and omnipotent among us. I guess we should count ourselves lucky that they are including the word “human’’—for now.

Leftists cheer for the acts alleged by Bob Woodward and Robert Costas in their book Peril to have been committed by General Mark Milley—acts that if true would be seditious and/or treasonous. Meanwhile, Democrats spent millions of taxpayer dollars to “investigate” alleged collusion with Russians by former President Trump even after they knew the story was false.

Leftists want hard-working Americans to pay for the food, housing, education, job-training, and medical expenses of 95,000 Afghan refugees. Meanwhile, the U.S. homeless population is over 580,000, of which 171,000 are in families and 37,000 are military veterans.

Leftists said nothing when Kamala Harris proclaimed she would not get the vaccine if Trump said to get one, but they are howling indignantly because rapper Nicki Minaj suggested people should do their own research before getting a COVID-19 vaccination.

Leftists want to force Americans to be vaccinated or regularly tested for COVID-19, and the Biden administration is requiring all foreign nationals who come to the U.S. legally to provide proof of vaccination and a negative COVID-19 test within three days of leaving their country for the U.S. Meanwhile, the Biden administration has been allowing thousands of illegal immigrants to flood the country without proof of vaccination or a negative COVID-19 test.

Leftists support the lawlessness of border criminals who flagrantly violate our immigration laws, and at the same time, they object to the efforts of ICE, the U.S. Border Patrol, and police to enforce laws that protect citizens.

Leftists shrieked about “kids in cages”—cages that the Obama administration built—and said nothing about plastic pods with children of color packed in like sardines.

Leftists claim to love multiculturalism and hate the imposition of “white” ideas on other cultures, but then they spend buckets of taxpayer ducats to impose controversial leftist sexuality dogma that was socially constructed by privileged whites in off-white towers on Middle Eastern and African cultures.

Leftists claim to be the party that cares about women, but then they sexually integrate women’s locker rooms, restrooms, shelters, prisons, and sports, and they support the slaughter of approximately 430,000 girls in the womb.

Leftists claim to value diversity, tolerance, free speech, and critical thinking and then silence ideas they hate from being studied and discussed in publicly subsidized schools.

Leftists claim to care about persons of color and yet steadfastly deny them the right to choose where their children are educated.

Leftists claim to care about persons of color but continually pass policies and laws that incentivize the destruction of the nuclear family which has resulted in a plague of criminal activity, dysfunctional schools, dangerous neighborhoods, and government dependence among those communities where many persons of color live.

When pressed a few leftists muttered an anemic tut tut about the 630 violent insurrections by BLM and Antifa that caused over a billion dollars of damage to private property, resulted in 2,000 police injuries, and included the destruction of government property, and yet all leftists fake-fume endlessly about the Jan. 6 riot.

Leftists paid to have criminals who were arrested in the 2020 BLM/Antifa insurrections sprung from jail and yet say nothing when those arrested for participating in the Jan. 6 riot languish in jail for months on end.

Leftists pontificate on the importance of “transparency” while saying nothing when cellar-dweller Biden stayed barricaded in his fortress rather than campaigning and saying nothing when the few press conferences he holds are micro-crafted with precision to conceal his cognitive decline.

In 2006, just before she became the first female U.S. Speaker of the House of liars, Nancy Pelosi  said,

We’ll turn the most closed and corrupt Congress into the most open and honest Congress. … The only way you can make the change that needs to be made for our country—a new direction where we’re there for the many and not the few—is to drain the swamp.

Pelosi meant none of it.

Throughout Trump’s tenure, America learned just how thick, deep, and fetid the swamp has become. The sewage has leached out into all power centers: all departments of the vast governmental bureaucracy, legacy news media, social media behemoths, academia, and corporate America.

This is no longer America.

To borrow the title of Rod Dreher’s book: Live not by lies.