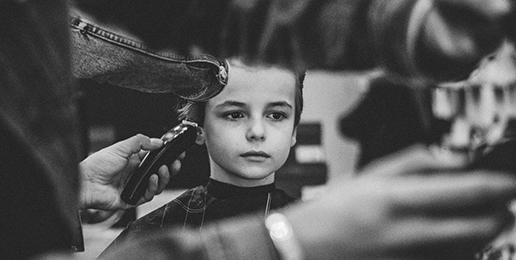 Grooming the Next Generation: Did Gillette Miss a Spot?
01.21.19
PRINT

The American Psychological Association recently contributed its thoughts on traditional masculinity, telling us that it’s mainly a semi-harmful social construct. This week, Gillette has added its two cents on “toxic” masculinity in a now-viral advertisement. The main point: men must hold other men accountable “in ways big and small,” especially as it pertains to sexual harassment and bullying. This is important because, apart from the incentive of selling shaving products, the boys watching today will be the men of tomorrow.

Backlash has ensued. The commercial has almost half a million likes with twice as many dislikes. Many decry the characterization that men today are sexual harassers who sit around at barbecues and let kids beat each other up, mumbling between beers that “boys will be boys.” The commercial, some say, promotes a view that all men are rapists and bullies.

Others heard it as yet another call to be less rugged, more domesticated, more conceding to the feminism of our time. Another attempt to paint us as unstable in order to take away sharp objects. The virtue that men and women have equal value has devolved into the vice that pretends men and women are the same.

But many embrace the message because it calls out a strain of men that do exist in our society — brutes who use their strength and power toward corrupt ends. Whether that end entails touching a female inappropriately or harassing someone smaller, God’s people — like God himself — will confront such violence and abuse.

Narrowly speaking, the message that seeks to protect our women and children deserves our hearty amen, regardless of whether Balaam speaks it. We too stand firmly, unequivocally against that imposter called brutality. But this is one perversion today that is profitable to stand publicly against. Another distortion, less financially beneficial, has slipped quietly under the radar.

This less-popular strain of toxic masculinity was documented a decade ago by Dockers in its Man-ifesto campaign. Its commercial, worth quoting in full, reads as follows:

Once upon a time, men wore the pants, and wore them well. Women rarely had to open doors, and little old ladies never crossed the street alone. Men took charge because that’s what they did. But somewhere along the way, the world decided it no longer needed men. Disco by disco, latte by foamy nonfat latte, men were stripped of their khakis and left stranded on the road between boyhood and androgyny.

But today, there are questions our genderless society has no answers for. The world sits idly by, and cities crumble, children misbehave, and those little old ladies remain on one side of the street. For the first time since bad guys, we need heroes. We need grown-ups. We need men to put down the plastic fork, step away from the salad bar, and untie the world from the tracks of complacency. It’s time to get your hands dirty. It’s time to answer the call of manhood. It’s time to wear the pants.

The pants company rightly observes that cities crumble without men living as men. We need heroes that do not beat up those they swore to protect, and heroes who are willing to take off their superman pajamas, put down their frothy drinks, and act more like Clark Kent — the very thing our sexless society is trying to make harder than ever.

Too often we swing from decrying chauvinism and abuse to producing a society of plastic forks, nonfat lattes, and men who don’t mind going to church because of the free babysitting. When our children look at men today — the kind in television shows, homes, and the classroom — what do they see? What is this masculinity of tomorrow we are all concerned with?

Just having returned from a visit to “the greatest place on earth,” my wife and I were shocked at how many men boldly acted like women. Lispy sentences, light gestures, soft mannerisms, and flamboyant jokes were everywhere to be seen — on display for a park flooded with children. No hiding it. No shame. No apologizing. This perversion of masculinity warranted no commercials.

Instead, our society celebrates what Paul calls literally “soft men” (Greek malakoi), a group that will not enter the kingdom of God (1 Corinthians 6:9). And discomfort at this will-not-inherit-the-kingdom version of manliness is exactly a symptom of what the APA finds malignant in traditional manhood. But as much as the APA and LGBTQs protest it as hate speech, the effeminate shall not enter the kingdom of God, and it is unloving not to say so.

While men who brutalize and manipulate represent one form of perversion (the kind companies now put their dollars into supporting), men who sit passive, complacent, spiritually and emotionally frail, represent another. So also do men who rebel against their sex by acting like women. And too many classrooms that celebrate this perversion act as accomplices to confusing the boys (and girls) of today. Paul commands all men, “Be watchful, stand firm in the faith, act like men, be strong” (1 Corinthians 16:13), and offers them the hope of the gospel that they too might be washed, sanctified, and justified “in the name of the Lord Jesus Christ and by the Spirit of our God” (1 Corinthians 6:11).

David Mathis rightly tells us that the strongest men are gentle. But do not hear him saying that godly men are soft, fragile, weak, or effeminate. They do not faint in the day of adversity. They dress for war every day against forces of evil. They are sacrificial initiators, not limp deferrers. Men who charge against enemy gates, leading from the front, and refusing to take cover behind their wives and children. They lead. They protect. They initiate. They love. They sacrifice. They work. They worship. They are men.

Godly men are neither severe nor effeminate. They have a sword, but use it against the dragon, not the princess in the castle. They are safe to those God calls them to protect, dangerous to the flesh and the kingdom of darkness. They have more to do than restrain themselves; they live for the glory of God. They mount their horse, gird up their loins, and “ride out victoriously for the cause of truth and meekness and righteousness” (Psalm 45:4). And their General, instead of handing them plastic forks, “trains their hands for war, so that their arms can bend a bow of bronze” (2 Samuel 22:35).

They are like Moses, not Pharaoh. They do not lord their power in hopes of cowardly self-preservation. They stand against an empire with the Lord over all empires, calling for tyrants to heed the God of heaven and earth. They are assertive and yet comprise the meekest men on the planet. They make unpopular decisions, meet regularly with their God, and constantly insist, “Thus saith the Lord.”

They are like David, not Saul. They do not hide when duty calls. They gladly go into battle, when others will not, in the venture of their God’s fame. They kill tens of thousands of sins, and fight the more fearful enemy than Goliath. They dress in armor too big for them: God’s (Ephesians 6:13). They know much warfare and yet can testify that God’s gentleness makes them great (2 Samuel 22:36). Battle-tested, yet they may give themselves to things such as poetry. And should they ever shirk their duty and do wickedly, they repent before God and trust in his mercy and steadfast love to restore them.

The Best a Man Can Get

Such men are like Jesus, not the world’s soft-serve substitute. The smiley, flowy-haired, manicured Jesus is an idol. The Jesus of the Bible is the King of kings and the Lord of lords, who will return with a sword in his mouth and heaven’s army in his wake. He is the thrice holy man of war, the great redeemer, the sinner’s friend, who calls all to repentance, faith, and obedience. Vengeance is his; he will repay.

And yet, he also calls children to himself. He washes disciples’ feet. He speaks gracious words to the oppressed, champions the widow’s cause, and calls the contrite near. A bruised reed he does not break, and a faintly burning wick he does not snuff. Tough, yet tender.

Satan hates such biblical masculinity. He pressures men like never before to apologize for being what God has made him. He hands him androgyny, effeminacy, passivity, and pornography. He calls it a social construct and sends the Delilah of feminism to strip him of his passion, ambition, and strength, laughing as men ache while watching Braveheart. But while he hates that God made them both male and female (Genesis 1:27), we can show the world the best a man can get: gentleness and strength, holy compassion and holy aggression. In a word, Christ.

This article was initially published on DesiringGod.org