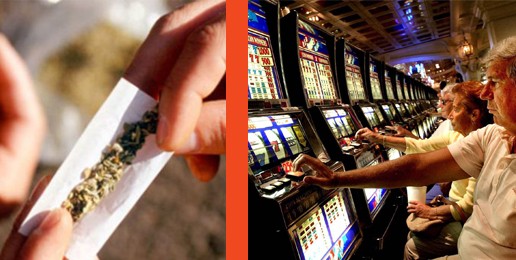 In most political commentary, libertarians and liberal advocates of an expanded role for government are considered to be on the opposite sides of the political spectrum. Libertarians oppose increased government revenues as an assault on personal freedom, while the people they deride as “big government” supporters argue that these revenues are needed if government is going to perform its proper role.

As it turns out, the reality is not nearly as clear as the theory. There are times when their interests coincide to the detriment of many.

This was the subject of a recent Washington Post op-ed by one-time Chuck Colson colleague and former White House speechwriter Michael Gerson. According to Gerson, both “the growth of payday gambling and the legalization of marijuana” are “justified as the expansion of personal liberty,” and at the same time “they serve the interests of an expanding government.”

The latter is, or should be, obvious: legalizing various forms of gambling allows states to raise revenues “without the political inconvenience of requesting broad tax increases.” For instance, Maryland voters legalized video slot machines in 2008 and approved the addition of a casino just outside Washington, DC in 2012.

As Gerson pointed out, Maryland’s motives had nothing to do with “personal autonomy.” Its motives were the 61 percent tax it collects on video slot machine revenue.

The same is true of every other state with legalized gambling. State-sponsored gambling allows elected officials to provide voters with government services without asking voters to pay for the services if they don’t want to. Instead, they can stick other people, often those who can least afford it, with the tab: between 40 and 60 percent of all video slot revenue comes from problem gamblers. And, as if to reinforce the whole “free lunch” idea, “casinos are often sited to attract working-class” customers.

And as Gerson tells us, history seems poised to repeat itself. My state of Colorado is expected to collect $114 million in its first year of marijuana legalization. Other states are watching, and it’s safe to say that many will follow the money trail. The political logic that drives the spread of legalized gambling also drives legalized drug use.

Of course, no elected official will acknowledge the cynical political calculation at work here. Instead, the preferred rhetoric is that of personal freedom. Thus, as Gerson writes, “libertarians are now, paradoxically, providing ideological cover for irresponsible government.”

Missing in all of this is any consideration of the impact of government’s trafficking in human weakness. Just as there is ample evidence of the damage that problem gambling causes to individuals, families, and communities, there are reasons to be concerned about the impact of legalized marijuana, especially on children.

But all of this takes a back seat to government’s need for revenue and the libertarian desire to maximize personal freedom. As Gerson writes, “the idea of a political community upholding standards, in order to help other institutions (such as families) pass healthy cultural norms between generations, is anathema.”

As Chuck Colson pointed out on this program 15 years ago, it’s as if government were deliberately setting about “to increase crime, divorce, suicide, child abuse, bankruptcy, and domestic violence.”

Come to BreakPoint.org and click on this commentary. We’ll link you Mike Gerson’s excellent editorial. We’ll also link you to Focus on the Family’s resources on the scourge of gambling—as well as the Family Research Council’s work on marijuana.

As Gerson says, “politicians increasingly benefit when citizens are addicted, exploited, impoverished and stoned.” And, the oddest of political bedfellows—libertarians and the advocates of big government—are calling it the “advance of freedom.” Gerson is correct when he says that a better word is “contemptible.”

This important article was originally posted at the BreakPoint.org website.