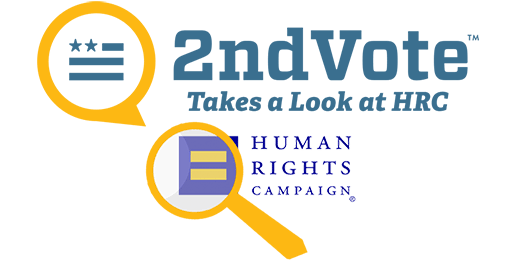 By now, conservatives should be very familiar with an influential organization that has carried the banner for same-sex marriage advocacy, the Human Rights Campaign. However, many may be unaware of the powerful network of corporations that are involved with HRC’s longstanding push to overturn marriage laws in America.

Just a few years back, HRC organized the Business Coalition for DOMA Repeal as a series of cases, such as Windsor, challenging the federal Defense of Marriage Act were heading to the Supreme Court. Fast-forward to 2015 and we see a growing number of corporations advocating for ultimate overhaul of state marriage laws in Obergefell.
In March of this year, 379 business entities signed an amicus brief urging the Court to rule against traditional marriage laws. Not surprisingly, many of the companies signing the brief are listed as corporate supporters of HRC. Just a few examples of these include American Airlines, Bank of America, Coca-Cola, Pepsi and Starbucks.
Other signers that are also confirmed sponsors of the annual HRC National Dinner include Marriott, Microsoft and Wells Fargo.

2nd Vote has compiled a resource page that list the companies involved with HRC, as well as the companies advocating against traditional marriage laws. This page also includes a list of all the signers of the amicus brief and links to the language contained in the brief.

In dissent of Windsor, Justice Antonin Scalia appears to have been eerily prescient in his criticism of the majority’s ruling when he wrote: By formally declaring anyone opposed to same-sex marriage an enemy of human decency, the majority arms well every challenger to a state law restricting marriage to its traditional definition. Indeed, the ruling in Windsor gave groups like HRC a valuable rhetorical tool to enlist the support of major corporations to fund their agenda.

However, that agenda that we actually fund by doing business with many of these companies goes against our values on several levels. Recently, we have seen major corporations in Indiana eagerly joining the campaign to spread disinformation on laws protecting religious liberty. Perhaps just as concerning, we see the business alliance with HRC pushing for judicial activism that could threaten the very tenets of the legislative process and federalism.

Conservatives should inform themselves on the potential ramifications of Obergefell and hold these companies accountable for their advocacy that benefits their own self-interest, which the evidence shows is not constitutionalism, nor is it the defense of our most sacred social unit.

Chris Walker is the Executive Director of 2nd Vote, a conservative shopper app. To find out more, download the free app or visit 2ndVote.com. Originally posted at Redstate.com.

Praying for Our Enemies

Planned Parenthood Losing Some Big Donors
b
a
x
r