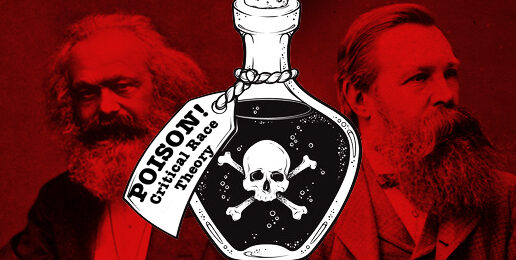 I’m half white and half black. My melanin doesn’t change my worth or my propensity to sin. Yet we live in a culture where we are told that our skin color confers upon us a status that is fixed, assigned by an elite class of humans who call themselves “scholars.” They want us to see everything through the broken lens of “race”—a human construct that has only served to dehumanize us throughout history. As a person with brown skin, I reject my assigned “status” and refuse to see everything through that distorted prism.

It leads to blindness.

Instead, I choose to see through the breakthrough filter of Scripture that opens our eyes to the truth of our identity, the perfect bond of love, our oneness through Christ, and the freedom of forgiveness. Our human condition, and the frailty that marks us, can never be illuminated by the darkness of tattered theories.

And that’s exactly what Critical Race Theory (CRT) is.

How can a theory derived from anti-Semites who were virulent racists hell-bent on abolishing the family and religion bring healing to the sin of racism? Karl Marx and Friedrich Engels saw Christianity as an impediment to their socialist ideology. How can a godless theory be used as an “analytical tool” to address issues needing a Godly solution?

I’m particularly irked by Christians who don’t want the struggle of wrestling with solutions but simply hop aboard the latest bandwagon sponsored by an insanely profitable victimhood industry. Racism is evil as is every other sin known to humankind. Sin diminishes and destroys us. It is a brokenness that cannot be remedied by more brokenness. But for many, the goal is not to offer a solution but a continual subscription.

Famed educator and leader Booker T. Washington, a former slave, explained this industry well on page 144 of his book “My Larger Education”:

“There is another class of coloured people who make a business of keeping the troubles, the wrongs, and the hardships of the Negro race before the public. Having learned that they are able to make a living out of their troubles, they have grown into the settled habit of advertising their wrongs — partly because they want sympathy and partly because it pays. Some of these people do not want the Negro to lose his grievances, because they do not want to lose their jobs.”

Today, that class of people is of varying hues and NY Times bestsellers capitalize on a form of activism that seeks to divide us, erase equality, and offer forced redistribution in the form of “equity”. Dr. Carol Swain, the brilliant former (black) professor of political science and law at Vanderbilt University, offers a helpful definition of Critical Race Theory:

“Critical race theory is an analytical framework to analyze institutions and culture. Its purpose is to divide the world into white oppressors and non-white victims. Instead of traditional forms of knowledge, it holds up personal narratives of marginalized minority “victim” groups (blacks, Hispanics, Asians) as evidence (considered irrefutably by its nature) of the dishonesty of their mostly white heterosexual oppressors.”

As someone who is “biracial,” I’m both the “oppressed” and the “oppressor.” Through no fault of my own, since no one controls the circumstances of his or her conception, I’m foisted into perpetual perplexity simply based on the sins or the sufferings of my lineage. Just to further illustrate the absurdity of this deeply prejudiced CRT approach to classification, I can simply highlight my own origin story. I was conceived in rape. So, am I responsible for my (black) biological father’s heinous act? Of course not. Interestingly, my white father—who chose to adopt and love ten children (of varying beautiful hues) that other men abandoned—is branded as part of the “white supremacist patriarchy” that is guilty of every negative outcome of black Americans. My dad, Henry Bomberger, recently passed away. The only legacy he left behind was one of unconditional love and self-sacrifice. His devotion to us proved that it’s not color that binds us; it’s love.

Despite Scripture’s insistence on the unity of believers and how Christ makes us one (Galatians 3:28), CRT diabolically separates us using the deeply flawed human construct of race. Ironically, in a culture that rejects the science of binary gender the progressive priests of CRT demand we can only be the “oppressed” or the “oppressors”. How nihilistic. It also preaches perpetual “guilt” and undeserved “privilege” based solely on one’s skin color.

The Bible tells us to no longer conform to the pattern of this world in Romans 12:2, yet this is exactly what we do when we embrace the warped worldliness of CRT. Blame, Deceive, Repeat. This destructive pattern is recognizable throughout Scripture. Satan is the accuser, and he constantly coaxes us to embrace the lie instead of the Light.

CRT is a debilitating disease. Its malignancy in the body of Christ is spread by pastors who don’t believe the Word is enough. Some of these leaders apparently think the World has the answers to the temporal and eternal devastation of sin.

Mainstream media gave voice to a handful of black pastors who support using CRT and several who left a major denomination over it. Pastor Charlie Dates, of the Progressive Baptist Church in Chicago, exited the Southern Baptist Convention over SBC Seminary presidents’ rejection of Critical Race Theory, despite their clear denouncements of the sin of racism. I thoroughly agree with their statement. I’m not a Southern Baptist, so I have no interest in defending a denomination but merely want to uphold the Truth. Pastor Dates, who embraces unbiblical Black Liberation Theology and the Black Lives Matter movement, issued a defiant (and historically challenged) OpEd sharply condemning those who oppose CRT. He claims the rejection of CRT is due to “fear of liberalism.” I don’t fear liberalism. I wholeheartedly disagree with it because of its dependence on deception and division. Dates strangely then attributed certain social movements to “liberalism” (aka the Democrat Party) such as abolition, women’s suffrage, and civil rights. On all three, Republicans led the fight. But CRT and its advocates value feelings far more than facts.

I don’t think there’s any more eloquent a pastor speaking about cultural issues and Biblical authority than Pastor Voddie Baucham. As a black adoptive father, he embodies what many Christians should aspire toward—Godly character and critical thinking. He exposes and denounces CRT—not with emotionalism (like Pastor Charlie Dates) but with factualism.

Dr. Kimberlé Crenshaw, credited as a co-founder of “Critical Race Theory” (of course, derived from Marxist Critical Theory) is a leading proponent of this poison. Never mind this accomplished black woman was the recipient of Ivy League education at Cornell and Harvard Law School. But, you know, systemic racism. She sees it in everything…well except the abortion industry which massively and disproportionately kills black lives. Crenshaw, who is radically pro-abortion, pro-LGBT, anti-nuclear family and denies the clearly evident consequences of fatherlessness, blames racism for everything that victimizes black people and other “marginalized” groups. Her organization, the African American Policy Council, is holding an event on April 29th featuring Crenshaw, Brad Sears (Executive Director of UCLA’s dubious and radically pro-LGBT The Williams Institute) and Planned Parenthood’s President, Alexis McGill Johnson, as keynote speakers.

But sure, let’s use Critical Race Theory—an ideology that is hostile to Christianity in countless ways—as a means by which Christians should see the world. CRT activists claim to fight for justice but regularly reject truth and morality. Psalm 89:14 says: “Righteousness and justice are the foundation of Your throne. Mercy and truth go before Your face.” You cannot have justice without mercy (the compassion or forgiveness toward an offender) and truth. To ignore this is to welcome a cancer instead of the cure.

This article was originally published at TheRadianceFoundation.org.

Join us in Collinsville on Saturday, May 22nd for an IFI Worldview Conference about CRT!