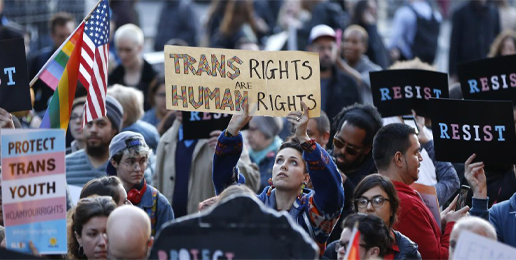 The culture of America 2017 seems to be, in the words of stalwart conservative thinker and jurist, Robert Bork, Slouching Towards Gomorrah.

Our society has become a living metaphor of Israel, circa 200 B.C.:

In those days there was no king in Israel: every man did that which was right in his own eyes. Judges 21:25

And our culture is a vivid picture of Romans 1:

21 Because that, when they knew God, they glorified him not as God, neither were thankful; but became vain in their imaginations, and their foolish heart was darkened.

22 Professing themselves to be wise, they became fools,

23 And changed the glory of the uncorruptible God into an image made like to corruptible man, and to birds, and fourfooted beasts, and creeping things.

24 Wherefore God also gave them up to uncleanness through the lusts of their own hearts, to dishonour their own bodies between themselves:

25 Who changed the truth of God into a lie, and worshipped and served the creature more than the Creator, who is blessed for ever. Amen.

26 For this cause God gave them up unto vile affections: for even their women did change the natural use into that which is against nature:

27 And likewise also the men, leaving the natural use of the woman, burned in their lust one toward another; men with men working that which is unseemly, and receiving in themselves that recompence of their error which was meet.

28 And even as they did not like to retain God in their knowledge, God gave them over to a reprobate mind, to do those things which are not convenient;

32 Who knowing the judgment of God, that they which commit such things are worthy of death, not only do the same, but have pleasure in them that do them.

Paul’s letter to the Romans, with a little 21st century language revision, could have been sent to Americans at large.

That’s the ugly news for America and American culture.

But America has also been blessed beyond measure since her inception. Indeed, countless stories speak to God’s intervention even during the Revolutionary War. The U.S. has been a friend to Israel and had an abundance of believers reaching the nation and the world with the Good News of the Gospel, such that we enjoyed providential protection and blessing.

Now, in what many believe to be, barring revival and return to God’s precepts, the sunset of our nation, a new American Culture & Faith Institute survey delivers a mixed bag of good and bad news:

There is good news and bad news for conservatives.

The good news is that conservatives are more likely than liberals to believe there is a culture war underway. The even better news for the Right is that SAGE Cons are the single most attentive and active group when it comes to engaging in that culture war.

Mainstream Media (MSM) is loathe to cover the truth that Conservatives are much more charitable than Liberals. Jeff Jacoby writes at the Boston Globe in his article, “Stingy Liberals“:

Liberals, popular stereotypes notwithstanding, are not more generous and compassionate than conservatives. To an outsider it might seem plausible that Americans whose political rhetoric emphasizes “fairness” and “social justice” would be more charitably inclined than those who stress economic liberty and individual autonomy. But reams of evidence contradict that presumption, as Syracuse University professor Arthur Brooks demonstrated in his landmark 2006 book, “Who Really Cares.”

Progressives stroke out when confronted with the evidence that Conservatives, and in particular people of faith, give more, much more, to charity and non-profits than do Leftists and the non-religious

For years, academic research and national studies have confirmed that Americans who lean to the left politically tend to be much less charitable than those who tilt rightward.

That’s the good news for America and American culture.

But Conservatives must confront the reality found in that opening paragraph by the American Culture and Faith Institute:

That’s the bad news for America and American culture.

And why are Conservatives less likely to engage in the culture war, except by giving to churches and organizations that fight in their stead?

Conservatives believe the basic foundation of our society is the nuclear family — one man and one woman in an exclusive, life-long relationship, rearing children (God willing) and inculcating in them their godly precepts and values.

Thus, Conservatives work diligently to support their families, to raise their children, to be independent and not a burden on society. It’s completely understandable that the bulwark of Conservatives’ energy is expended toward those ends.

And Conservative Christians live the biblical exhortation to give back that which rightfully belongs to God, “the first fruits of their labor”:

Honor the Lord with your wealth, with the firstfruits of all your crops. Genesis 18:23

A snapshot of “flyover” Americans who espouse a biblical and conservative worldview will show those folks working hard, raising kids, reading their Bibles, paying taxes, tithing, and being good neighbors. Politics and the culture war have taken a back seat by necessity.

But now The Left, Progressives, whose “religion” is government and social activism, with their unrelenting pursuit of radical, social transformation, have pushed our once mostly godly nation to the brink of destruction. Conservatives must awaken and understand it’s past time to “armor up” and engage the culture.

Like the patriarch Abraham who pleaded for Sodom and Gomorrah:

Even so we must plead with God and we must act.

Followers of Jesus were instructed in Matthew:

“You are the salt of the earth. But if the salt loses its saltiness, how can it be made salty again? It is no longer good for anything, except to be thrown out and trampled underfoot.

“You are the light of the world. A town built on a hill cannot be hidden. Neither do people light a lamp and put it under a bowl. Instead they put it on its stand, and it gives light to everyone in the house. In the same way, let your light shine before others, that they may see your good deeds and glorify your Father in heaven. Matthew 5:13-16

What do Americans, according to the Faith and Culture survey believe? And how does that translate to action?

Seven out of ten Americans (71%) believe there is a culture war taking place in the United States today.

When ten forms of social action were gauged by the national survey, additional patterns emerged, showcasing the heightened commitment to cultural transformation of two competing groups, in particular: SAGE Cons and liberals. Conservatives, in general, were typically no more engaged in transformational activities than were moderates.

We must, especially as Christian Conservatives, live out our lives as the salt and light God intended. And that means rolling up our sleeves, venturing out of our comfort zones, and engaging a culture in dire need of God’s precepts and God’s people.

It’s high time we allowed the Bad and the Ugly News about America to be a CATALYST for propagating the GOOD NEWS which will heal and preserve and elicit, once again, God’s protection and blessing.

Tami Jackson
Tami Jackson is a life-long Conservative embedded in her once red, native state of Oregon, the granddaughter of (legal) Norwegian immigrants, and the former Executive Editor at BarbWire.com. Tami is an Evangelical Christian and Second Amendment aficionado. She is also Social Media/Content/Marketing for Robar Companies, and the host of The Tami Jackson Show.
Twitter:  @tamij  ...
Full bio and more from Tami Jackson
b
a
x
r