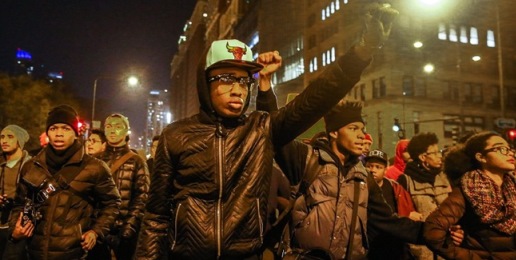 Recently, ABC 7 Eyewitness News anchor Terrell Brown interviewed Shari Runner, the president and CEO of the Chicago Urban League on the problems of black-on-black violence and the Black Lives Matter movement. Her predictable responses sound like she just returned from a White Privilege Conference and illuminate why “progressives” exacerbate rather than ameliorate inner city violence.

Brown: “Gun violence is still a big problem in the city, and it’s often gang-on-gang and it’s black- on-black crime….What do you do to stop it?”

Runner: “Well, I think the root cause is…jobs for kids who are disengaged. We have 46,000 disengaged youth in our city. That means that they are out of school and out of work, and they need jobs. And they really want to be in legal jobs. And they want to be able to be trained to do those jobs rather than be involved in gangs. So, that’s really a big focus of ours for the next ten years, to make sure that happens.

“College is an option for many, not for all. Certificates are good. There are a lot of opportunities in the city that just are not being taken advantage of because people cannot get access to them.”

Brown: “Let’s talk about the Black Lives Matter (BLM) movement. There’s a lot of debate right now about the genesis of the movement, what it represents, where it’s going. Often when someone says, ‘Black lives matter,’ the response is, ‘Well, you know what? All lives matter.’ What’s your take on that?”

Runner: “I think the thing is that ‘black lives matter’ is a cry about the fact that institutional, systemic racism still exists in our society. And when you look at the evolution of [BLM] coming from the police violence and the shooting of young black men, unarmed men and boys, 12-year-olds who are confused as 30-year-old men, and the kind of narrative and stereotyping that goes into those kinds of decisions, it is a real cry about the racism that still is very endemic in our society.”

What was most stunning in her troubling comments was her assertion that the absence of jobs for teens is the “root cause” of gang-on-gang and black-on-black violence. The dearth of jobs for teens cannot possibly be the “root cause” of gang-on-gang or black-on-black violence. By the time young males in urban areas who join gangs or engage in violence reach the age at which they are able to work, the root causes have been operative in their lives for a decade.

The root cause of violence perpetrated by black men against the black community and others is family turmoil, including the absence of fathers or the presence of poor fathers. In a 2013 research paper titled “Why American boys join street gangs” about Mexican and black boys who had joined street gangs, author Stanley S. Taylor writes that “Each gang affiliated subject…expressed deep-seated frustrations in early childhood (prior to 10 years old). In addition, each gang member (and the reformed members interviewed) attributed their feelings directly to unstable home lives.”

A poor economic climate may be one of the contributive factors to family instability, which points to the importance of creating an economy able to sustain families. But it is not a dearth of jobs for teens that makes them vulnerable to gang membership, which in turn results in black-on-black crime.

Taylor identifies the factors that contribute to gang membership, the top two of which are “frustration and anxiety stemming from family problems such as fatherlessness,” and “sadness, frustration, and anxiety in home life.” To illustrate this tragic reality, Taylor shares the story of how 32-year-old “Joseph” became a member of the Crips, a black Los Angeles gang:

Joseph…described what his life was like as a 7 year old. He mentioned that he and his younger brother who was 6 years old had their father in the home. However, at around the time he turned seven years old his father moved in with a woman on the same city block and had children with her, while he and his brother were left to live with their mother. Joseph explained how this devastated him and that… abandonment was on his mind constantly….

Joseph mentioned his father never visited with them nor allowed he and his brother to come to the father‘s residence. Joseph spoke of several instances where his father would not stop to talk to he and his brother when the father drove by. He mentioned the few times that his father did stop and speak to them as they played outside, that he made promises to visit them or take them for car rides with him that he never kept. He stated that their father stopped once and gave them both one dollar and left. Joseph stated that he would see his father taking Christmas presents out of the car for his other children while they received nothing for Christmas. Joseph said that it hurt him very badly. He mentioned that as he got older the inner pain was with him every day and that he and his brother were unsupervised by their mother because she worked late.

He had begun to associate with boys in the neighborhood that were in gangs and participated in delinquent activities such as defacing property, bullying non gang members, and missing classes at school to spend time with the local gang members. By the time Joseph was 12 he had joined the Crip gang….

Joseph described how a 31-year old veteran gang member began taking him to parties where he met older girls, smoked marijuana, and drank alcohol. He said that it made him feel like he was “on top of the world.” He gained a reputation in the neighborhood as being “gangsta” because he was accepted by the gang and could therefore “hang out” with various members. Many of them sold drugs and had money and cars. Joseph stated they did many things to make him feel like part of the family so he joined the gang.

Camaraderie was developed by doing delinquent acts, drinking together and just hanging out. But as time went on, he said that he was expected to commit delinquent acts from vandalism and fighting rival gang members, to drive-by shooting.

It would take tortured reasoning to identify the “root cause” of Joseph’s problems as a dearth of jobs for teens. Gang members are telling us that they join gangs—not because they couldn’t find “legal jobs” as teens—but because they found no peace, security, and stability in their families during childhood. Why isn’t society listening to them?

The factors that contribute to gang membership, gang-on-gang violence, and black-on-black violence are numerous and tied up in a tightly woven Gordian knot. Certainly, a weak economy in which both parents must work or in which parents cannot find work contributes to family tension and breakdown, but there are other issues at play as well.

When divorce is hailed as a solution that is “best for the children,” when “progressives” normalize motherless and fatherless family structures (e.g., same-sex faux-marriage), when Hollywood normalizes and glamorizes non-marital sex, when having and raising children is viewed as a “right” to which single men and women and homosexuals are entitled, when children are objectified and commodified, and when purported Christians—including Christian leaders—turn a blind eye to or even affirm the unbiblical sexual and marital views and values of “progressivism,” family instability increases and children suffer.

If progressives truly cared about the violence destroying our black urban communities, they would be willing to sacrifice their deleterious sexual views and values for the good of black children. The Chicago Urban League and Black Lives Matter would turn their focus, energy, and money away from finding “legal jobs” for hurting teens to ensuring that all children grow up with mothers and fathers, preferably their own biological mothers and fathers. Of course that goal has been made even more politically challenging now that our president has endorsed legalized homoerotic pseudogamy—a family structure that necessarily deprives children of mothers or fathers.