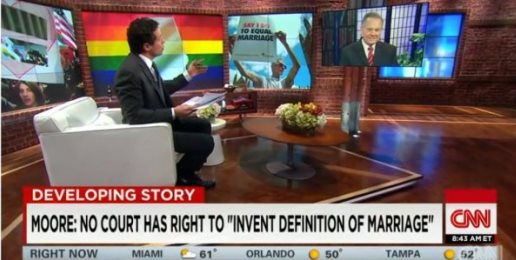 An author and philosopher says CNN host Chris Cuomo needs a remedial lesson in American history after suggesting that America’s laws come from man, not from a Creator.

Cuomo made the comment February 12 during a testy interview with Roy Moore, the Alabama Supreme Court justice who is defying a federal judge’s order that is allowing homosexual “marriage” to be recognized in the state.

Dr. Jay Richards, a writer, speaker and Catholic University of America research professor, suggests that Justice Moore (pictured at right) made a good counter-point during the interview by bringing up the Dred Scott case, which ruled in 1857 that slaves were not U.S. citizens.

“Which everyone now recognizes was an injustice,” Richards notes. “But how can you say a law determined by the Supreme Court was unjust unless you had a standard that transcended the laws of the land?”

That was Moore’s legal point to Cuomo, Richards explains, which is that laws, although written by men, “have to be founded ultimately on the laws of God – on the natural law that God has put into the created order.”

According to the CNN transcript, Moore asked Cuomo if he would have honored the Supreme Court’s Dred Scott decision or defied it on the grounds it was unconstitutional.

Cuomo refused to answer even after the justice pointed out he was dodging the question.

The interview included Cuomo suggesting that Moore, who is a Christian, is making legal decisions based on religion without allowing different views that disagree.

“Is that a fair suggestion?” Cuomo asked.

“No, that’s not a fair suggestion,” Moore replied. He then described a U.S. Supreme Court decision, Murphy v. Ramsey, in which the justices ruled that marriage and family are based on the marriage of one man and one woman in a state of matrimony. Other state courts have also agreed with that opinion, he said.

“Naturally it existed hundreds and even thousands of years before the United States even came into existence,” Moore, speaking of natural marriage, told the CNN anchor.

“Right,” Cuomo replied,” but we are a nation of laws and not just God’s law.”

Moore went on to quote the Declaration of Independence and its reference to “unalienable rights,” which are freedoms not given by man – and therefore can’t be taken away – but are entrusted to the government to defend.

“They’re unalienable because they can’t be taken away and they can’t be mandated on the state in this instance,” Moore told Cuomo.

“That’s what Christians think. That’s what the American Founders think,” Richards tells OneNewsNow. “To argue for things like human rights and human equality, you need something that stands outside of the laws of men and judges them just or unjust.”

Cuomo also suggested that “times have changed” after Alabama voters approved a constitutional amendment to ensure legal marriage is defined by the normal definition.

Moore pointed out that 81 percent of Alabama voters approved the ballot measure in 2006.

“They haven’t changed their opinion,” he replied. “The only thing that’s changed is that one federal judge has come in and tried to force upon this state something which she cannot do. Her opinion is not law.”