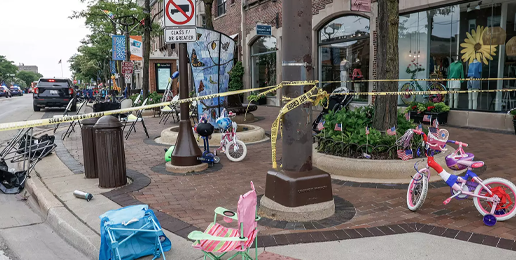 On July 4, 2022, more than 80 rounds of ammunition were fired into the crowds watching the Highland Park July 4th Parade. Seven were killed and dozens were injured in this perverse attack. Predictably, many on the left were again calling for increased gun control. What is a Christian response to the violence that plagues our nation?

No single article can address all the issues, but I want to provide some perspective to the issue of violence and crime in our nation and across the world.

First, the rifle used by the wicked man on July 4 did not cause the crime. The wicked man who used the rifle is to blame. It is the primary job of civil rulers to punish the wicked and protect the innocent as we see clearly in Romans 13:4,

Sadly, the one who carried out the great evil on July 4 will not suffer the wrath that he should experience in this life. Part of the problem in our nation and around the world is that true justice is not meted out to murderers and others who commit violent crimes which inevitably leads to more violent crime. Very likely the Highland Park shooter will spend the rest of his life in prison, but that is not the truly Biblical form of justice he deserves.

We would all love to keep weapons out of the hands of criminals. This is easier said than done. However, it is wicked when elected officials treat law-abiding citizens as criminals simply because they own a weapon of the same model that a criminal used to murder people.

According to the United Nations Office on Drugs and Crime, the United States in 2020 ranked 20th for total murder rate. The U.S. Murder Rate in 2020 was 6.3 per 100,000 people. Switzerland, a country noted as having a fairly high rate of gun ownership, ranked 68th on the list with a murder rate of 0.5 per 100,000 people. Australia, a country often praised by liberals for restricting gun ownership, in 2020 ranked 52nd with a murder rate of 0.9 per 100,000. (It should be noted that Australia does have a much higher rate for sexual assault; it is more than twice that of the U.S.)

Third, there is a massive discrepancy in U.S. cities when it comes to murder rates which have nothing to do with access to guns. Both Chicago and Rockford have higher murder rates than Dallas and Houston. Are guns easier to get in Chicago (which bans them) than in Houston (which does not)?

Fourth, wicked politicians through promotion of violence and foolish COVID policies caused much harm to our nation. As a result, homicides were up 33 percent in cities across America. This is not the fault of guns but wicked men and women along with politicians who failed in their duties according to Romans 13.

Finally, throughout Illinois we may be just seeing the tip of the iceberg when it comes to crime thanks to the recently passed the 764-page SAFE-T “crime-bill” that will go into effect on January 1, 2023. Even Democrat politicians have been sounding the alarm on the dangers that are in store because of this bill. James Glasgow, Will County State’s Attorney, recently was warning about the criminal that will be set free from the Will Country jail connected with these “reforms.”

May the Lord have mercy. May God’s people be bold in their witness and wise in their voting.