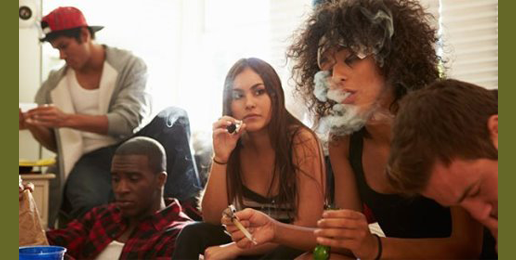 America has known greatness because the majority of Americans living in our constitutional republic led lives tempered by inward moral constraints rather than outward government oppression.

But the downside of liberty comes when those freedoms are severed from that inner moral compass: as fewer folks in the nation honor God and His Word, the hard-fought-for liberty becomes license to do what feels good at the moment with little thought of future consequences. The United States has indeed become a nation reminiscent of 11th century B.C. Israel:

In those days there was no king in Israel: every man did that which was right in his own eyes. (Judges 21:25)

Just one such illustration of license: the marijuana legalization debate. For years, physicians and drug enforcement officials have warned that marijuana is gateway drug, a drug that could lead to abuse of stronger drugs.

As recently as the spring of 2016, the venerable New York Times, the Left’s bible of newsworthiness, published an article by Robert DuPont, “Marijuana Has Proven to Be a Gateway Drug.” DuPont, president of the Institute for Behavior and Health and the first director of the National Institute on Drug Abuse writes [emphasis mine]:

It should come as no surprise that the vast majority of heroin users have used marijuana (and many other drugs) not only long before they used heroin but while they are using heroin. Like nearly all people with substance abuse problems, most heroin users initiated their drug use early in their teens, usually beginning with alcohol and marijuana.

There is ample evidence that early initiation of drug use primes the brain for enhanced later responses to other drugs. These facts underscore the need for effective prevention to reduce adolescent use of alcohol, tobacco and marijuana in order to turn back the heroin and opioid epidemic and to reduce addiction in this country.

Marijuana use is positively correlated with alcohol use and cigarette use, as well as illegal drugs like cocaine and methamphetamine. This does not mean that everyone who uses marijuana will transition to using heroin or other drugs, but it does mean that people who use marijuana also consume more, not less, legal and illegal drugs than do people who do not use marijuana.

The legalization of marijuana increases availability of the drug and acceptability of its use. This is bad for public health and safety not only because marijuana use increases the risk of heroin use.

There can be no better prima facie evidence than Colorado.

Colorado Amendment 64, The Personal Use and Regulation of Marijuana, passed in November of 2012 and was then implemented in January 2014. With the passage of that amendment, a Pandora’s box of drug evils was opened, the consequences of which should have been foreseen.

A former Teller County (Colorado) sheriff said the repercussions of pot legalization were a major headache for law enforcement. Note that the amendment states, “DRIVING UNDER THE INFLUENCE OF MARIJUANA SHALL REMAIN ILLEGAL.” But sheriffs and policemen had no means to measure marijuana intoxication. And what about having pot in the vehicle? Would there be “open container/baggy” stipulations?

Over time, as drug use climbed, other negative effects emerged, especially among teens.

We are at a crossroads. Legalizing marijuana will have lasting negative effects on future generations. The currently legal drugs, alcohol and tobacco, are two of the leading causes of preventable illness and death in the country. Establishing marijuana as a third legal drug will increase the national drug abuse problem, including expanding the opioid epidemic.

And just what is happening in Colorado today?

Drug abuse is now the No. 1 killer of adults younger than 50 years old, according to Dr. Donald Stader of Swedish Medical Center.

Many people first receive powerful painkillers in the emergency room, then are given prescriptions to take home.

The goal of a new project is to stop opioid abuse before any patient has a chance to become addicted.

Stader, an emergency room doctor, said the problem among those younger than 50 is frighteningly widespread, “worse than cancer, worse than accidents, worse than HIV AIDS. This is really an unprecedented epidemic on a scale we’ve never seen before.”

Stader is a key member of a pilot program launched by the Colorado Hospital Association and the Colorado American College of Emergency Physicians.

Facing a surge in opioid abuse and related overdose deaths, Colorado authorities on Monday unveiled a plan to distribute the life-saving drug naloxone — known by its trade name, Narcan — to first responders across the state’s hardest hit areas.

The program “will begin saving lives within days,” said Rob Valuck, head of the Colorado Consortium for Prescription Drug Abuse Prevention and a University of Colorado pharmaceuticals professor. “It will save dozens to hundreds of lives over the coming year here in Colorado. It’s just critically important.”

The initiative will send 2,500 dual-dose packages of the handheld opioid blocker to law enforcement and other first responders in 17 counties with high rates of drug overdose deaths. It comes at a time when officials say someone in Colorado dies of an overdose roughly every nine and a half hours and the rate of opioid deaths has surpassed that of traffic fatalities.

In the years since, Colorado has seen an increase in marijuana related traffic deaths, poison control calls, and emergency room visits. The marijuana black market has increased in Colorado, not decreased. And, numerous Colorado marijuana regulators have been indicted for corruption.

In 2012, we were promised funds from marijuana taxes would benefit our communities, particularly schools. Dr. Harry Bull, the Superintendent of Cherry Creek Schools, one of the largest school districts in the state, said, “So far, the only thing that the legalization of marijuana has brought to our schools has been marijuana.”

Marijuana advocates cite anecdotal evidence supposedly supporting pot as an innocuous and even beneficial substance. And there is some support for medicinal use of marijuana oils devoid of the THC–or tetrahydrocannabinol–the compound responsible for the hallucinogenic/psychological effects of cannabis.

But the evidence against recreational marijuana use was available before legalization in Colorado and is mounting. Legalizing it at the federal level would be perilous for the nation.

Jeff Hunt warned,”We’ve seen the effects in our neighborhoods in Colorado, and this is nothing we wish upon the nation.”

Don’t fall for the pro-pot ruse. Smoking marijuana is neither harmless nor without consequences.

The truth is, legalizing the possession and smoking of pot is a bad idea.

Cutting Through the Fog of Marijuana