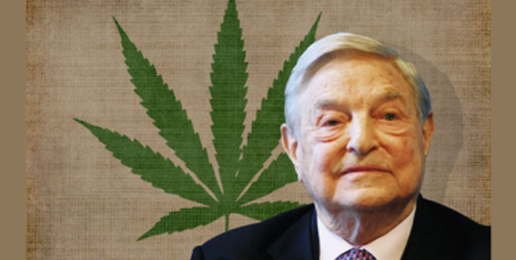 A Narco-Nation of Potheads, Courtesy of George Soros
01.20.20
PRINT

Billionaire George Soros was named “Philanthropist of the Year” by Inside Philanthropy magazine for his “…fight for academic freedom in Central Europe, and his resistance to the rising tide of authoritarianism worldwide.”  The former is a reference to gender studies programs and the latter concerns his ongoing campaign to undermine existing governments, causing chaos that makes more money for hedge fund currency manipulators and short-sellers like himself.

In the United States, he is best known for almost single-handedly creating a narco-nation through legalization of marijuana, causing human suffering and environmental devastation on a scale most people do not yet comprehend.

With the nation focused on the opioid danger, and President Donald J. Trump accusing China of pumping fentanyl into the veins of American victims through Mexico, the marijuana problem has gotten less attention. Indeed, liberal politicians and prosecutors, some of them getting Soros money, are treating the dope as a harmless substance and even a money-maker for local and state governments.

For one of the most sensational examples of a notorious pothead, consider Aaron Hernandez, the former NFL star who became a convicted killer and then killed himself in prison. The subject of a new Netflix series, “Killer Inside: The Mind of Aaron Hernandez,” he was a chronic marijuana user throughout college and his NFL career who experienced brain damage from the drug. The case proves a direct link between marijuana, mental illness, and violence.

In California, legal dope was supposed to displace illegal dope. But illicit cannabis cultivation sites are proliferating, offering a cheaper product than the government-approved variety. The Siskiyou County (California) Board of Supervisors voted on a new Declaration of Local Emergency that refers to illegal growers being responsible for “hundreds of pervasive fire hazards, insecticides, pesticides, rodenticides, fertilizers, trash, and unsanitary conditions which severely impact health, safety and quality of life for countless county residents…”

It’s in Barack Hussein Obama’s state of Illinois that we see some of the recent damage being done.

Illinois last year became the first state to legalize the marijuana business through legislation rather than by referendum and placing excise and sales taxes on the “product.” We can already see the predictable result — marijuana-related emergency room visits are on the rise. The local ABC-TV station in Chicago quotes doctors as saying the most common symptoms of the new potheads in Illinois are restlessness, heart palpitations and anxiety, but that “In some cases we are seeing full on psychosis, agitation, hallucinations.”

Incredibly, Illinois Lieutenant Governor Juliana Stratton was one of the first in line to purchase the dope. She bought clementine-flavored marijuana edible gummies and paid with cash. The scene was captured by CNN as she was pictured among hundreds of early-morning customers at a Chicago marijuana dispensary.  She probably went to the front of the line, but some people waited hours in order to buy their “recreational marijuana” and get “high.”

David E. Smith of the Illinois Family Institute comments, “Not only have lawmakers failed to do their due diligence before passing this marijuana law, but they also failed to heed the compelling research that indicates how regular use of marijuana affects young people, including an increased risk of psychiatric illnesses and a permanent loss of IQ points.”

In fact, this is the plan – dumb people down so they ruin their lives and then have to be dependent on the state for the rest of their lives. The potheads are fast becoming an important new constituency for the socialist-minded.

Before they actually navigate their way to the polls, they can relieve their pain by employing another “hemp” product – CBD or cannabidiol.  CBD is being hawked all over, even on the Rush Limbaugh show, and is being advertised as a treatment for “muscle soreness” and “everyday discomfort.” But many complaints have been filed with the FDA over the false medical claims made about CBD.

Dr. Kenneth Finn comments, “These products are everywhere, but there is little scientific evidence to support the hype that surrounds them.” He says unregulated CBD products hitting the market might be contaminated with heavy metals, pesticides, fungicides, rodenticides, insecticides, molds, E. coli, or fungus.

Official dope distribution is supposed to fill a financial gap. In Illinois, the sixth-biggest state, by population, Politico reporter Theodoric Meyer reports that it has seen its credit rating cut to near-junk status in the decade since the financial crisis. “Its bonds are now considered as risky as those of Russia and Romania,” he notes. “Its pension system is in worse shape than that of almost any other state.”

Writers Ted Dabrowski and John Klingner note that the population of Illinois dropped by 100,000 people between 2010 and 2018 and few of the state’s counties have been spared. “That means that 93 of the state’s 102 counties have shrunk since 2010,” they note. Adam Schuster, Director of Budget and Tax Research at the group, Illinois Policy, reports that 36 percent of the money the state allocates to education will be diverted away from teachers and students to meet required pension payments for retirees.

Former Illinois pension chief Marc Levine is quoted as saying a federal bailout may be required, making this a matter affecting all taxpayers, not just the saps remaining in Illinois.

The “progressive” politicians have virtually bankrupted the state, forcing thousands to flee, and have turned to the cruel exploitation of potheads as a sure-fire money-maker to stave off the final countdown to fiscal oblivion. But legalized dope means more wards of the state who need government help.

Now this is going national. “Once a politically dangerous subject,” notes Trevor Hughes of USA Today, “legal marijuana has become something of a de facto platform plank for the 2020 Democratic candidates: All support either legalizing or decriminalizing its use, and the differences lie in how far the candidates are willing to take it.”

Since 22.2 million people have used marijuana in the past month, this is fertile ground for votes. In a bid for votes, candidate Pete Buttigieg actually toured a “cannabis dispensary” in Las Vegas while commenting that he smoked dope a “handful of times a long time ago.”

President Trump, on the other hand, can just say no. He lost his brother to alcoholism and should consider speaking out against the Soros-funded marijuana craze before more lives are ruined and lost. His Surgeon General, Vice Adm. Jerome M. Adams, is already speaking out about the health risks of marijuana use. He needs the backing of his president.

Roger Morgan, author of Soros: The Drug Lord. Pricking the Bubble of American Supremacy, notes the elevated levels of mental illness, addiction, suicides, traffic deaths and the unseen mental and physical defects to babies and future generations from the use of marijuana and other mind-altering drugs.  He adds, “America can never be great again if a major percentage of its young people are brain damaged, mentally ill, addicted or dead.”​

This article was originally published at USASurvival.org. Cliff Kincaid is president of America’s Survival, Inc. www.usasurvival.org