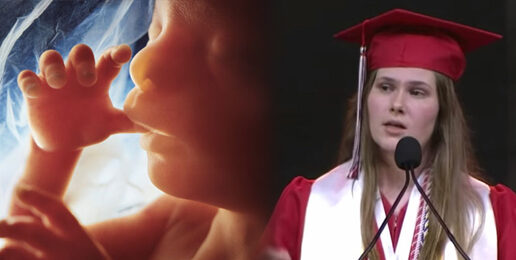 Paxton Smith, a card-carrying member of the Cult of Self, just revealed her narcissistic bona fides in her valedictory diatribe advocating for human slaughter at Lake Highlands High School in Richardson, Texas. She dumped her pre-approved speech and replaced it with a controversial political polemic.

In an act of surpassing selfishness and presumptuousness, Smith used a once-in-a-lifetime family celebration to spread her poisonous belief that women’s rights depend on their ability to have their children killed, and she did that in front of the young siblings, grandparents, and parents of her classmates.

To make a contemptible story worse, in multiple interviews Paxton Smith’s father Russell Smith said he feels “immense pride” in his daughter’s decision to ruin other people’s special day. Apparently, Russell Smith has no feelings of sorrow about the eagerness of his daughter to be free to exterminate inconvenient grandchildren.

Paxton Smith was motivated by rage at Texas legislation that prohibits the killing of humans after the beating of their hearts can be detected. ABC News offered this bizarre description of the bill:

It bans abortion once the rhythmic contracting of fetal cardiac tissue—aka the “fetal heartbeat”—can be detected.

The phrase “rhythmic contracting of fetal cardiac tissue” was not in scare quotes, but “fetal heartbeat” was. You can’t make this stuff up.

Here’s some of what Paxton Smith inflicted on families:

I was going to talk about TV and media and content. … However, under light of recent events, it feels wrong to talk about anything but what is currently affecting me and millions of other women in the state.

… Starting in September, there will be a ban on abortions after six weeks of pregnancy, regardless of whether the pregnancy was a result of rape or incest.

Six weeks. That’s all women get. … so, before they have a chance to decide if they are emotionally, physically and financially stable enough to carry out a full-term pregnancy, before they have the chance to decide if they can take on the responsibility of bringing another human being into the world, that decision is made for them by a stranger. …

I have dreams and hopes and ambitions. Every girl graduating today does. And we have spent our entire lives working towards our future. And without our input and without our consent, our control over that future has been stripped away from us.

And I cannot give up this platform … when there is a war on my body and a war on my rights.

Smith “feels” it would have been “wrong” not to usurp a family celebration by surreptitiously substituting a defense of human slaughter that she knew would offend audience members for the speech she had submitted for approval. Maybe she ought not put such stock in her feelings in the future.

Smith implies that the absence of rape and incest exceptions makes abortion laws an even more grievous moral offense. Is she saying that humans conceived in violence are less worthy than others? Are they less human? Are they less deserving of protection?

Smith frets that six weeks—the point at which the rhythmic contracting of fetal cardiac tissue can be detected—is not nearly enough time for women to decide if they want to have their babies killed. She claims they need more time to decide if they’re “emotionally, physically, and financially stable enough” to bring “another human being into the world.”

Words to Smith: First, in order for an abortion to take place, “another human being” is already in the world.

Second, any woman who is too emotionally, physically, or financially unstable to care for a child that is already in the world, can relinquish him or her to the loving care of stable moms and dads. Is killing a child rather than allowing him or her life in the care of others really the more compassionate, just, and loving option?

Prefacing comments about her dreams with an unseemly mention at a graduation ceremony about the possibility of her contraceptive failures, Smith asserts that all her hopes, aspirations, dreams, and efforts for the future would be dashed by carrying a pregnancy to term. Is that true? Is it likely? In the scales of justice, how does Smith weigh her hypothetical dashed dreams against the actual crushed body of her child?

Signs of cultural decay and decadence are ubiquitous. The most prevalent signs pertain to the intertwined issues of disordered sexuality and its necessary corollary, human slaughter. Without the ability to sacrifice one’s own child (or children) to the god of Self, the ritual of promiscuous sex would not be part of America’s sordid daily life. Human sacrifice is an essential sacrament in the Cult of Self.