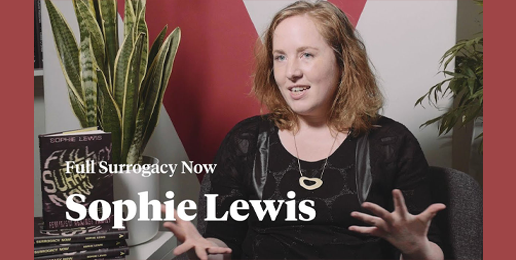 Euphemistic language is an essential tool of all efforts to promote evil as good. Watch anti-life, anti-woman, anti-human-rights “feminist” Sophie Lewis defend human slaughter through such absurd language-torturing that it would be comical if it weren’t serving such an evil end:

In the past the strategies that our side has tended to use have included a kind of ceding of ground to our enemies. We tend to say that abortion is, indeed, very bad, but we say, “Luckily it’s not killing, luckily it’s just a healthcare right.”

We have very little to lose at the moment when it comes to abortion, and I’m interested in winning radically. And I wonder if we could think about defending abortion as a right to stop doing gestational work.

Abortion is, in my opinion—and I recognize how controversial this is—a form of killing. It’ s a form of killing that we need to be able to defend. I am not interested in where a human life starts to exist…. The other end of the spectrum is learning to die well… and let each other go at the end of our lives as well as the beginning.

But looking at the biology of this kind of hemochorial placentation helps me think about the violence, that, innocently, a fetus metes out vis-a-vis a gestator. And that violence is an unacceptable violence for someone who does not want to do gestational work. The violence that the gestator metes out to essentially go on strike, or exit that workplace, is an acceptable violence.

Now that panicked, anti-life dogmatists can no longer deny that the product of conception between two humans is a human, they’ve shifted into rhetorical overdrive, saying, “Well, of course, it’s human, but it’s not a person,” the womb is a “work place,” pregnancy is “gestational work,” and  human gestation is “violence.” At least she admitted abortion kills.

But after acknowledging that abortion “is a form of killing,” Lewis shockingly admits to being completely uninterested in figuring out if the living thing being killed is a human life. In admitting such extraordinary incuriosity (especially for a scholar), she implicitly concedes that abortion may kill a human being. Only sociopaths have no qualms about killing innocent humans.

“What the heck is ‘hemochorial placentation,’ you may be asking yourself, and how does it do “violence” to “gestators”? Defining it is easy-peasy. “Hemachorial placentation” is a $10 technical term that refers to the natural process by which a mother’s body sustains her developing offspring by bathing his or her chorion (outer layer of tissue enveloping the baby) in nutrient-rich blood (hemo) via the placenta (placentation).

Hemachorial placentation doesn’t mete out violence—innocently or otherwise—unless, of course, “violence” is redefined to include non-violent, natural processes. Lewis needs to redefine this natural process as violence in order to justify the actual violence mothers and their hired killers mete out to humans in the womb—humans that have no part in nor cause the alleged “violence” of “hemochorial placentation.”

Lewis, author of the book Full Surrogacy Now: Feminism Against Family, should be able to notice the difference between letting “each other go at the end of our lives” and voluntarily snuffing out others at the beginning of their lives.

As demonstrated by both the anti-woman Lewis and the moral empty shells at Governor JB Pritzker’s Kill-Babies-Bill celebration—shells held upright by a constant refilling of hot air and puffed-up pride—euphemisms are the stock-in-trade of every Leftist.

Louisiana lawmakers voted on Wednesday to ban [abortion] after the pulsing of what becomes the fetus’s heart can be detected…. The measure would require an ultrasound test for any woman seeking to terminate a pregnancy, and forbid abortion if the test detects embryonic pulsing.

Someone should drive a stake through the New York Times’ organ of pulsing and then through their embryonic organ of moral reasoning.

One mother’s embryonic moral reasoning is evident in a PBS documentary on abortion in which she is seen starting the chemical abortion of her twins. But first some euphemistic language from the abortionist who says, “This is the mifepristone that will stop the pregnancy from growing…”

Finally, hear the empty and chilling words of the mother, spoken about and to the twins she’s  aborting:

Thank you for choosing me. And I’m honored to be given this gift of life. And also, I can’t do it right now.