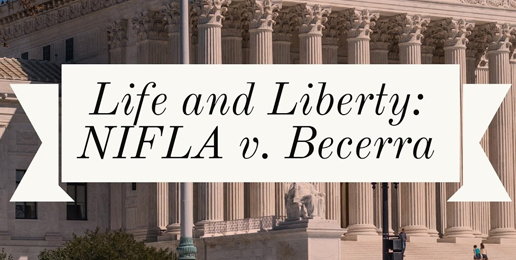 On Tuesday [March 20th], the U.S. Supreme Court heard arguments for NIFLA vs. Becerra, the case which focuses on the “law that requires pregnancy centers to notify women that the state offers subsidies for abortion.” In other words, pro-life pregnancy centers, which exist to offer women alternatives to abortion, would be required by law to tell their clients that the state can subsidize their abortions. But that hardly tells the story of how absurd this law is.

Certainly, it’s bad enough that the state thought it had the right to require pro-life pregnancy centers to inform their clients about abortion opportunities. The whole reason for the existence of these centers, many (or almost all?) of which are faith-based, is to tell pregnant women that they don’t have to kill their babies. To talk to them about the humanity of that child in the womb. To inform them about adoption. To share stories with them about other women who chose not to abort.

How on earth can anyone require them to say as well, “However, in case you’re interested, the state will help you terminate your pregnancy and snuff out that precious life in your womb.”

But, to repeat, that is only part of the story.

Hank Berrien explains that the “law was adopted in California in 2015, and forced the pregnancy centers to post a prominent notice if they had ‘no licensed medical provider’ available. If the centers were licensed, they were forced to notify clients that the state offers ‘free or low-cost’ contraception, prenatal care and abortion.”

The requirement would be so absurd that even ultra-liberal Justice Ruth Bader Ginsburg had a problem with it. As Berrien notes, “After Michael P. Farris, a lawyer for the centers, said advertisements, including billboards, would have to offer the information in large print and in 13 languages, Justice Ruth Bader Ginsburg turned to the lawyer for California and stated, ‘If you have to say that, those two sentences in 13 different languages, it can be very burdensome,’ she said.”

And exactly how “burdensome” is “very burdensome”? The Los Angeles Times reports this enlightening dialogue:

“What would happen if an unlicensed center just had a billboard that said, ‘Choose Life.’ Would they have to make the disclosure?” [Justice Anthony] Kennedy asked.

“It would be 29 words, in the same size font as ‘Choose Life’?” Kennedy continued.

Yes, Farris said, “and in the number of languages required by that county.”

Kennedy said he had heard all he needed to hear. “It seems to me that means that this is an undue burden. And that should suffice to invalidate the statute,” he said.

In practical terms (and using hypothetical language, not even as cumbersome as what California requires), a billboard ad would look like this (relying on Google translate, and just sampling some of the state’s top 12 foreign languages):

Yes, this is what California required, as completely ridiculous as it seems. (And note again: This was not the 29-word announcement that Justice Kennedy referenced, nor did I post it in 13 languages.) And what message would get out most to the public? “Choose life” or, “The state is here to help pay for your abortions”?

For many reasons, this ridiculous law is not only burdensome. It is not only an infringement of individual and corporate freedoms. It is the imposition of state-endorsed speech, in strict violation of the conscience of many of its citizens. In short, it is an absolute outrage.

That’s why major media outlets, like the Los Angeles Times, stated that, “The Supreme Court sounded ready Tuesday to strike down a California disclosure law that requires pregnancy centers — including those that are faith-based — to notify women that the state offers subsidies for abortion.”

It’s about time to push back against some of California’s craziness.