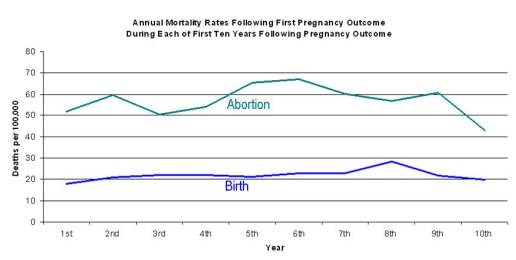 A new study of the medical records for nearly half a million women in Denmark reveals significantly higher maternal death rates following abortion compared to delivery. This finding has confirmed similar large-scale population studies conducted in Finland and the United States, but contradicts the widely held belief that abortion is safer than childbirth.

The findings of these record linkage studies from three different populations contradict the conclusion that abortion is safer than childbirth. That view has traditionally been based on death certificates alone or on voluntary reporting to government agencies.

According to Dr. David Reardon, an author of the new Danish record linkage study, the study published in February was an “apples versus oranges” comparison of two very incomplete and incomparable sets of data.

“Doctors and other officials completing death certificates almost never know if the deceased had a history of abortion,” said Reardon, who directs the Elliot Institute. “Record linkage, such as we have done, is the only way to objectively identify and compare death rates associated with pregnancy outcome using the same yardstick.”

Reardon said the February study was “worse than a junk in, junk out analysis” because its authors excluded record linkage studies, all of which contradicted their claim that childbirth is 14 times more dangerous than abortion, from their literature review. He believes that evidence of abortion-associated risks is being suppressed for ideological and political reasons.

“Population control activists in the United States and Europe, governments, NGO’s, and academic circles are pressuring developing countries to legalize abortion,” he said. “Their long-standing documented objective is to reduce birth rates among the poor. But that objective is being disguised by the more politically correct sales pitch which asserts that abortion is safer than childbirth and represents a positive benefit to women’s health. Any evidence which undermines that sales pitch is therefore doggedly ignored or suppressed.”

For example, the mortality studies in Finland found a three-fold increased risk of suicide in the first year following an abortion compared to the general population and a six-fold higher risk compared to women who gave birth. The highest suicide rate was within two months of the abortion.

In the California studies, women with a history of abortion had higher rates of psychiatric treatment over a four-year study period and were 187 percent more likely to die of heart diseases, which can also be affected by stress.

“Numerous studies have linked abortion to higher rates of substance abuse, self-destructive behavior, psychiatric hospitalization, sleep disorders, eating disorders and a general increase in treatments sought for medical care,” said Reardon. “More research is needed to explore how these or other pathways may help to explain the higher mortality rates observed in record linkage studies.”

This article was originally posted at the LifeNews.com website.

Note: Amy Sobie is the editor of The Post-Abortion Review, a quarterly publication of the Elliot Institute. The organization is a widely respected leader in research and analysis of medical, mental health and other complications resulting from abortions.