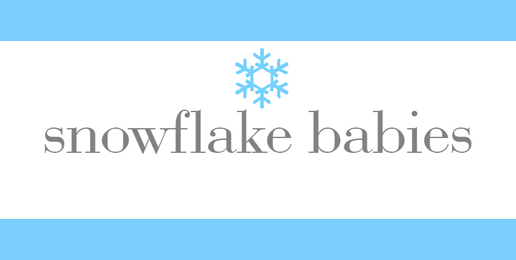 Snowflake Babies: More Precious and as Unique as Their Namesake
Written By Tamara Cochran Louris   |   01.26.18
PRINT

Snowflakes are a thing of beauty, wafting through the air, hushing the cacophony of non-nature noise, painting the landscape a fresh vivid, pristine white. King David, a sinful man who found mercy in repentance, references both the pre-born and snow in Psalm 51:

2 Wash away all my iniquity
and cleanse me from my sin.

3 For I know my transgressions,
and my sin is always before me.

4 Against you, you only, have I sinned
and done what is evil in your sight;
so you are right in your verdict
and justified when you judge.

5 Surely I was sinful at birth,
sinful from the time my mother conceived me.

6 Yet you desired faithfulness even in the womb;
you taught me wisdom in that secret place.

Fresh snow is the the perfect picture of a fresh start. Snowflakes are also amazing in their individuality, their stunning uniqueness:

It is unlikely that any two snowflakes are alike due to the estimated 1019 (10 quintillion) water molecules which make up a typical snowflake, which grow at different rates and in different patterns depending on the changing temperature and humidity within the atmosphere that the snowflake falls through on its way to the ground.

Thus, the name Snowflake Baby is so very apt — a baby who began life as a fertilized, frozen embryo. As written at Nightlight.org:

Just as each snowflake is frozen, unique and a gift from heaven, so are each of our embryo adopted Snowflake Babies. We hope to help each donated embryo grow, develop and live a full life.

I hate Sanctity of Human Life Sunday because I’m reminded that we have to say things to one another that human beings shouldn’t have to say.

The very fact that these things must be proclaimed is a reminder of the horrors of this present darkness.

Hannah Strege, the world’s first Snowflake Baby, made headlines, in print and on TV, when she and her parents joined President George W. Bush in 2006 as he vetoed the embryonic stem-cell research bill. President Bush, surrounded by a “group of families with children who were born from adopted frozen embryos that had been left unused at fertility clinics,” explained:

This bill would support the taking of innocent human life in the hope of finding medical benefits for others. It crosses a moral boundary that our decent society needs to respect. So I vetoed it.”

These boys and girls are not spare parts. They remind us of what is lost when embryos are destroyed in the name of research. They remind us that we all begin our lives as a small collection of cells.

Showing his true colors regarding life, President Obama, in 2013, attempted, mostly unsuccessfully, to defund the Embryo Adoption Program, funded under Section 301 of the Public Health Service Act. It should be noted that Obama was scheduled to be the keynote speaker on April 25, 2013, at Planned Parenthood’s annual gala (with the ironic theme, “Time For Care”) in Washington, D.C. Though he cancelled the dinner address to attend a funeral in Texas, he did speak to the conference the next morning.

In his remarks, the former president thanked Cecile Richards:

Cecile, thank you for the warm introduction, and thank you for the outstanding leadership that you’ve shown over the years. You just do a great, great job. I want to thank all of you for the remarkable work that you’re doing day in, day out in providing quality health care to women all across America. You are somebody that women — young women, old women, women in between — count on for so many important services. And we are truly grateful to you.

And concluded with, “Thank you, Planned Parenthood. God bless you.”

Newsflash Obama: God does not bless any organization that profits from the wholesale murder of the unborn.

This is the battle we fight and must win. Death versus life.

I call heaven and earth as witnesses today against you, that I have set before you life and death, blessing and cursing; therefore choose life, that both you and your descendants may live. (Deuteronomy 30:19)

And fighting joyfully for life, Nightlight prominently posts this verse on their site:

Before I formed you in the womb I knew you;
Before you were born I sanctified you. (Jeremiah 1:5)

The ever-increasing use of infertility treatments, particularly in vitro fertilization (IVF), has resulted in an ever-increasing number of embryos in cryo-preservation. For the families who have remaining embryos they don’t plan to use, the only solution that gives the embryos a opportunity to live is donation for reproduction. Those embryos need a friendly womb!

In the course of one election, people in this nation chose a man who has, almost surprisingly, become the most pro-life president in America’s history. Barack Obama became the first president to speak to the national annual meeting of Planned Parenthood. Donald Trump is the first president to address the National March for Life.

Obama wanted to defund the Embryo Adoption Program,Trump would like to defund Planned Parenthood.

And now, at a time when the pro-life message and movement seems to be winning, these precious Snowflake Babies should receive attention.

As written at Students for Life of America:

Not only is adoption a viable and preferable option to abortion, even the excess embryos from In Vitro Fertilization (IVF) can be adopted. The children who result from these adoptions are called “snowflake children” because “embryos are unique and fragile, just like a snowflake.”

The first embryo adoption program began in 1997 by Nightlight Christian Adoptions, a California and South Carolina-based non-profit organization; and since that time Nightlight has allowed 247 embryos to achieve their ultimate purpose — life. This program meets a great demand, as there are over half a million frozen embryos (pre-born children) in cryo-banks in the United States waiting for a chance to develop into babies; just as there are many women who actually want to be pregnant but are unable.

But there are those on the other side of the battle who decry the Snowflakes program.

In an article at NBCnews.com titled “The problem with embryo adoption” author Arthur Caplan, Ph.D. argues:

One of the strangest outcomes of the ongoing debate over embryonic stem-cell research is the government’s use of taxpayer money to support a little-known private organization called Snowflakes.

While helping people have babies is ethically commendable, there is something very strange about extending the use of the term “adoption” to embryos.

So what’s the big deal about a religious group that believes all embryos are children and is trying to find them “adoptive” parents among infertile couples using IVF? Well, actually there is a lot that is wrong.

Moreover, using terms like “adoption” encourages people to believe that frozen embryos are the equivalent of children. But they are not the same.

The older a woman gets, the less likely her embryos are to become babies.

The battle of life versus death is so clear. Caplan scoffs at the notion that a fertilized embryo is fully human. But we answer to the Author of life who tells us to choose life. And we must always bear in mind God’s words written in Jeremiah, “Before I formed you in the womb I knew you; before you were born I sanctified you.” 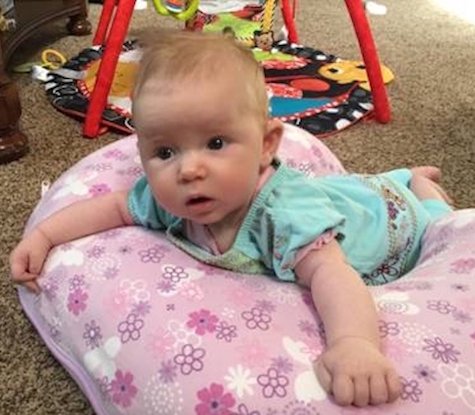 These embryos should not be treated as disposable tissue. Consider the case of Marley Jade, a healthy baby girl born on June 3, 2016, who was a Snowflake baby for 17 years before being adopted! 17 years!

God knows these little ones. And we should never stop fighting the good fight for life.

Yes, snowflakes are beautiful. But Snowflake Babies are beautiful and amazing and a testimony of God’s handiwork — unique and precious and worth fighting for.

Links to further information are below.

Does the Rise in IVF Popularity Leaves Thousands of Babies in Limbo?