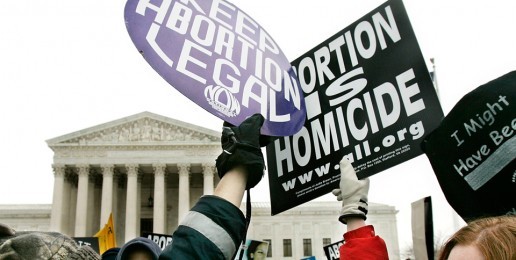 The pro-aborts are losing. They know it, and they hate it.

As LifeNews.com reported in January: “CNN released the results of a new poll showing a majority of Americans want all or most abortions prohibited – a clear pro-life majority.”

Indeed, the winds of life are blowing free the foul stench of a pro-abortion culture of death.

This is why President Obama and his fellow pro-abort zealot, HHS Secretary Kathleen Sebelius, have unilaterally, arbitrarily and unconstitutionally forced, through Obamacare, every taxpaying American citizen to fund “free” abortion-on-demand.

This draconian overreach is in perfect keeping with the 2012 DNC platform, which, for the first time, admits without shame: “The Democratic Party strongly and unequivocally supports Roe v. Wade and a woman’s right to … abortion, regardless of ability to pay.”

Psalm 8:28 commands: “Defend the weak and the fatherless; uphold the cause of the poor and the oppressed.”

To be sure, there can be none more oppressed than the tens of millions who, over four short decades, have been – and will continue to be – slaughtered within the safe haven of their own mothers’ wombs.

With its 1973 Roe decision, the U.S. Supreme Court put the government’s official stamp of approval on mass murder. Since then, the battle lines have been drawn. This is war. They, “pro-choicers,” are the bad guys, while pro-lifers are the good guys. It really is that simple – that black and white. It’s good versus evil.

History will reflect as much.

To the unenthusiastic mother, politically motivated abortion violence is deviously portrayed as an acceptable escape from what may seem a desperate situation. To the innocent child, it is – without fail and without due process – execution by torture.

Consider the horrific practice of Partial-Birth Abortion, innocuously tagged “Intact Dilation and Extraction.” This is a practice so brutal and so needless that even the liberal American Medical Association (AMA) admitted that it is never necessary under any circumstances.

During a partial-birth abortion, the abortionist pulls a fully “viable” child – often kicking and thrashing – feet first from her mother’s womb, leaving only the top of her head in the birth canal. This is so the abortionist can technically claim to be performing an abortion, rather than committing murder.

He then stabs the child through the base of her skull with scissors, piercing her brain until her kicking and moving about suddenly and violently jerks to a halt. Next, he opens the scissors to enlarge the wound, inserts a vacuum tube and sucks out her brains, thereby collapsing her skull.

Her now limp and lifeless body is then cast away like so much garbage.

Appalling, isn’t it? Infanticide by any objective measure.

So, naturally, Mr. Obama, reasonable fellow that he is, agrees with the AMA, correct? He and other “pro-choicers” were the first to applaud the high court when it upheld a ban on this Hitlerian practice, right?

Barack Obama unbelievably called the Court’s decision in Gonzales v. Carhart part of a concerted effort “to steadily roll back the hard-won rights of American women.” In so doing, he revealed to the world that leftist support for abortion “rights” has everything to do with politics and nothing to do with science or “health care.”

Moreover, consider Mr. Obama’s opposition to the “Born Alive Infant Protection Act.” It passed both houses of Congress in 2002 with overwhelming bipartisan support. Born Alive very simply requires that when a baby survives an attempted abortion – when she is “born alive” – further attempts to kill her must immediately cease, and steps must be taken to save her life.

Yet, incredibly, this president, while serving in the Illinois Senate, vehemently opposed the bill’s Illinois twin. He complained that requiring efforts to save the live victim of a botched abortion is “really designed simply to burden the original decision of the woman and the physician to induce labor and perform an abortion.”

This is common-sense stuff. The human heartbeat has long been indisputable proof of life both within and without the womb.

Still, and not surprisingly, even as the state legislature was overriding the Democratic governor’s veto of the new law – SB 134 – the ACLU and other pro-abort radicals were vowing to challenge it in court.

Mathews Staver, founder and chairman of Liberty Counsel, has vowed to preserve it: “If asked, Liberty Counsel will defend this law without reservation, free of charge for the people of Arkansas, born and unborn,” he said.

“In keeping with medical advances, history and common sense, the Arkansas legislature has said that the life of a 12-week-old unborn child with a detectable heartbeat is protected under the law.”

And well it should be. SB 134 is just the beginning. Brave lawmakers in Arkansas have provided the template for other states to follow.

They’re on the right side of history.

Indeed, history has a way of repeating itself. The Roe decision was not the first time the U.S. Supreme Court has so disgraced our nation. Roe v. Wade represents the twin bookend to the Court’s shameful 1857 Dred Scott decision.

As with Dred Scott, Roe’s fate, I believe, is certain. It’s just a matter of time. History will eventually judge Roe v. Wade every bit as harshly as Dred Scott.

Call yourself “pro-choice”? Shame on you. You’re no better than a modern-day slave master. Dump the garbage and join the right side of history.

There’s plenty of room over here.