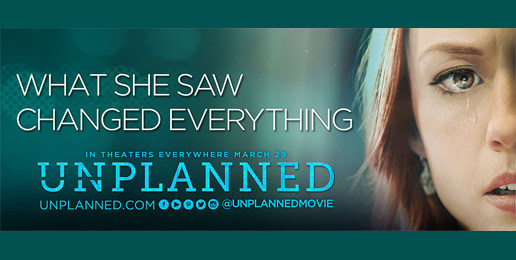 As I wrote in, “Planned Parenthood, An Unnecessary Evil“:

Planned Parenthood’s predecessor, The American Birth Control League, was founded by Nazi-inspiration Margaret Sanger, the godmother of modern eugenics, in 1921.

Too many in our society entertain misconceptions about Planned Parenthood, owing to the biased coverage of Mainstream Media and the relentless marketing of the taxpayer-dollars-rich organization.

And yes…those babies can and do feel pain.

Abby swallowed the “we help women” Planned Parenthood ruse, and in spite of her Christian upbringing, justified her involvement in abortion. She was removed from the gore of the actual abortions until she wasn’t…and everything changed.

Abby’s bio on her site details:

During her eight years with Planned Parenthood, Abby quickly rose through the organization’s ranks and became a clinic director.

…Abby loved the women that entered her clinic and her co-workers. Despite a growing unrest within her, she stayed on and strove to serve women in crisis.

All of that changed on September 26, 2009 when Abby was asked to assist with an ultrasound-guided abortion. She watched in horror as a 13 week baby fought for, and ultimately lost, its life at the hand of the abortionist.

Johnson’s testimony is powerful: when confronted with the absolute horror of abortion, she wept, heartbroken at her complicity in the brutal killing of thousands of tiny babies.

Unplanned tells the heart-rending story of Abby’s involvement in Planned Parenthood, her visceral realization of the truth about abortion, and her repentance leading to a calling to save babies’ lives and help post-abortive mothers find peace and healing.

Watch the trailer below:

After that providential September 2009 day, as written at Abby’s site, AbbyJohnson.org:

At that moment, she fully realized what abortion actually was and what she had dedicated her life to. As it washed over Abby, a dramatic transformation had occurred. Desperate and confused, Abby sought help from a local pro-life group. She swore that she would begin to advocate for life in the womb and expose abortion for what it truly is.

Today, Abby travels across the globe sharing her story, educating the public on pro-life issues, advocating for the unborn, and reaching out to abortion clinic staff who still work in the industry. She is the founder of And Then There Were None, a ministry designed to assist abortion clinic workers in transitioning out of the industry. To date, this ministry has helped over 430 workers leave the abortion industry. Abby lives in Texas with her husband and seven precious children.

And now pro-life Americans everywhere have the opportunity to jump in the fray, to fight for life in this escalating battle of death versus life. We know God is NOT silent on the subject:

This day I call the heavens and the earth as witnesses against you that I have set before you life and death, blessings and curses. Now choose life, so that you and your children may live [Deuteronomy 30:19]

Unplanned tells the redemptive and powerful story of Abby Johnson and her transformation from a Planned Parenthood clinic director, unwittingly advancing a culture of death, to a champion of women and babies and LIFE!

Unplanned is the inspiring true story of one woman’s journey of transformation.

All Abby Johnson ever wanted to do was help women. As one of the youngest Planned Parenthood clinic directors in the nation, she was involved in upwards of 22,000 abortions and counseled countless women about their reproductive choices. Her passion surrounding a woman’s right to choose even led her to become a spokesperson for Planned Parenthood, fighting to enact legislation for the cause she so deeply believed in.

Until the day she saw something that changed everything, leading Abby Johnson to join her former enemies at 40 Days For Life, and become one of the most ardent pro-life speakers in America.

There is power in lives transformed by God’s grace, and Unplanned uses the big screen to display that power magnificently.

Unplanned opens in theaters March 29, and the website has a sign-up page to be alerted when tickets are available HERE.

I saw Abby in person last year, and with a church full of pro-lifers, tears streaming down our faces, was utterly amazed at the depth of the abortion industry’s depravity but the height of God’s mercy and grace.

I would implore — in the Apostle Paul’s language — I would beseech each and every one of you to share this article, to share the Unplanned information! Perhaps you can even help plan a private showing or buy out a showing at a local theater.

This movie could strike a death knell on Planned Parenthood in the wake of President Trump announcing “a final ruling last Friday to ban Title X grants from going to abortion providers like Planned Parenthood.”

This could very well be the beginning of the end of an evil organization which has snuffed out the life of over 13 million babies for profit since Roe was wrongly decided in 1973.

Again, from the Unplanned site:

Unplanned is the most important movie you’ll ever see on the most controversial issue of our time. No matter which side of the fence you’re on, no one will leave this film unmoved by Abby’s journey.

Unplanned might just open millions of eyes to the truth about Planned Parenthood and begin to thwart Margaret Sanger’s despicable scheme.

And perhaps we can all have a part in the victory of life over death.