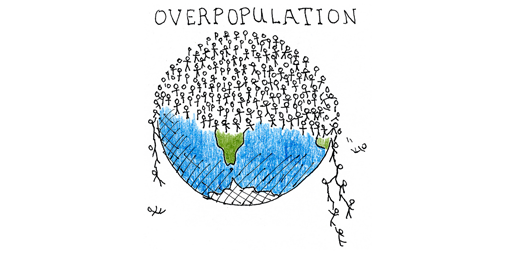 Overpopulation. From its usage in Thomas Malthus’s notorious 1798 “Essay on the Principle of Population” to its resurgence in Paul Ehrlich’s 1960 “The Population Bomb,” the word invokes images of a bleak, hopeless future. As the story goes, the ever-increasing birth rate triggers rampant food shortages and systemic resource deprivation, culminating with the human race extinguishing itself. Ehrlich went as far to predict an imminent cataclysm: “England will not exist in the year 2000.”

The solution? In an effort to stave off this destruction, population control ensues.

Now, population control has returned with a vengeance, reincarnated as the antidote to the Left’s favorite existential threat—climate change. According to the narrative, population growth correlates to detrimental environmental impact. As French President Emmanuel Macron said of Africa’s burgeoning population, “When countries still have seven to eight children per woman, you can decide to spend billions of euros, but you will not stabilize anything.” The Center for Biological Diversity launched a “condom campaign” to alert people to the perceived dangers of having children by distributing birth control in “colorful packages depicting endangered animals,” which sport poorly rhyming mantras like, “Wear a condom now, save the spotted owl.” Progressive author Jill Filipovic’s tweet, however, best encapsulates this ideology: “Having children is one of the worst things you can do for the planet. Have one less and conserve resources.”

First, progressives overstate the gravity of overpopulation. As the National Vital Statistics System noted, fertility rates are sharply declining, causing some perturbed scientists to foreshadow the antithesis of previous concerns–a population “implosion.” By implication, the data the Left uses to fuel overpopulation aversion is inconclusive at best. Furthermore, National Geographic points out that the entire world’s population could fit standing shoulder-to-shoulder in Los Angeles, which demonstrates the sheer amount of space in the world for each individual.

Second, population control—and along with it the mantra that discourages procreation to preserve spotted owls—severely devalues human life. As Alexandra Desanctis observes in the National Review:

Who among us has the right to decide when a child is “extra,” and how many is too many? Or maybe we should get down to business right away and begin by eliminating all of the “extra” people currently milling about the globe, taxing the earth’s precious resources with their costly carbon dioxide emissions. Any volunteers?

Of course, there’s a big difference between offing a child standing next to you and saying that people ought to choose not to have that child in the first place. But both presume that human life is valuable only if — and should be brought into the world only if — a certain subset of powerful and wise elites give the okay.

To classify children as a blight because of a tenuous connection with their carbon footprint, to caution parents to avoid children on the basis of preserving endangered species, to contend that procreation is one of the worst things for humanity are affronts to human life and have devastating repercussions for a shared public understanding of the value of human life.

The greatest threat to mankind’s prosperity is government, not population growth. For example, Zimbabwe was agriculturally rich but, with government interference, was reduced to the brink of mass starvation. Any country faced with massive government interference can be brought to starvation. Blaming poverty on overpopulation not only lets governments off the hook but also encourages the enactment of harmful, inhumane policies.

In other words, population control enthusiasts miss the point. While they’re alleging that increasing population entails mass starvation, they miss the empirical reality that it is government interference, not population growth, that is the real problem for humanity.

Ultimately, only “greater personal liberty, private property rights, the rule of law and an economic system closer to capitalism than to communism” comprise a system that solves the harms falsely imputed to overpopulation and ensures the protection of human value.