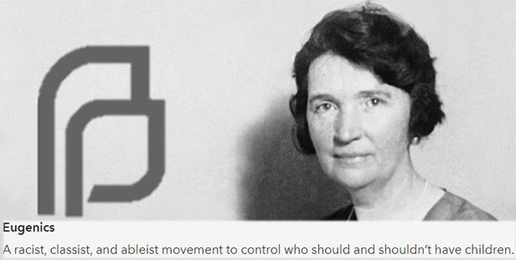 According to the Planned Parenthood Glossary of Sexual Health Terms, “Eugenics” is “a racist, classist, and ableist movement to control who should and shouldn’t have children.”

Racism, classism, and ableism are all horrible ideas. These ideas say that a human being’s worth is based on their ethnicity, position, or abilities. Eugenics applies those ideas to reproduction, and says that only the “good” people should give birth.

Margaret Sanger was a big supporter of eugenics. She held eugenic views until the day she died. Her views about promoting birth control as a way to “regenerate” the human race and eliminate “undesirables” were known around the world.

Even MSNBC admits that Margaret Sanger was a “proponent of eugenics.”  She was clear in her public writings about her goal of using birth control to prevent the “chance and chaotic breeding” of the lower classes.

She believed that white people were the superior race, that those of intelligence and means were better than those who were uneducated and stupid, and that those who were sick, diseased, or mentally infirm should never reproduce. Margaret Sanger was racist, classist, and ableist.

The Pro-Life, Pro-Family view which is guided by Biblical Christianity is not racist, classist, or ableist. The Family Foundation works to protect every human life, no matter what their ethnicity, their position, or their abilities.

God created all people in His image, not just some. There are no degrees of value based on the place someone was born.

Margaret Sanger said that the Australian Aboriginal was “the lowest known species of the human family, just a step higher than the chimpanzee in brain development.” The Bible says that “God made man in his own image.” (Genesis 1:27)

Despite the fact that Eugenics is a racist, classist, and ableist movement to control who should and shouldn’t give birth, Planned Parenthood still celebrates their founder, Margaret Sanger, by giving out the “Margaret Sanger Award” every year.

Planned Parenthood was founded by a eugenicist, and continues to promote eugenic ideas. Biblical Christianity answers them by loving all people, because all people are made in the image of God.

This article was originally published by the Family Foundation.

A New Eugenics
b
a
x
r