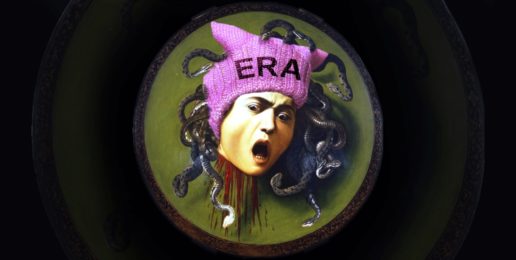 Like Medusa, the Equal Rights Amendment (ERA) has reared its chthonic head again, and this time it’s wearing a silly pink hat over all those snakes.

Since the ERA says precisely nothing about women, why do feminists continue to claim that it’s all about women’s rights? In fact, the harm the ERA will cause will redound primarily to women.

What the ERA will do is prohibit the public recognition of sexual differentiation, and we all know who really wants to pretend that biological sex has no meaning.

Moreover, of which basic rights are women now deprived? The right to vote, assemble, associate, speak, petition their government, exercise their religion? Nope, we’ve got all those.

So, let’s peek under those pink hats and see what snakes are writhing about, restive and eager to emerge and strike:

A New Mexico Supreme Court judge wrote that “there is no comparable restriction on medically necessary services relating to physical characteristics or conditions that are unique to men. Indeed, we can find no provision in the Department’s regulations that disfavor any comparable, medically necessary procedure unique to the male anatomy… [the restriction on funding abortions] undoubtedly singles out for less favorable treatment a gender-linked condition that is unique to women.” This judge neglected to mention the inconvenient presence of preborn babies that render abortion wholly different from any “medical procedure unique to the male anatomy.” Treating different conditions differently does not violate any commitment to equality, fairness, or justice.

To ratify this proposed amendment, “progressives” are attempting to circumvent deadlines that expired over three decades ago on the supposedly moribund ERA. The ERA, first introduced in 1972, had a seven-year deadline for ratification, which, by a congressional resolution was extended another three years.

The proposed Equal Rights Amendment needs 38 states for passage. By its final deadline in 1982, it had the approval of only 35 states, so supporters developed the “three-state strategy” which seeks to avoid returning the issue to all 50 states. In effect, Leftist lawmakers claim that since the ERA was extended once, deadlines can be extended in perpetuity. In other words, to Leftists legal deadlines, like other laws, can be ignored at their whim.

Leftist lawmakers defend their strategy to pass the ERA by comparing it to the passage of the Twenty-seventh amendment to the U.S. Constitution 203 years after it was proposed. They fail to mention, however, that the Twenty-seventh Amendment, unlike the ERA, did not have a ratification deadline.

Proponents of the ERA also argue that because the ERA ratification deadline was in the preamble rather than the body of the ERA, it’s essentially irrelevant and non-binding. But the Congressional Research Service explains the following:

In the case of the 18th, 20th, 21st, and 22nd Amendments, the “sunset” ratification provision was incorporated in the body of the amendment itself. For subsequent amendments, however, Congress determined that inclusion of the time limit within its body “cluttered up” the proposal. Consequently, all but one of the subsequently proposed amendments proposed later (the 23rd, 24th, 25th and 26th, and the ERA) placed the limit in the preamble, rather than in the body of the amendment itself.

It’s important to note that prior to the ratification deadline, five states had sought to rescind their approval of the ERA. The Supreme Court of the United States was poised to take up their cases when the deadline took effect at which point the Court held that their cases were moot. If the deadline is now rendered moot by liberal lawmakers, one would assume that those states that sought to rescind their approval would be able to proceed with their pursuit of “rescission of acts of ratification.” In other words, it would seem that those states that wished to rescind their approval of the ERA would be able to pursue that effort because their pursuit ended based on the legal legitimacy of the ratification deadline.

Leftists have yet another effective weapon in their arsenal to crush culture: Just add the word “rights” to any legislation they want and presto change-o, they’ve got themselves a go-to soundbite.

Anyone who believes marriage has a nature central to which is sexual differentiation becomes “anti-‘gay’ rights.” Just ignore the fact that those who are erotically attracted to persons of their same sex have no intrinsic right to unilaterally redefine marriage by stripping it of its central constituent and most enduring, cross-cultural feature.

And anyone who opposes a wholly unnecessary amendment to the Constitution becomes “anti-women’s rights.” Just ignore the facts that the amendment doesn’t mention women and that there is not a single right of which women are deprived. Oh, and please ignore those snakes writhing under Medusa’s silly pink hat.