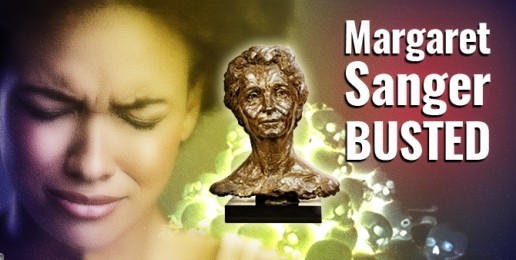 In late August a group of about two dozen African-American pastors staged a protest outside of the National Portrait Gallery in Washington, D.C.

The National Portrait Gallery isn’t the kind of D.C. landmark you normally associate with protests, but then again, this wasn’t your standard-issue D.C. protest. It was an attempt to set a long-distorted historical record straight.

The protesters demanded the removal of a bust of Planned Parenthood founder Margaret Sanger from an exhibit entitled “Struggle for Justice.” To understand why they’re making this demand, you need to know about both the exhibit and Sanger’s views.

Nearly all of those honored were controversial in their lifetimes and some remain so today. But to include Sanger among them is embarrassing. The exhibit tacitly acknowledges this by telling visitors about Sanger’s “association with the eugenics movement, which included promotion of forced sterilization of those deemed mentally unfit” while reassuring them that the movement “for a time was endorsed by many of the era’s prominent thinkers.”

This doesn’t even rise to the level of a half-truth. It’s more like a quarter-truth. For starters, none of the other honorees, many of whom were Sanger’s contemporaries, were associated with the eugenics movement in a way that she was. In fact, Sanger remained part of the movement even after some of the movement’s founders and luminaries had repudiated their previous views.

More to the protestors’ point, the exhibit says nothing about Sanger’s racism. The inconvenient truth is well-documented. In “The Myth of Race: The Troubling Persistence of An Unscientific Idea,” Robert Wald Sussman wrote the following about Sanger: “Margaret Sanger . . . advocated mass sterilization, incarceration of the unfit, and draconian immigration restrictions, and she included [Madison Grant’s book] ‘Passing of the Great Race’ on the eugenics reading list of her journal Birth Control Review.”

One of Grant’s biggest fans was Adolf Hitler, who quoted liberally from “Passing of the Great Race” and referred to the book as “my bible.”

This was the book Sanger was recommending to her followers.

As the Reverend E. W. Jackson said at the protest, “If Margaret Sanger had her way, Rosa Parks and Martin Luther King would never have been born . . . It’s an outrage the national museum would honor such a person and add insult to injury by putting her in the Struggle for Justice exhibit.

Truer words have seldom been spoken. Yet the museum insists that Sanger will stay. The willingness to distort history is a testimony to the hold that the sexual revolution has over elite opinion. As my colleague John Stonetreet put it, “Much better people have been removed from hero status after doing far more good and far less evil than [Sanger]. But a nation that provides abortion pills to 12-year-olds over the counter without a prescription is pre-committed to Sanger’s legacy despite the facts.”

It’s a pre-commitment that can be blinding. Even inside a carefully-lit museum.

This article was originally posted at Breakpoint.org.