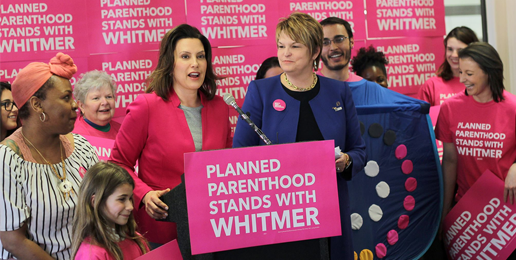 Before discussing Whitmer’s idiotic statement, let’s remember that abortion—i.e., the deliberate killing of a human prior to his or her delivery—is never necessary to save the life of a pregnant woman. While there are emergencies that require a pregnancy to be terminated to save the life of a mother, terminating a pregnancy never requires the prior and intentional killing of her baby—also known as human slaughter. To be clear, a pregnancy can be terminated via a Caesarean section, which does not involve the direct killing of a baby. Sometimes the emergency delivery of a baby prior to full gestation will result in its death, but such a death is not an abortion. Therefore, abortion is never necessary to save a mother’s life, and if it’s never necessary to save a woman’s life, abortion is by definition non-essential.

Governor Whitmer begs to differ, arguing irrationally the following after being asked about her pandemic regulations regarding abortion:

We stopped elective surgeries here in Michigan. Some people have tried to say that that type of a procedure is considered the same and that’s ridiculous. A woman’s health care, her whole future, her ability to decide if and when she starts a family is not an election, it is fundamental to her life. It is life sustaining and it’s something that government should not be getting in the middle of.

Whitmer, like so many other leftists, can’t even bring herself to say “abortion” (let alone the more fitting term “feticide”). Instead, she uses the cumbersome euphemism “that type of procedure.” Whitmer’s statement, dripping with irony that was apparently lost on the witless Whitmer, refers to the intentional slaughter of the unborn as a “life-sustaining” procedure.

Still avoiding the term “abortion,” Whitmer employs the strategically useful go-to term of cultural regressives everywhere: “woman’s health care.” Someone should ask Whitmer how the slaughter by abortion of 431,000 little women every year in the U.S. alone constitutes “health care” for those females.

Whitmer must believe the entire country just fell off the turnip truck if she expects anyone to believe that joint replacements to end daily and often excruciating pain and disability are elective and must cease during the pandemic while freely chosen abortion—a procedure that leftists call “pro-choice”—is non-elective and essential. 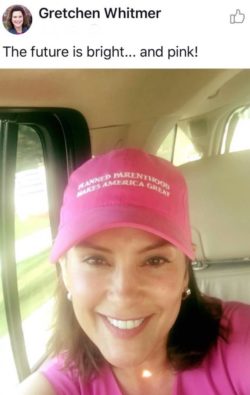 Whitmer tweeted a photo of herself wearing a pink hat that says in all caps, “PLANNED PARENTHOOD MAKES AMERICA GREAT,” accompanied by her words “The future is bright… and pink!” That photo encapsulates the depraved “progressive” vision of a “great” America. For “progressives,” slaughtering the unborn at any point from conception to birth for any or no reason and forcing taxpayers to subsidize this elective, non-essential human slaughter makes America great.

Whitmer’s hubris and  incompetence extend beyond her “getting in the middle of health care” by designating the practice of women freely hiring “doctors” to kill their offspring “health care.”  She also banned  “lawn and landscaping services, motor boating and golf. Large stores can’t sell paint, furniture or garden equipment. People aren’t allowed to travel between residences, which blocks them from visiting second homes and hunting cabins.” In so doing, Whitmer provided yet more evidence that regressives lack both moral compasses and an ability to think coherently. We should have learned through history that leaders who lack both morality and rationality use the exercise of raw power to achieve their destructive ends.