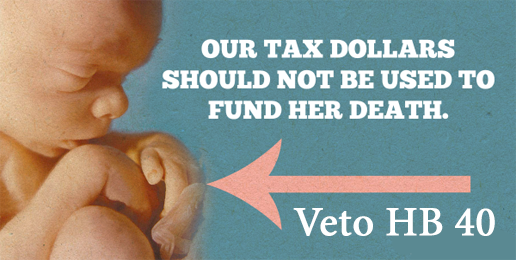 If signed into law by Illinois Governor Bruce Rauner, HB 40, which passed in both the Illinois House and Senate, will force taxpayers to subsidize abortions for women on Medicaid and for women covered by state employee health insurance.

Feticidal maniacs in Illinois—including lawmakers—are desperate to have Rauner sign this bill into law. They reason that since abortion is legal, the public should subsidize it. Leftists believe all Illinois taxpayers should pay for poor women’s and state employees’ choices to have their unborn children killed. Ironically, while Leftists command that men never express an opinion on abortion, Leftists also say male taxpayers should fund abortion. Word to Leftists:

1.) Those tiny humans growing inside women get half their DNA from men.

2.) The issue of whether the product of conception between two humans is a human with rights is a human rights issue—not exclusively a women’s issue.

3.) There are no criteria that Leftists can manufacture to defend the right of some humans to snuff out the lives of other humans that apply only to incipient human lives. Whether those criteria are intrinsic or extrinsic to humans in the womb, they all can be applied to humans who escaped the torture chamber that the womb has become. Intrinsic criteria such as immature development, dependency status, lack of sentience, or lack of perfection apply to humans outside the womb as well. Extrinsic criteria such as being considered a financial or emotional burden also apply to humans outside the womb.

4.) According to Leftists, men can have wombs, menstruate, become pregnant, and give birth, and, therefore, abortion is a men’s issue.

5.) Using the language of “rights,” feticide-defenders are appealing to the respect Americans have for “negative rights”—also known as liberties—(e.g., the right to vote, assemble, exercise one’s religion, and speak freely), which are not accompanied by any obligation for others to subsidize them. But what feticide-defenders are really suggesting—without explicitly saying—is that women have a “positive right” (i.e., an entitlement) to abortion, which imposes a duty on others to subsidize it. Abortion, however, is not an entitlement, and society has no obligation to pay for women to get them. Neither wanting something; nor really, really wanting something; nor experiencing suffering from not obtaining this desperately desired thing means the public has an obligation to provide it.

7.) We, as a benevolent society, have created safety nets to provide for basic health care for those who are unable to provide for it themselves. No matter how many times feticide-defenders call the killing of incipient human life “health care,” it’s not. Killing human fetuses is neither health care nor reproduction. It’s death facilitation and anti-reproduction. If Leftists want to help poor women and state employees kill their offspring, they have the choice and negative right to do so.

In an editorial appearing in Crain’s Chicago Business, K. Sujata, president and CEO of the Chicago Foundation for Women (CFW), frets about the implications of an HB 40 veto. She worries about the economic interests of pregnant women, many of whom choose to have sex when they can’t afford or don’t want to provide for the needs of humans who may result from their choice to have sex:

HB40 also removes restrictions on reproductive health care coverage that put women’s economic security at risk…. In order for women and their families to achieve full economic security, all women in Illinois must be able to make the important decision of when to start or grow their family.

And how does killing humans—including female humans—whose lives are just beginning fulfill this core principle of the Chicago Foundation for Women:

We believe that equality is a universal human right, and we uphold respect and dignity as guiding principles in all our work.

If Leftists really believe that more developed, sentient, able-bodied, and cognitively superior humans have the right to exterminate less-developed and cognitively and physically impaired humans whose self-awareness is diminished or absent, then they are kindred spirits with Princeton University bio-unethicist Peter Singer who makes the same argument but applies it to post-natal humans as well. What possible ethical difference do a few days or few inches of birth canal make in terms of the right to kill?

Remember ten years ago when Hillary Clinton expressed her belief that abortion should be “safe, legal, and rare. And by rare, I mean rare“? Northwestern University law professor Andrew Koppelman expressed the same sentiment during a forum at Northwestern Law School several years ago. When I asked why abortion should be rare if incipient human life is so devoid of personhood as to be undeserving of even minimal constitutional protection, he had no answer.

If Leftists really wanted abortion to be rare, they wouldn’t be fighting tooth and nail for the passage of HB 40, which, it is estimated, will result in an additional 15,000 abortions each year at taxpayer expense.

But no one actually believes Leftists care about whether abortion is rare or common. To them destroying human fetuses is no different from excising tumors.

Wombs should be sanctuary spaces and no-kill people shelters where all humans are safe. Governor Rauner should kill HB 40.

You can also send Gov. Rauner a message via Twitter: @GovRauner