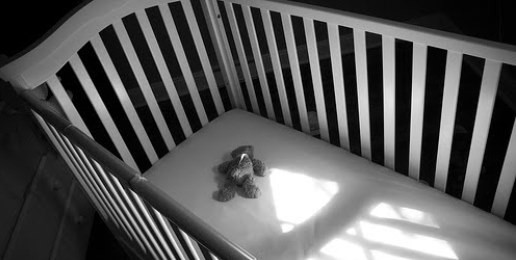 That’s a dramatic decline from growing by 400,000 in the 21st Century’s first decade to 150,000 in the second. In statistics circles, it’s called “negative growth.”

Sunday, the Bloomington Pantagraph’s editorial board was very concerned about Illinois losing population:

The biggest reason the state is losing population is a greater number of people moving to other states. In state-to-state migration last year, the state had a net loss of almost 95,000 people, the highest rate in decades. That sort of loss has a devastating impact on tax revenue for state government and local governments.

Illinois’ population dwindling is a “clear symbol of a state in decline and that trend needs to be reversed as quickly as possible,” the Pantagraph said.

While Illinois had a net loss of nearly 95,000 people, there’s another negative population trend neither the Pantagraph or the Chicago Tribune cited: the dramatic decline of Illinois live births over the last decade.

In a chart recently published by the Illinois Department of Public Health, the agency showed that in 1990, 196,000 babies were born in Illinois. That proved to be the high mark for Illinois in the past 24 years. 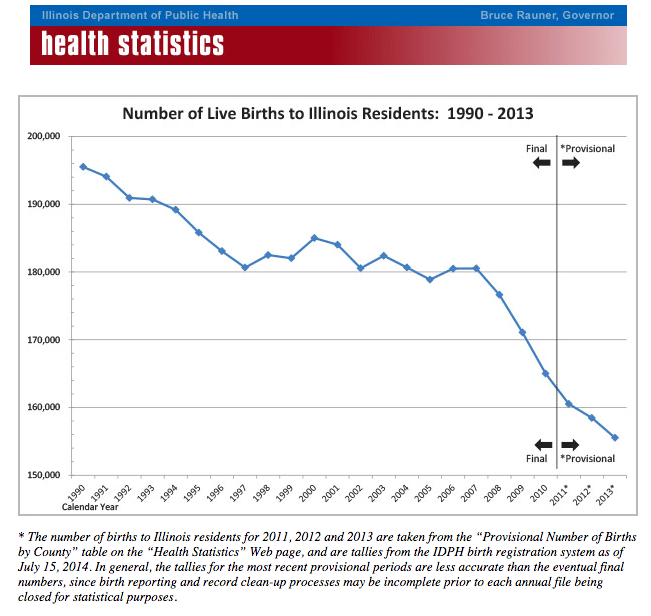 For seven years, the state’s live birth numbers fell consistently until 1997, when it hit 180,000. The numbers huddled around that mark for eleven years, and then when the 2008 recession hit, not only did people leave Illinois seeking jobs, they took their babies and future babies with them. Live births in Illinois began to fall precipituously.

“A declining number of live births is a sign the state is downtrodden and destroying its human capital,” Dr. Carlson told Illinois Review. “Illinois politicians have dug a hole. Any smart young person would look at those numbers and leave Illinois.”

Dr. Carlson said up until the 1990s, Americans were having enough babies to just about replace themselves – the average woman’s total fertility was a little of 2.1 in 2000 and now it’s at 1.7 levels.”Weve not seen a child-rich culture since between the 1940s and 1970s,”

All the while, state governments, like Illinois, are spending funds extravagantly, expecting the next generation to pay the bills, while the numbers of future taxpayers dwindles.

“Across the U.S., the culture is anti-natal, anti-child,” Dr. Carlson said. “The focus is on personal gratification  and deconstructing natural marriage. The price is being paid.”

While politicians will say they demonstrate the value of children by investing billions in public education, those funds are really not for the children, Dr. Carlson said.

However, there are some peripheral segments of society that are doing their part to populate the next generation, he said.

The old order of the Amish are having children, as are American Mormons and conservative Catholics and some Protestants, Dr. Carlson said. “We need to protect those groups’ religious liberties and parental rights. They’re key to the future.”

This article was originally posted at the IllinoisReview.com news blog.

Be Fruitful and Multiply

The Anti-Natalist Fallacy
b
a
x
r