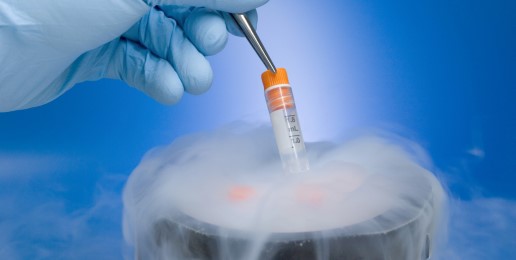 Ever notice how the media has a knack for pulling on our heart-strings in an attempt to divert us from the real facts of the matter? In logic, this fallacy is called, “A red herring.”

A great example of this is the news coverage surrounding an amendment proposed by U.S. Representative Andy Harris (R-MD) regarding the protection of embryonic stem cells. But before we discuss the current legislation, let’s get a running start, and get some background on the issues behind it.

The Christian, pro-life position is that human life begin at conception. A normal human embryo has all 46 chromosomes innate to human development, and is already pre-programmed with the biological data needed to grow to a fully-formed adult. Every human embryo contains an eternal soul that must be protected.

The Ethics of In Vitro Fertilization (IVF)

When an infertile couple is seeking to conceive, one method they may pursue is IVF. In this process, it is common for multiple embryos to be created. The ensuing problem is that some of these embryos are not used by the hopeful parents, leading to the dilemma of what to do with the frozen embryos that are left over from this procedure. Storing the embryos indefinitely can be costly, and often the parents have no practical way to bring them to full-term.

People choose different approaches to dealing with these embryos, including:

From a Christian worldview, clearly only one of these choices is viable (adopted embryos), as the other choices destroy human life.

We must be careful in our discussion of these topics with others, that we have the issues clear in our mind. Christians are NOT opposed to stem cell research. There are different sources for stem cells, including adult stem cells derived from human fat. These stem cells offer the promise to potentially cure all sorts of physical maladies. We encourage this kind of research and hope for medical breakthroughs along with everyone else.

What we oppose, is the practice of conducting stem cell research on human embryos, because of the fact that a human life is destroyed in the process.

So back to the current legislative situation. Military personnel who serve in our armed forces are sometimes injured in their line of duty in a way that causes permanent reproductive harm to their bodies. Our government has decided to fund IVF options for those veterans who wish to grow their families through this means.

Representative Harris has presented an amendment that specifies that any federal funding provided in any act of law may only be used to provide IVF treatments if such treatments do not result in the destruction of viable human embryos before embryo transfer. His amendment was adopted by a U.S. House Appropriations subcommittee by a vote of 29-21.

There has been an immediate push-back on this, because it would eliminate the immediate thawing, or research options, leaving only continued freezing (at a cost) or donation for embryo adoption. The argument is that this bill is not practical. It is inconvenient and will make this process more difficult for those who want to choose IVF.

The “red herring” in this story is that this involves our wounded military veterans. The media is choosing to portray this as showing a lack of support and compassion for those who have given so much (even potentially their hopes for a future family), in defense of our nation. Anyone who supports the Harris Amendment could be portrayed as unpatriotic, or unsympathetic to our troops.

What Is the Right Choice?

In any situation, we must avoid the tug of emotion and always ask ourselves, “What is the right thing to do?” Pragmatism is the view that “Whatever works is right.” The end justifies the means. It doesn’t matter what approach or method you choose, as long as you get the desired outcome. The problem with that view is that it isn’t wise or safe. Pragmatism has been behind many human atrocities in the past century, including eugenics.

As much as we want to see our veterans receive proper care and medical services, we cannot do so at the cost of human life. They put their life on the line to defend U.S. citizens, and that defense should be extended to unborn Americans as well.

A friend of mine recently put the matter as concisely and clearly as I believe it can be expressed:

“Any legislation that ends with,
‘And then the baby dies…’
is bad legislation.”

Opponents of the Harris Amendment suggest that an embryo isn’t truly human life because it is too small (size), or the embryo doesn’t have cognition (level of development), or it isn’t in the mother’s uterus (environment), or because it can’t sustain life on it’s own if unfrozen (degree of dependency).

Christian apologist, and pro-life advocate, Scott Klusendorf, has created an acronym (SLED) from these arguments that can help us to remember them, and be able to articulate a consistent and rational position on the defense of human life. None of these elements define human life. If you argue on that basis of any of them, you can easily also argue for infanticide or euthanasia.

The worth of a human life can never be equal to convenience on the scale of justice. Once intrinsic human life is devalued, on any level, it is only a matter of time until the taking of more lives will be justified by the same extended arguments.

Let us pray that efforts like Congressman Harris’ will find a hearing and that those in our nation’s leadership will seek to defend the most basic tenet of our inalienable rights: the immutable right to life.

We are excited to have as our keynote speaker this year, former Congresswoman and Tea Party Caucus Leader, Michele Bachmann!  She distinguished herself by not only forming and chairing the Tea Party Caucus in 2010 in the U.S. House but also through her courageous and outspoken pro-life leadership as attested to by her rating of zero from NARAL.