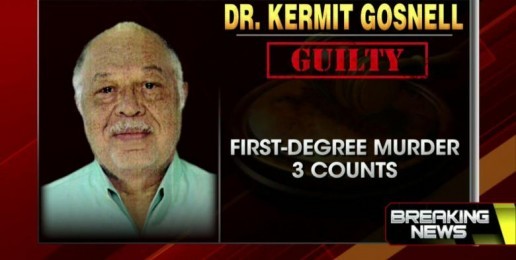 “The guilty charge of Dr. Kermit Gosnell, dethroned ruler of  ‘Gosnell’s House of Horrors’ may spark justice for more women and babies across America,” said Dr. Alveda King, Director of African American Outreach for Gospel of Life Ministries. “Justice is served with this verdict, but injustice will continue unless we end abortion in this country. Gosnell was not the only abortionist who killed mothers and their born babies, he was just the one who got caught. Now we have to turn out attention to charging, trying and convicting others like him.”

Gosnell was convicted of three counts of murder of three babies aborted in his 3801 Lancaster abortion clinic in Philadelphia. He is also convicted of death by involuntary manslaughter of Karnamaya Mongar, who died from drug complications during her abortion procedure in Gosnell’s den.

Tomorrow, King will join host Star Parker of CURE along with Day Gardner of the National Black Prolife Union, Catherine Davis and other African American leaders of the National Black Prolife Coalition in Washington, D. C. for a press conference and briefing. The leaders are asking the question: “Abortion and the impact on Black America…is there a Gosnell in your community?” Like King, the Black Leaders say that Gosnell isn’t an exception, that there are abortion horrors happening in 2013 in abortion facilities all across America. They blame lack of regulations and strong arm lobbying efforts of Planned Parenthood and other abortion advocates for allowing Gosnell and “others like him” to operate and commit horrors that are now being exposed.

King also believes that “once the Cleveland abductions by the Castro brothers are investigated, America will begin to clearly understand that women are often victims of coerced abortion and should be protected from predators. These rescued girls are not the only ones in America who have been forcibly subjected to abortion. Abortion by coercion should be thoroughly investigated and outlawed. For instance, in the Gosnell situation, there is a case of a teenage girl who claims to have been forcibly taken to Gosnell’s clinic and held down by force during a traumatic abortion,” King said, referring to the reports that the abducted girls in Cleveland were hit in the stomach until they aborted babies conceived during their brutal captivity.

“Cases like the Gosnell case and now pending Castro case all go to prove that there is a dehumanization of women and children not just across the globe but here at home that has been swept under the rug for far too long,” King told a group today at a conference on human trafficking held in Atlanta. “Let’s just pray that this Gosnell conviction will spark more justice for women and babies in America as time goes on.”

As a side note, King added: “Charles Ramsey, the ‘hero’ for saving the kidnapped girls in Cleveland is an African American. Finally a black man is noted for doing a good deed. The media just needs to highlight more of these type of human interest reports, not just for African Americans, but for everyone.”