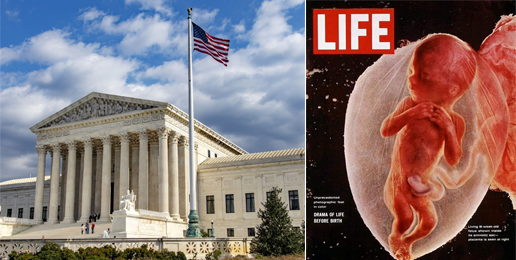 One can only consider it shocking that the first-time ever pre-release leaked opinions of the U.S. Supreme Court Justices (regarding the potential overturning of Roe-V-Wade) was instantly overshadowed by hysterical hatred directed toward the Court, and a fevered, shrill demand to keep abortion legal for any reason throughout a woman’s pregnancy.  Anyone with any regard for life, and especially the lives of helpless and innocent babies, can only be appalled by the calloused demands from the Left that the Nation MUST permit the destruction of these little ones with no questions and no limits. Their death-dealing fanaticism is breath-taking!

The news that the U.S. Supreme Court may overturn Roe v. Wade in the coming months is received as a breath of fresh air by all who love babies; but the instantaneous explosion from the Left reminds us that we are in a nation that is on a trajectory of rejecting God, hating Him and all that He loves. The Bible prophesied that the End Times will be as it was in the days of Noah, for in those days, God “saw that the wickedness of man was great in the earth and that every imagination of the thoughts of his heart was only evil continually.”  (Genesis 6:5)

While some may say there is room for debate over the so-called “hard cases,” such are a tiny fraction of the totality of abortions performed.  The question many are asking is how anyone can even begin to make the case for the other 95 percent plus which are convenience abortions?  Pro-abortionists see unrestricted abortion as fundamental to their ultimate objective, which is total personal autonomy, (the good which is above all other goods).  They refuse to accept any limits, even pushing the envelope to include the killing of newborns. How can any compassionate person demand such?

Mans’ historic inhumanity to man that one reads about in history books is now displayed before our eyes.  The shear barbarity of abortion, especially late term abortions, can no longer be hidden. Technology has opened the termination centers to the public’s eye, yet the pro-death crowd does not flinch or try to explain it away. They double down! This in spite of the fact that a preborn baby at twenty weeks gestation differs from a born baby at forty weeks only in scale.

I believe the answer as to why the Left defends so intensely the killing of the unborn throughout the forty weeks of pregnancy will not be found in logic, law, culture, or history. It will only be found in Scripture. God’s Word alone explains the hyper irrationality and fanaticism behind the fevered passion of the abortion proponents.

First, denying God leaves a power vacuum in the minds of the deniers, and human pride being what it is, each person fills that void with him or herself, the imperial “I.”  (“All we like sheep have gone astray, we have turned everyone to his own way. . . .” (NKJV Isaiah 53:6).  The incongruence of such a perspective cannot be addressed here, but this is the beginning of the irrationality.  (“The fool has said in his heart, ‘there is no God.’” (NKJV Psalm 14:1).

Fifty years ago, cultural critics referred to young Americans as the “Me Generation.”  Who would have ever guessed how much worse the narcissism would get!  Few of those who reject God would actually claim deity for themselves, but they come to act as their own gods; and the attributes one would attach to deity they take to themselves. They reject anything that contradicts their own perspectives and desires, and detest external authorities, claiming the right to make their own choices, to live their own lives, and to formulate their own morality. And in the same way that God rejects competition, so do they. Sourcing their morality in themselves, they accept no boundaries imposed by others and as the imperial “I” they have no scruples about destroying anything or anyone who gets in their way. Self sits enthroned, and pleasure is the greatest good. (What could possibly go wrong?) History has shown that in such situations people are able to accept and carry out unspeakably barbarous acts.

Taking the seats of gods, they tolerate no challenge to their power. In the past few questioned the right of God to take human lives. It was understood that such was His prerogative. Now, those who are gods in their own minds take to themselves God’s prerogatives, including taking human lives at will, and therefore allow no inherent value to human life itself; and without the belief in life after death, death itself becomes inconsequential, especially the deaths of others. Scriptures point out the fact that those who hate Him go beyond carelessness about life to the point that they love death! (Proverbs 8:36). One cannot miss the proliferation of symbols of death in American popular culture. Graphic depictions of skulls, bones, and songs about death are ubiquitous as is also the use of deadly drugs. Rejecting God leads to rejecting a high view of life and produces instead a grievous tolerance of death.

Another consequence of denying God is that of losing the ability to make wise, long-term choices. This is the biblical definition of a fool, (Romans 1:22). God is eternal and calls us to see things from His eternal perspective.  But in rejecting Him, people are rendered fools living for the moment and becoming animalistic with appetites only for immediate self-gratification. Thus, it is not surprising that sexual pleasure now dominates culture. It would be difficult to deny that in the popular culture sexual activity ranks at the pinnacle of human activity, and that all other human activities have become subordinated to it. Moral and boundary free sexual activity has become the “supreme good,” eclipsing everything else, even the lives of unborn children whose very existence hampers their parents’ sexual pleasure for a time.

Unfettered sexual activity mimics drug use as people sacrifice virtually everything for another moment of pleasure. We understand the tragedy of drug and alcohol addiction where the user discards everything he once considered important to satisfy the addiction, often even losing the appetite for food itself. I recall one man’s testimony of selling his dead baby’s shoes to get another bottle of booze. As people embark on the pathway of sexual addiction, we see a parallel recklessness. Everything else is discarded to satisfy an appetite that cannot be satisfied through wanton behavior, thus leaving a trail of disease, depression, destroyed relationships, and dead babies.

One question that I have heard repeatedly since the SCOTUS leak is, “Why is the demand for abortion throughout pregnancy without exception so rabidly demanded?”  Talking heads, leaders of proabortion organizations, and high-ranking Democrat officials have been ranting that to even consider placing any restrictions on abortion is the epitome of evil! It is a very troubling issue, for it reveals a barbarity and inhumanness unlike anything we’ve ever experienced in America. Please stay with me as I try to explain what I believe is at work here, for it is a graphic illustration of the Second Psalm, “Why do the nations rage, and the people plot a vain thing? The kings of the earth set themselves, and the rulers take counsel together, against the LORD and against His anointed, saying, ‘Let us break Their bonds in pieces and cast away their cords from us.’” (NKJV) It is rebels determined to live free from God’s law and justice.

While millions of these Americans claim to believe in no God and reject any subjective truth and authority, I see in Scriptures a clear declaration that God’s existence and His truths are inescapable (Romans 1). Just as one who denies gravity will not float off into space, so it is with God’s moral laws. They are written in our hearts by our Creator, and we cannot escape their effect. In the same way a lawbreaker hates the police, God rejecters hate Christ and anything that points to Him. His justice contradicts their injustice. His love exposes their hate. His grace condemns their selfishness. His goodness contradicts their wickedness. It is as Mark Twain noted, “There is nothing more irritating than a good example.” Thus, there is nothing more galling to God rejecters than the unborn who are the epitome of innocence! The unborn child is both an intolerable representation of the Creator and an impediment to the imperial “I” and therefore must be eliminated! Eerily reminiscent of grade school bullies who destroy other children’s artwork.

These God haters cry that there is no God, but we might, with Shakespeare say, “me thinks they protest too much.” Their hysterics speak of an inner voice they cannot silence which whispers in their ears that every unborn baby belongs to God, whether one week or thirty-nine weeks old. The unborn are all the same to God, and these people know it. It is stamped on their hearts; and for that reason, they cannot allow a value to be attached to a fetus at any stage of development. To allow that second and third trimester abortions are immoral renders first trimester abortions immoral. What God loves they hate, and thus they fight for the license to kill throughout the forty weeks of pregnancy without exception. To allow any restrictions on abortion dethrones the imperial “I.”  Their fanaticism is a de-facto proof of God’s existence and His moral law as well as the intrinsic value of the pre-born child.

Some who, in spite of the evidence against it hold to the intrinsic goodness of man, might argue that it is not possible for people to knowingly do something so grossly immoral as to kill living, innocent babies once they understand it; but one need look no further than the many multinational companies who do business with China, a nation unequivocally known to practice slavery, torture, and murder to know better. Sadly, given enough of a pay-off people are willing to tolerate or commit any kind of immorality or atrocity. The only check on such wickedness is God Himself.

The problem we face in the slaughter of the unborn is not about evidence, science, or facts. It is the rebellion of the heart that cries out against a Creator, a Judge, One to whom we must give an account. Abortions are not performed because there are rational arguments for killing the unborn, but because rebellious people demand a life accountable to no one other than themselves. They reject being burdened by or for anyone. It is narcissism at its worst.

Overturning Roe-v-Wade would force the pro-abortionists to prove over-and-over again in fifty states a point they know they cannot prove! Their only weapon now is shear fanaticism and fear! Facts are simply not on their side.