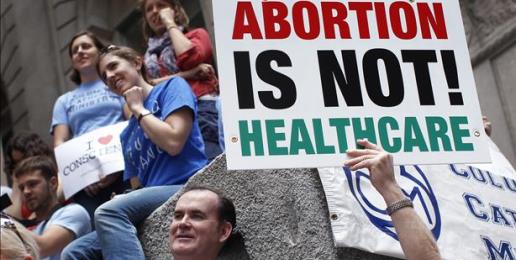 The Government Accountability Office (GAO) recently issued a report revealing that 1,036 plans in Obamacare (also known as the Affordable Care Act) health insurance exchanges are paying for elective abortions.  In other words, U.S. taxpayers are paying for surgical and chemical abortions under Obamacare.

The audit found that in five states all health insurance exchange plans included elective abortion coverage.  In another eight states, 95 to 100 percent of the plans paid for elective abortions.

President Barack Obama had  promised that no federal dollars would be used to underwrite abortion coverage.  He even issued an executive order to that effect to mollify opposition from within his own political party.

Yet the GAO report verifies what knowledgeable observers knew at the time.  The President’s executive order had no legal effect, because it conflicted with the law’s own provisions, which clearly authorized federal subsidies (called “affordability credits”) for abortion coverage.

The GAO audit also revealed that insurers are uniformly failing to collect an abortion surcharge that was required in every health insurance plan that included abortion coverage.  Under that provision, individuals were to be assessed a separate fee of $1 per month for abortion “services,” regardless of the age, gender, or ability to conceive of the insured.

U.S. Representative Randy Hultgren, a pro-life Republican from Illinois, reacted to this report by urging full transparency from the President and for the U.S. Senate to pass the No Taxpayer Funding for Abortion Act (H.R. 7) which ensures the Hyde Amendment, which prevents federal tax dollars from paying for abortions, is implemented across the federal government.

This bill is currently before the U.S. Senate, where U.S. Senate Majority Leader Harry Reid (D-NV) is unlikely to take it up for debate.

U.S. Representative Steve Scalise (R-LA) says that Americans should be outraged.  “Many of us argued at the time Obamacare passed that it would funnel taxpayer dollars to elective abortions.  This independent report validates our claims and proves that yet another Obamacare promise has been broken.”

“We were told we had to pass the bill to find out what was in it.  Now we know what exactly is in it:  corporate welfare for the Administration’s abortion industry cronies.”

The Illinois Family Institute is completely dependent on the voluntary contributions of individuals just like you.

Please consider supporting our work and ministry in the public square.