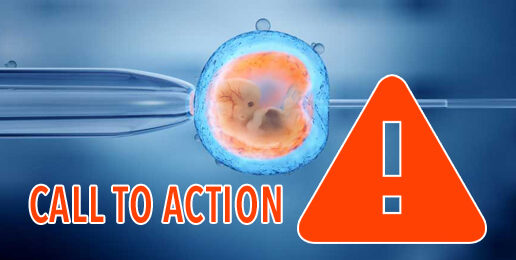 The words of the Weeping Prophet were never so clear:

The heart is deceitful above all things,
And desperately wicked;
Who can know it? (Jeremiah 17:9)

At the Illinois Family Institute, “we combine information with the tools necessary for people to effectively make their voices heard by legislators and other decision makers in Illinois.” Further, IFI is 100% committed to the sanctity and protection of human life from “from conception until natural death.”

At this time, in the scientific research community–which has often worked heroically to develop therapies and therapeutics to save life–there are new guidelines being considered. These guidelines would push the boundaries of research into horrific territory.

Intercessors for America has sounded the clarion call:

An international group of scientists, headquartered in Illinois, has issued new “ethical” guidelines that are alarming. They are growing unborn babies in the womb for 40 days for the sole purpose of killing them for research in grisly experiments.

They are crossing the lines of ethics by:

What in the brave new world is happening?

Researchers at Columbia University in New York have created embryos containing genetic material from three people and are ready to use them to start pregnancies. But they’re at a legal impasse.

The embryos cannot be transferred into a woman’s uterus because of a 2015 congressional amendment that forbids the Food and Drug Administration from considering human research applications “in which a human embryo is intentionally created or modified to include a heritable genetic modification.”

The Scientist reports human-animal chimeras are created in labs:

There are hundreds of different cell types that make up the human body, each derived from a single origin: the fertilized egg. Researchers investigating how this complexity arises have made human-animal chimeric embryos by introducing human pluripotent stem cells into the embryos of other animals, such as mice and pigs.

This is not the kind of research that people who believe in and support the sanctity of human life from conception to natural death would engage in.

For you created my inmost being;
you knit me together in my mother’s womb.
I praise you because I am fearfully and wonderfully made;
your works are wonderful,
I know that full well. (Psalm 139:13-14)

Intercessors for America notes the brave collaboration of a U.S. Representative and U.S. Senator to try to halt such abhorrent research:

One of these issues has been addressed in a proposed bill by Rep. Chris Smith (R-NJ) and Senator Mike Braun (R-IN), the Human-Animal Chimera Prohibition Act of 2021 (HR3542/S 1800) and we want to support this legislation, but we need to do more. Let your state and federal elected officials know that creating human life for the purpose of experimentation is wrong, especially for dubious research.

We ask that you join us in prayer and action!

Pray that this Act will successfully pass. Pray that God will soften the hard hearts of those in Congress and the Senate who may be apathetic to the sanctity of life and the humanity of the pre-born.

Then, we would implore you to contact your representatives and senators and convince them of the critical importance of this legislation.

Take ACTION: Click HERE to send a message to Illinois Congressional members in the U.S. Senate and U.S. House to urge them to support this legislation. Let them know that creating human life for the purpose of experimentation is wrong.

Our Founding Fathers firmly believed that God was the author of life and gave that right preeminence in the Declaration of Independence:

But do not neglect the next very next phrase:

That to secure these rights, Governments are instituted among Men, deriving their just powers from the consent of the governed.

Friend, “the governed” are you and me. We give consent.

Join us and stop the unthinkable. Stop immoral experimentation on human embryos.

This day I call the heavens and the earth as witnesses against you
that I have set before you life and death, blessings and curses.
Now choose life, so that you and your children may live.