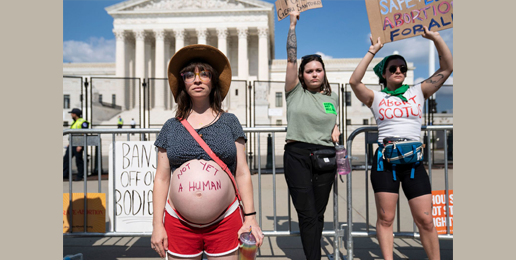 “For we do not wrestle against flesh and blood, but against the rulers,
against the authorities, against the cosmic powers over this present darkness,
against the spiritual forces of evil in the heavenly places” ~Ephesians 6:12

The sexual revolution/hook-up culture, feminism (post-first wave), and the anti-human abortion culture advanced by two wrongly decided U.S. Supreme Court cases have wreaked havoc in America, destroying marriage, families, and children and turning women into raging, promiscuous harpies devoid of wisdom, sexual continence, modesty, and natural maternal instincts. The harpies are everywhere now, shrieking in the streets from sea to shining sea about a mythical constitutional right to sacrifice their own babies.

In a shameful and embarrassing display of intemperance, incivility, and ignorance, Chicago’s lesbian mayor Lori Lightfoot—who has borne no children—shrieked “F**K Clarence Thomas following his correct assessment that there is no constitutional right of mothers to order the killing of their human offspring.

Lightfoot shrieked this comment at a “pride” event, because she is miffed that Justice Clarence Thomas suggested the Griswold, Lawrence, and Obergefell decisions should be revisited to determine if they were wrongly decided as well.

Lightfoot, who must have slept through some law school classes, appears not to understand the argument Justice Thomas (as well as Antonin Scalia, Hugo Black, Robert Bork, and perhaps Neil Gorsuch) is making. Thomas is making a constitutional argument regarding the substantive due process doctrine. He is not making a moral argument about contraception, homo-sodomy, or homo-pseudomarriage.

In Dallas, harpies in the throes of orgiastic spasms, twerked convulsively like women in need of exorcisms. What public twerking has to do with the legal right to have their preborn babies slaughtered is anyone’s guess. My guess is that they are saying the slogan “my body, my choice” means they can do whatever they want with their bodies no matter how it affects other humans.

“Shakin dat a** so we can kill our babies, proud to be a hoe and not to be a ladies” pic.twitter.com/tyTCEbDXhr

That seems to be the message of the topless women at the twerking festival and those who stormed a WNBA game in early June, following the release of the Dobbs draft opinion written by Justice Samuel Alito. The bloodthirsty libertines among us use public nudity in defense of their belief that killing living preborn humans with their own unique DNA is a private act affecting only the libertines.

On Friday night, a murder of crows descended on the Arizona Capitol, screaming, pounding and kicking windows in an attack that looked remarkably like Jan. 6. Either Jan. 6 was not an insurrection or the assault on the Arizona Capitol was, and there needs to be some arrests and a selective select committee hearing conducted by a partisan panel.

In the Arizona Insurrection and every other post-Dobbs/post-Roe protest, we see men—whom we’ve been long told have no right to speak about abortion—speaking about abortion. They’re not speaking freely about having their children killed. No, they’ve been neutered, censored, and instructed by harpies. America’s emasculated men commanded by harpies—not to support the babies they co-create but to support the destruction of their own progeny—dutifully scream alongside their harpies.

The childless Kamala Harris believes this is a winning argument. Instead of calling for men to marry women before they have sex with them, to remain sexually monogamous, and to support the children they procreate, Kamala Harris appeals to parents to think about what banning the slaughter of their own grandchildren will mean for their sons. To Harris, it means fewer choices for their sons.

Harris is right. Marrying women prior to sexual relations, remaining sexually monogamous, and supporting their own children does, indeed, limit the choices of men. No more hook-ups, no more profligacy, and, it is hoped, far fewer dead children.

KAMALA: "If you are a parent of sons, do think about what this means for the life of your son and what that will mean in terms of the choices he will have." pic.twitter.com/PFRBDx9bl0

Perhaps the most grotesque comment made by a public figure came from former RINO, now Democrat pundit, Anna Navarro, who defended genocide committed against the disabled because their disabilities make life difficult for others. She cited as evidence her own living relatives.

In addition, she implied that people of faith have a right to be “Catholic [as she claims to be], or Christian, or Baptist” inside the church only. Clearly, she doesn’t understand the First Amendment.

Today’s female (whatever “females” are) protestors are calling for a sex strike à la Aristophanes’ play Lysistrata, but whereas the women of the Greek city-states, grieving the loss of their sons in the Peloponnesian War, wanted killing to stop, today’s murderous crows pledge a sex strike to ensure the deaths of their own children.

And then there is the viral video of an “influencer” who goes by the moniker Mama Gena, real name Regena Thomashauer. She records herself dressed in tattered lingerie, screeching like a proverbial banshee. She speaks few words other than a barely intelligible obscenity, because today feelings matter more than rational discourse. And since feelings matter more than words, inarticulate animal sounds matter most of all in that they convey really, really DEEP feelings.

She needs to fix the label on the back of her top so that it doesn’t show. Small, seemingly insignificant details like that really influence how people think of you. pic.twitter.com/034yRhzktl

“Mama Gena” is a 66-year-old former actress and current snake oil saleswoman (whatever “woman” is) who promotes eroticism as empowerment. She sells workshops and two reportedly poorly written books titled Pussy: A Reclamation and The School of Womanly Arts.

She also has an Instagram account with embarrassing photos and videos of the elderly Mama Gena prancing about in lingerie. In one Instagram video, she cackles loudly in a restaurant as a “dom”—that is, a male dominatrix—hired by her daughter puts a leash and dog collar on her and leads her around the streets of New York City. To modern feminists, bondage, promiscuity, and death = freedom, respect, and choice.

Now that abortion has been returned to the states, Americans who believe that even imperfect humans have rights, that the solution to poverty is not human sacrifice, and that the desire of women to be free from burdens does not justify killing other humans, have a lot of work to do. Parents and faith leaders have a lot of work to do to change the hearts and minds of a culture and to help struggling moms. Let’s get about our Father’s business.