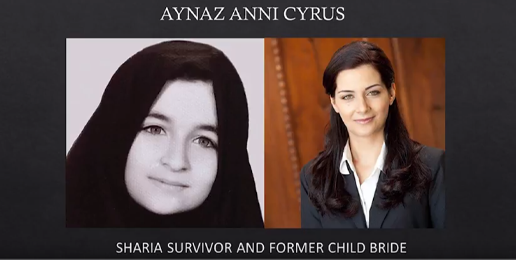 Islam, Muhammad, life in Iran, Sharia – how knowledgeable are you on these topics? Anni Cyrus is well-acquainted with all of them. She was born in Iran to a father who was a sheikh and a mother who taught the Quran. At age seven she began to wear the hijab to school; at age nine she first wore the full burqa and was officially certified as an “adult woman.” When she was barely into her teens, her father married her off to a man who gave him $50 (USD) and a month’s supply of opium. Ms. Cyrus knows all too well the horrific oppression of women under the dictates of Sharia in Iran.

Anni Cyrus also knows that Muslim girls and women in the United States are not immune from the abusive and controlling tactics that Sharia inflicts on females. Forced marriage, honor-based domestic violence, honor killing, and female genital mutilation are routinely practiced not only in the Middle East and other foreign regions, but also in our own country. Ms. Cyrus’ personal story and the facts and truths she shares can be uncomfortable to hear and view, but our discomfort is infinitesimal compared to the “legally” sanctioned pain these women experience through physical and mental abuse, mutilation, and even murder. We cannot afford to remain ignorant or silent on the evil of Sharia.

Please watch and share this video of Anni’s testimony with your friends to help them become better informed about Sharia: