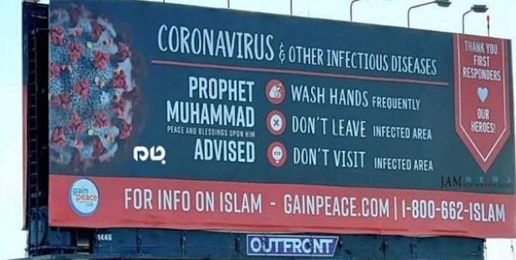 GainPeace, an enterprising Islamic organization in Chicago, has found a way to use coronavirus to promote Islam in the United States. The activist organization is a leading dawa (Islamic proselytizing) group that has placed billboards which sponsor a message from the prophet of Islam about health precautions. Excellent timing during the COVID-19 pandemic, but dangerously deceptive.

The overly simplistic advice is essentially good and in keeping with modern health standards. But many Muslim groups and pro-Islam spokespersons like Dr. Craig Considine are twisting it to advocate for Muhammad’s divine knowledge about health issues.

Dr. Sabeel Ahmed, GainPeace director, is a prolific public speaker and apologist for Islam. He has made the organization a pace-setting advocacy group for Muslims, and a dynamic promoter of Islam in the USA.

GainPeace and Dr. Ahmed are determined to find views that modern Western audiences respect and apply them to add credibility to Muhammad as a prophet. Coronavirus billboards around Chicagoland, sponsored by GainPeace say: “Coronavirus, Muhammad advised: Wash hands frequently, Don’t leave infected areas, Don’t visit infected areas.” It is reasonable, albeit rudimentary information, something your grandma would have said.

Noteworthy is that Muhammad’s words are taken out of context. The prophet of Islam was urging his followers not to flee from Allah’s punishment, and accept it by staying in the infected town.

Twisting scriptures to serve his purpose is not something new for GainPeace director. Dr. Ahmed has before published online videos that extol the wisdom of Muhammad’s medical guidance as a means to acclaim the Prophet’s role as the spokesperson of Allah; the Creator.

Religious zealots of any religion are susceptible to bias, which leads them to make absurd claims. In the West, Muslims who are practicing Dawa are often extreme examples of this.

Unfortunately, GainPeace and Ahmed are attempting to make credible the terrible idea that Muhammad is a trusted source for modern medical guidance. This would not be a matter of concern except that it also raises Muhammad’s medical views to the level of divine guidance. Therein lies the danger.

For example, Muhammad mistakenly thought that water was always healthy and pure. No exceptions. A Sahih (authentic) saying of Muhammad clearly makes such bad advice:

“I heard that the people asked the Prophet of Allah: Water is brought for you from the well of Buda’ah. It is a well in which dead dogs, menstrual clothes and excrement of people are thrown. The Messenger of Allah replied: Verily water is pure and is not defiled by anything.”

In a second example, based on a hadith report that is considered sahih (authentic), Muhammad prescribed camel urine as a cure. In light of the present COVID-19 crisis it is hard to even recall the 2012 Middle East Respiratory Syndrome (MERS) issue, but at the time, MERS was a viral respiratory illness new to humans. First reported in Saudi Arabia, it spread to several other nations, including the U.S.A. The World Health Organization repeatedly cautioned Muslims to not drink camel urine, which in the view of many Muslims went against the medical advice of Muhammad.

Both the authoritative compilations on hadith Al-Bukhari and Muslim record this event:

“Some people from the tribe of `Ukl came to the Prophet and embraced Islam. The climate of Medina did not suit them, so the Prophet ordered them to go to the (herd of milk) camels of charity and to drink, their milk and urine (as a medicine). They did so, and after they had recovered from their ailment (became healthy).”

This recommendation for camel urine, as so-called Prophetic Medicine, is still a live issue in Muslim-majority societies. Proof is a 2018 Newsweek article that reported on the Muslim religious leader Bachtiar Nasir drinking camel urine.

This is what makes Dr. Ahmed’s promotion of Muhammad as a legitimate source of medical expertise so unsafe for American Muslims. We must not encourage a pseudo-scientific promotion of Prophetic Medicine. While the GainPeace billboards give practical advice, they are taken out of context, and readings of sahih, would draw Muslims to dangerous behavior. Posting them to promote Muhammad’s medical insight is not just irresponsible but deadly.

Darrell Pack is an Arabist and an Illinois’ Islamic Reform Forum Board Member. This article was originally published at JihadWatch.org.