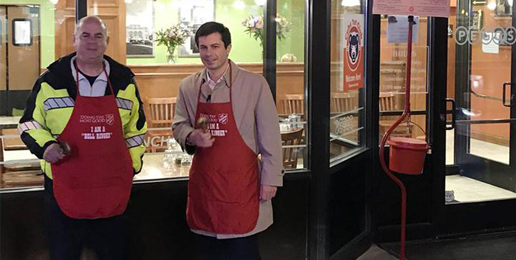 You Will Never Be Gay Enough For The Fascists
12.09.19
PRINT

Let’s stop the pretense. Let’s break down the façade. Let’s retire the con.

Even if you’re gay.

Anyone who reads my work knows that I’m not one to defend South Bend Mayor and Democrat presidential candidate, Pete Buttigieg. His politics are regrettable, and his galling effort to co-opt the language of Christianity to feign justification for those politics is repugnant.

Still, it’s merely a statement of obvious fact that his ascension to the presidency would represent a jaw-dropping affirmation of gay normalization and acceptance in mainstream American society. Anyone whose primary motivation was the advancement of the LGBT experience would be elated at such a prospect. Pete Buttigieg, in the realest sense, is the embodiment of everything such a person could desire: he is young, in a committed gay marriage, articulate, is disarming and mild-mannered, boasting a high quotient of electability.

But he’s not gay enough.

Don’t misunderstand – no one is accusing Mayor Pete of being a closet heterosexual. But remember, this modern LGBT political movement, one that liberal comedian Bill Maher once dubbed the “gay mafia,” isn’t impressed that a person checks even a majority of the boxes. You’re either all-in with their demands, or you’re out. That’s why this just happened:

2020 presidential candidate Pete Buttigieg was rebuked by LGBT advocates after a two-year-old photo surfaced of the South Bend mayor volunteering as a Salvation Army Christmas Kettle bell-ringer to collect money for the needy.

The LGBT website Out published the photo Tuesday, along with some angry reactions.

And those angry reactions spanned anywhere from “you ought to be ashamed of yourself” to “you’re dead to me.” So here you have an absolutely viable, openly gay presidential candidate, and yet the gay political lobby wants to destroy him because he doesn’t hate the Salvation Army enough? That’s crazy. Scary crazy, to be precise.

It defies logic until you understand that what drives this movement is not tolerance. It’s hate. Atlantic columnist Andrew Sullivan, a gay man who married his male partner over a decade ago, put it succinctly: 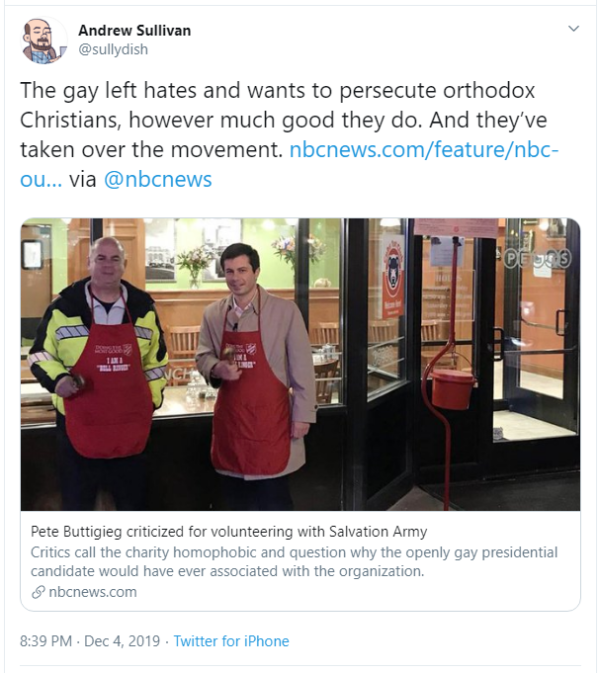 There’s no doubting the fact that Sullivan is right. And here’s why that should be so alarming to the sane among us. In 1932, the Italian dictator Benito Mussolini outlined his doctrine of fascism, stating,

“The Fascist conception of the state is all-embracing; outside of it, no human or spiritual values can exist…the Fascist State…interprets, develops, and potentates the whole life of a people.”

In its place there is only force and intimidation, and a nefarious, painfully transparent attempt to harness the power of the state to demand we all think, act and believe like them. Even if, as in the case of Pete Buttigieg, we literally are them.

Leftists Canceling and Cannibalizing Their Own