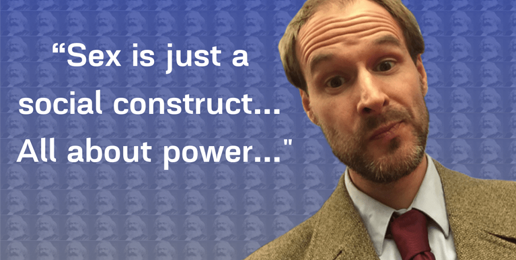 In an essay published by the online magazine Quillette titled “‘I Basically Just Made It Up’: Confessions of a Social Constructivist,” Christopher Dummitt, associate professor of Canadian Studies at Trent University, confesses to “making up” his argument in defense of the dubious proposition—now widely accepted in academia as well as the culture at large—that “gender” is a social construct.

The view he promulgated through a book published in 2007 and an article based on his master’s thesis that the differences between males and females that are observed in virtually all cultures throughout history are wholly constructed by culture, he now rejects. He also admits the thinness of his past support for this thesis, which was built on little more than the regnant ideology in academia during the 1990’s when he identified as a “gender historian.”

My flawed reasoning, and other scholarship using the same defective thinking, now is being taken up by activists and governments to legislate a new moral code of conduct.

While issuing his mea culpa, Dummitt makes the troubling but not surprising claim that he “wasn’t alone. Everyone was (and is) making it up. That’s how the gender-studies field works.”

The first step was to exploit “cultural and historical variability” to suggest that superficial cultural and historical differences in, for example, clothing styles for men and women, is conclusive evidence that maleness and femaleness are wholly separate from biology. Dummitt and his ideological confreres viewed (or used) variation across time and history in styles associated with men and women, as proof that not only was “gender” socially constructed but also that “Gender wasn’t binary: It was variable and maybe infinite.”

The second step involved linking gender differences to power differences. Dummitt explains that “power was, and remains, a kind of magical word in academia.” Its magic lies in its use as a kind of ideological shield to thwart all challenges to gender theory dogma. Any dissenter who dares to express support for biological or gender essentialism (i.e., the “belief that males and females are born with distinctively different natures, determined biologically rather than culturally”) is viewed as “making excuses for power. They were apologists for oppression.”

The final step in developing his thesis was to “cherry pick” from the vast reaches of history particular moments that could offer plausible reasons for society to want or need sex role differences that would then be socially constructed. In other words, rather than merely observing the way or ways sexual differences manifested culturally at a specific historical moment, Dummitt saw the historical context as the cause of socially constructed gender differences.

Of course, it would be possible to look at the same material and come out with entirely plausible alternative explanations…. My research didn’t prove anything either way. I just assumed that gender was a social construct and proceeded on that basis…. Yes, there are variations over the life cycle, and some cultural and historical particularities. But if you didn’t start your research assuming that the small differences must matter greatly, it’s not clear that you would conclude this from the evidence.

Unfortunately, the wholesale cultural adoption of the ideology Dummitt now rejects and which denies the reality and meaning of biological sex will not be easily relinquished even as its sandy foundation is exposed.

This article was originally published by our friends at Salvo Magazine.