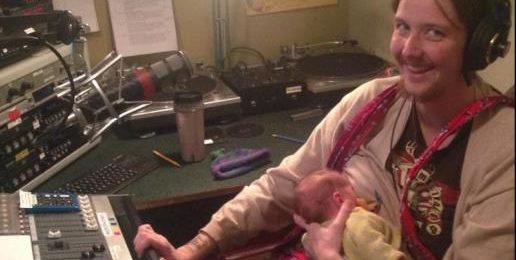 In our mad, mad, mad, mad world, Canadian mother Kori Doty hopes to raise her child, named Searyl Atli but called Sea, in such a way that baby Sea’s objective biological sex will have no meaning relative to Sea’s “gender identity.” Doty’s dream for her child is that he or she be free to “self determine their own gender” at some undetermined time in the future. And by “they” Doty means Sea. Although, Doty can’t yet obtain a genderless birth certificate for her baby, she was able to obtain a genderless national health ID card.

In the service of Doty’s twisted dream, she refers to Sea using the pronoun “they,” refuses to share Sea’s sex publicly, is trying to obtain a birth certificate that doesn’t record any sex, and dresses Sea in clothing that is either gender neutral or associated specifically with either boys or girls.

Doty describes herself as a “non-binary genderqueer trans person” whose history offers a troubling glimpse into her clearly troubled mind:

I grew up in a fairly conservative Protestant church…. When I was 17, I left home for a year on an international exchange, started reading and exploring outside the small world I had come from. I learned to drink, kiss girls, and question authority. Within a few years of that I…had my first group sex experience, started exploring psychedelics and was on my way towards the words I would later mind [sic] comfort and identity in. Words like trans, genderqueer, queer, pansexual, polyamorous, butch, femme, nonbinary, gender rebel, psychonaut, and witch were just around the next bend…. I’ve struggled with mental illness, explored gender transitions, [and] explored fertility + pregnancy….”

Doty now makes her living as a “community educator and personal coach”—I kid you not. Her coaching focuses on “gender, sexuality, healing, political work, and substance use, including harm reduction and psychedelic support.” She also facilitates discussions at “adult sex-ed parties” on sex toys, “kink,” threesomes, gender exploration, swinging and sex parties.

On her blog, Doty extols http://koridoty.com/?p=547 the fluid, transient relationships she views as family—relationships that don’t include a father for Sea:

I am incredibly grateful to feel supported as a single parent. The extended rings of our family include room mates, dates (and kids of those who have some), dear friends/exes turned aunties and uncles, space cousins and their parents (space cousins is a term invented to explain the relationship between Sea and the other kid(s) who share a sperm origin, without sharing parents.)

Doty’s description of one of her podcast topics reveals that she has lost any sense of right and wrong and so cannot distinguish what types of behavior should be considered shameful:

In an effort to stimulate healthy conversations about sexuality in the wake of stigmatizing distractions…the upcoming episode of Sex, Drugs and How We Roll will be about piss play. Cause there doesn’t need to be anything shameful about getting off on the mostly sterile fluids excreted from consenting adults.

Do you like to get wet + wild? Wanna come on the air and talk about consensual involvement of urine in sex and/or kink?…. This is how we diffuse the distractions to see the truth underneath.

Ontario recently passed a law (similar to a policy change made by the DCFS in Illinois) that makes it possible for the government to refuse to place children with foster or adoptive families that reject the body- and soul-destroying, science-denying “trans”-affirmative ideology and perhaps even remove children from homes in which parents or guardians reject such an ideology. Meanwhile a cross-sex-hormone-doping, bearded woman who endorses sexual perversion can purchase human genetic material (i.e., sperm) and raise a child whose sex the mother refuses to affirm as not only immutable but profoundly meaningful and good.

In a recent editorial, Leonard Pitts, far Left syndicated columnist and supporter of virtually every doctrinaire and destructive far left dogma including co-ed restrooms, described Doty’s parenting decision as a “bridge too far.” He asserts that it’s “just silly” to believe that it’s “a sin against enlightenment” to identify a baby’s sex.

Unfortunately, Doty is not alone in her delusionary belief in the unimportance of sex differences.

In 2011 Canadians David and Kathy Stocker-Witterick made headlines when they announced they were not sharing publicly the sex of their third child Storm. They dismissed Storm’s sex while awaiting the day when Storm would reveal his or her “gender identity” and which pronoun he or she preferred.

Well, 6 ½-year-old Storm’s sex is still unclear, but Storm has chosen to be referred to as “she.” Storm’s oldest sibling 11-year-old Jazz is a boy who identifies as ‘trans” (not to be confused with the other boy called Jazz who pretends to be a girl on the TLC show “I am Jazz”). Jazz has chosen to use the plural pronoun “they.” Jazz and Storm have another sibling, 8-year-old Kio who identifies as “non-binary” and uses the plural pronoun “they.” Mother Kathy too uses the pronoun “they,” and dad David goes by “he” or “they.” Proving they’ve moved beyond the binary, dad David has been known to dye his hair pink and mom Kathy shaves half of her hair while wearing the other half in long, flowing tresses. Yes, nothing says moving beyond the binary quite like donning both male and female hairstyles. 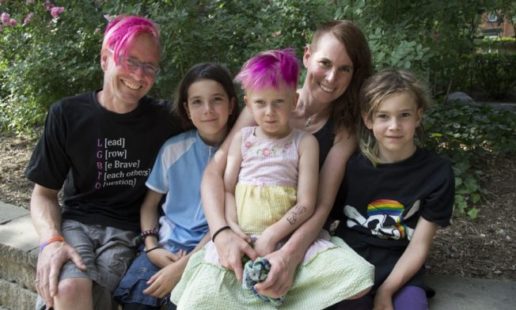 It’s not just a few misguided (or rebellious) parents who are adopting the “trans” cult ideology. Sweden, once again proving what a collectively foolish nation it has become, jumped on the speeding “trans” train long ago. Slate Magazine exposed how deeply invested in eradicating public recognition of sex differences Sweden is. Here’s what Slate found in 2012:

So much for freedom and autonomy.

Foolish people like these Swedish biological sex-rejecters and Doty bristle at social conventions associated with males and females, thus denying that such conventions emerge from, reflect, and reinforce anthropological truths. Humans in every society throughout history have recognized that men and women are different. Even homosexuals acknowledge that truth. When homosexual men and women claim they are romantically and erotically attracted only to members of their same sex, they are implicitly acknowledging that men and women are inherently and significantly different and that those differences are not only anatomical.

Social conventions reflect and reinforce the good architecture of sexually differentiated human life. Social conventions for men and women were not created out of whole cloth or manufactured from the fertile imaginations of patriarchal oppressors. They emerged from human nature.

Historically, societies have believed that the fact of biologically determined sexual differentiation was a good thing and should be cultivated.  Societies recognized what self-proclaimed homosexuals recognize: men and women are different. Cultures developed patterns of behavior and societal roles that reflected, codified, encouraged, reinforced, and sustained sexual differentiation, which is mostly a good thing. That said, though social conventions emerge from, reflect, and reinforce truths about men and women, they don’t dictate our lives or reflect the totality of any individual person.

Of course, humans, being fallen creatures, err. Men and women have deformed their roles and responsibilities and corrupted their natures in myriad destructive ways. Through pride, fear, and selfishness, they have variously abused and abdicated their natures and their roles; and unthinking societies have at times become too restrictive regarding what roles men and women could or should assume or behavioral expectations.

It is good for societies to encourage sexual differentiation through some expectations regarding dress and behavior. Of course, what that looks like will change over time and across cultures.

It is, at minimum, benign to paint the nursery walls of a baby girl pink and baby boy blue. It is profoundly harmful for boys to dress and act like girls or vice versa. It is harmful for women to don beards and men wear lipstick. And it is harmful to suggest to children that their objective, immutable biological sex is subordinate to their subjective feelings when it comes to their maleness or femaleness.

But the Left does not seek to work at ensuring reasonable gender expectations but, rather, to eradicate all gender differences. Even the liberal Slate Magazine writer knows where the “trans” ideology is heading:

[F]or many Swedes, gender equality is not enough. Many are pushing for the Nordic nation to be not simply gender-equal but gender-neutral. The idea is that the government and society should tolerate no distinctions at all between the sexes.

That’s where America is heading as well. “Trans” cultists and their ideological allies seek to eradicate all public recognition of and respect for sexual differentiation in all contexts for everyone. An 18-year-old “trans”-identifying young man who pretends to be a woman called me last week. He shared that he hopes for a day when there are no more single-sex facilities anywhere for anyone. To him, neither feelings of modesty nor the desire for privacy are linked to objective, immutable biological sex. The science-denying “trans” ideology, buttressed by the convergence of pseudo-science, Gnosticism, and radical subjectivism (bordering on solipsism) is destroying lives and creating moral, social, and political anarchy.

Have you given the IFA weekly podcast a listen yet? Illinois Family Spotlight highlights cultural and political issues of particular interest and relevance to Christian conservatives in Illinois. You can find Spotlight on podcast applications like Google Play Music, iTunes, SoundCloud, Pocket Casts, and Stitcher.  You can also listen to our podcasts HERE on our website.