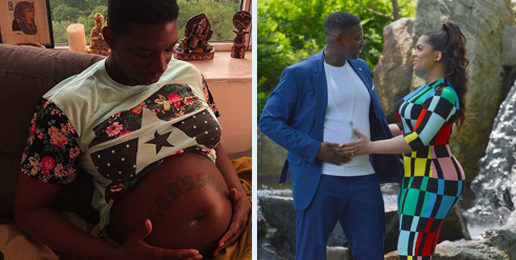 How’s that for a head-scratcher of a quote—a quote that actually appears on the no-longer reputable NBC 5 Chicago “news” website  in a story about two “trans”-cultists who are married and recently had a baby. The pretend-wife is “Precious” Brady Davis,” a biological man who pretends to be a woman. The pretend-husband is “Myles” Brady Davis, a biological woman who pretends to be a man. Myles-the-real-mother is the director of communications and press secretary for Illinois’ premier “LGBTQ” propaganda organization, Equality Illinois. This woman really knows how to spread propaganda.

The “trans power couple” are in the news again, and again they’re in the news for pernicious reasons. When Myles was 20 weeks pregnant, she learned that she would be listed as the baby’s mother on the birth certificate, because she is, well, the mother.

As “trans”-cultists and propagandists so often do, Myles contacted an attorney with Lambda Legal who contacted the Illinois Department of Public Health, which immediately cried uncle … or aunt … or something. Suffice to say, the state caved to the “trans”-cultists.

According to the Chicago Tribune, Myles-the-real-mother “never even thought the birth certificate would have to misgender us.” Yeah, riiight. She never thought a legal document would include the objective fact that she is the mother.

The Tribune writer, Nara Schoenberg, evidently a propagandist for the “trans” cult who identifies as a news reporter, described the possible identification on the birth certificate of the biological father as the father as making “matters worse.”

To have biological children, they had to go off their gender-reinforcing hormones.

Schoenberg needs to take classes in both biology and leftist sexuality ideology. Does she know what hormones are? Does she know what “gender” is in the “trans” world she seeks to suck up to? Gender—according to “progressives”—is the aggregate of arbitrary, socially constructed conventions associated with maleness or femaleness. Hormones are chemical substances produced in the body that control and regulate the activity of certain cells or organs. Hormones can’t and don’t reinforce “gender.” 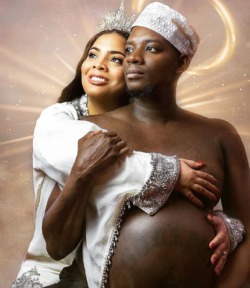 Word to Mommyish, while Myles’ cross-dressing and cross-sex hormone-doping is clearly an effort to conceal her sex (or as Mommyish calls it, “defy stereotype”), the photo of a mother heavy with child is the anti-thesis of a “stereotype.”

“Trans”-cultists use the fact that language changes over time to try to compel others to use their redefinitions of words and the neologisms they invent to advance their strange, science-denying, metaphysical ideology. Now they want to redefine the words “mother” and “father.” They no longer want those terms to be linked to biological sex. Instead, they want “mother” to denote humans who wish they were women and “father” to denote humans who wish they were men.

Well then, why not redefine the word “teenager”? Henceforth, it will no longer denote a human whose objective age is between 13-19 but, instead, denote humans who feel like, wish they were, or identify as teens?

While we’re thinking about language, let’s remember what George Orwell said about the abuses of language for oppressive political ends (i.e., Newspeak), which points to the importance of resistance to such abuses:

[W]ords which had once borne a heretical meaning were sometimes retained for the sake of convenience, but only with the undesirable meanings purged out of them. (emphasis added)

So, “trans”-cultists have struck another blow against science and reality. Illinois birth certificates will no longer “misgender” “trans”-cultists. They will now mis-sex them. (As an aside, the long-ridiculed flat-earthers must be so jealous.)

Some of us remember the good old days when teachers asked elementary school children to scour the newspaper for current events. If we want children to learn about reality, teachers better not ask them to do that anymore.

It’s remarkable that seemingly rational, sane people in academia, the professional medical and mental health communities, the arts, faith communities, and the press pretend to believe the emperor in a gown is an empress. We should no longer be baffled by the ignorant and destructive ideas people believed or, because of their cowardice, pretended to believe in days gone by.