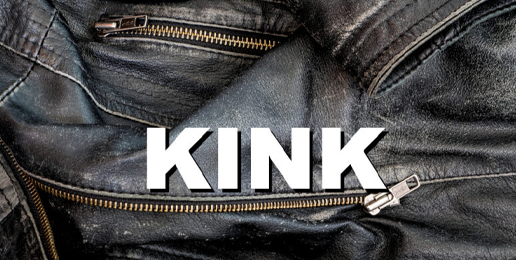 Writer Lauren Rowello’s peculiar perspective on attending a “pride” parade with her husband and young children five years ago was published in the Washington Post on June 29, 2021 and provides yet more evidence of the existence of the slippery slope leftists deny:

[O]ur elementary-schooler pointed in the direction of oncoming floats, raising an eyebrow at a bare-chested man in dark sunglasses whose black suspenders clipped into a leather thong. The man paused to be spanked playfully by a partner with a flog. “What are they doing?” my curious kid asked as our toddler cheered them on. The pair was the first of a few dozen kinksters who danced down the street, laughing together as they twirled their whips and batons, some leading companions by leashes. At the time, my children were too young to understand the nuance of the situation, but I told them the truth: That these folks were members of our community celebrating who they are and what they like to do.

Oh, what a merry image Rowello tries to rhetorically construct, but not even her references to playfulness, cheering, dancing, laughing, and twirling can conceal the grotesque event she seeks to defend.

The mentally and morally unwell Rowello, who claims to possess “expertise” in “mental health” and “queer identity,” describes herself as,

a gendervague person who is married to a trans woman, topics related to gender and queer identity are an important focus of their [sic] work. Lauren is a former sex worker and teen parent. … A Philadelphia area native, Lauren is an autistic person raising two neurodivergent kids in South Jersey. They [sic]homeschool and spends lots of time in the garden.

Apparently, Rowello views “pride” parades as homeschool field trips, yet more opportunities to indoctrinate her children and all other children with perverse views of sexual morality:

[P]olicing how others show up doesn’t protect or uplift young people. Instead, homogenizing self-expression at Pride will do more harm to our children than good. When my own children caught glimpses of kink culture, they got to see that the queer community encompasses so many more nontraditional ways of being, living, and loving. … If we want our children to learn and grow from their experiences at Pride, we should hope that they’ll encounter kink when they attend. How else can they learn about the scope and vitality of queer life? … Children who witness kink culture are reassured that alternative experiences of sexuality and expression are valid.

“Kink” is an umbrella term that encompasses all manner of sexual deviance. Once again, the desperately wicked human heart is proving capable of inventing and enjoying the most peculiar, repulsive, and degrading uses of the human body, justifying such practices by deeming them integral to “authentic identity.” As long as an act is “consensual,” it is moral—in the view of sexual regressives.

Decades ago, leftists began the largely successful effort to normalize homoeroticism—to set it apart from other forms of sexual deviance. The disordered desire to engage in homoerotic acts morphed into “authentic identity”—that is to say, “who they are.”

Next came the effort to normalize cross-sex identification, which is still going gangbusters but finally receiving some serious pushback.

Largely behind the scenes but peeking out from its dark corner is the movement to normalize polyamory—or as its practitioners prefer to call it “consensual non-monogamy.” (There it is again, that tricksy little all-purpose term “consent.”)

And now we’re seeing the unholy effort to expand the infinitely elastic boundaries of “normal” and “identity” to include fetishes.

Every year, heated debates about the appropriateness of kink in “pride” parades take place within the “queer” community. Rowello counters,

Anti-kink advocates tend to manipulate language about safety and privacy by asserting that attendees are nonconsensually exposed to overt displays of sexuality.

Those leftists, including some homosexuals, perhaps sensing the intrinsic moral offense of kinky sexual practices, object to their presence in “pride” parades. The problem for the objectors is that decades ago, while working feverishly to normalize homoeroticism, they jettisoned any and all appeals to a source of objective, transcendent morality. They settled on “consent” as the only criterion that determines whether acts are moral or immoral.

Since they made “consent” the only constitutive feature of morality, they now have to stretch and twist it into knots to justify their moral opposition to children being exposed to kink. Their argument goes something like this: Children who are brought by their parents to “pride” parades don’t consent to seeing men wearing dog collars and buttless chaps being flogged. Lacking a framework or language to justify their moral intuition about the immorality of children being exposed to kink, they absurdly resort to appeals to consent.

Rowello continues her counter-attack against those who want to ban kinksterism at “pride” parades:

The most outrageous claim is that innocent bystanders are forced to participate in kink simply by sharing space with the kink community, as if the presence of kink at Pride is a perverse exhibition that kinksters pursue for their own gratification. But kinksters at Pride are not engaged in sex acts—and we cannot confuse their self-expression with obscenity. … anti-kink rhetoric echoes the same socialized disgust people have projected onto other queer people. … Kink visibility is a reminder that any person can and should shamelessly explore what brings joy and excitement. We don’t talk to our children enough about pursuing sex to fulfill carnal needs that delight and captivate us in the moment.

Her objection to obscenity sounds downright puritanical compared to her advocacy of shameless self-indulgence in carnality.

One could make a reasonable case that the public flogging of bare buttocks by kinksters actually is an exhibition pursued for sexual gratification. And why should that bother Rowello? Rowello implies that engaging in public sex acts would constitute “obscenity” and would, therefore, be inappropriate at a “pride” parade.

But what if consensual public sex acts constitute for some “nontraditional ways of being, living, and loving”? What if engaging in public sex acts is “who they are and what they like”? What if some people delight and are captivated by public sex? By excluding those whose identities include public sex acts, wouldn’t Rowello be guilty of “policing who shows up” and “homogenizing self-expression”? In opposing public sex aficionados/identitarians isn’t Rowello expressing the “same socialized disgust people have projected onto other queer people”? 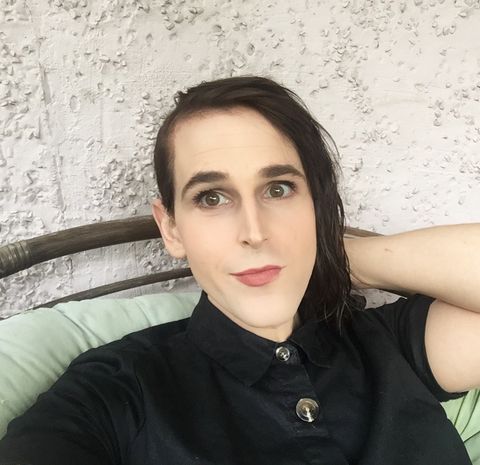 One of those “queer people” that Rowello likes to talk about is her 31-year-old, cross-dressing, cross-sex hormone-doping husband and the father of her two children, Brenan Duffy. In Vogue Magazine, Duffy (whom Rowello refers to as a “trans” woman) describes his struggles growing up with both a verbally abusive alcoholic father and gender dysphoria, which Duffy recasts as  his “true identity.” He shares his escape into his mother’s closet, wearing her gowns, swimsuits, and tight black skirts:

[H]er closet. … allowed me to step out of the constraints of my own literal and figurative closets into a world where I could safely explore what it meant to be me. … [T]his nook provided valuable refuge throughout my childhood and offered much-needed comfort in times of hardship and isolation. When my best friend died unexpectedly, when neighborhood bullies became unbearable, and during the worst of my father’s alcoholic episodes, it was my retreat.

Duffy attributes his own battles with “debilitating depression, cynicism, and alcoholism” to “false shame and decades of repression,” but could the impulse to reject his sex, like his depression and alcoholism, be caused by his father’s abuse and other factors? We aren’t supposed to ask questions like that. The disordered “queer” community to which Rowello and her unfortunate husband belong command the world—including all children—to affirm them and every deviant sexual practice they enjoy.

Don’t be deceived by the hollow faux-indignant howls that the slippery slope doesn’t exist. It does, and the howls you hear come from ravenous wolves.